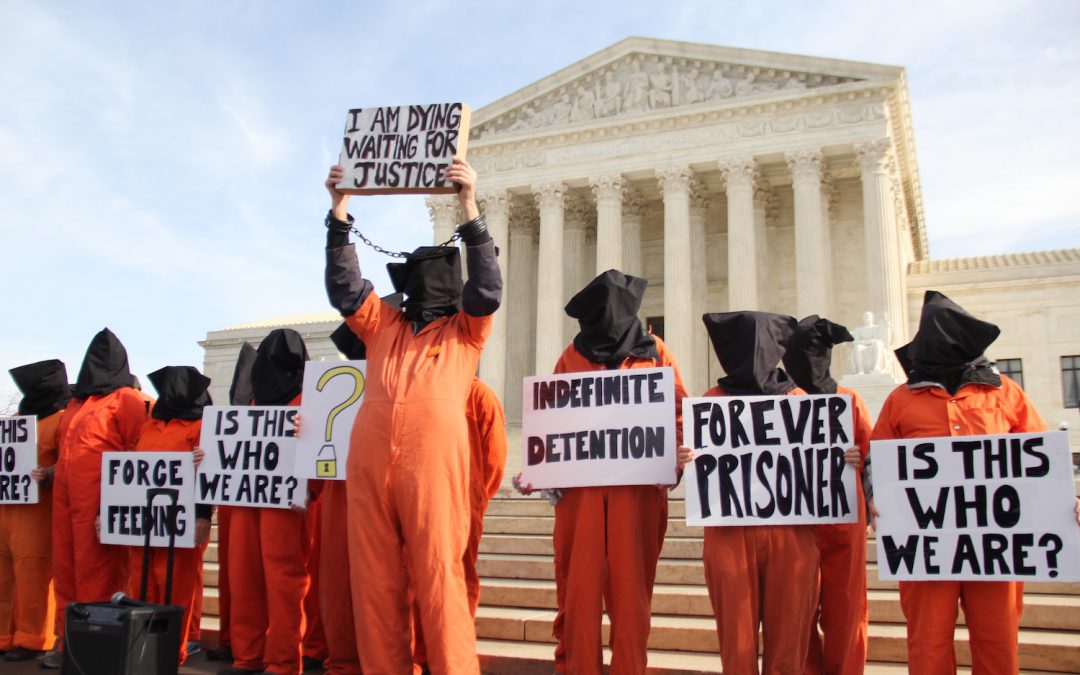 Protesters in orange inmate jumpsuits stand in front of the Supreme Court on Wednesday to demand the closure of Guantanamo Bay detention camp. PHOTO: Shahzeb Ahmed/MEDILL

WASHINGTON – A coalition of groups protesting the existence of the detention center at Guantanamo Bay, Cuba marched from the Supreme Court to the Senate on Wednesday, demanding that President Barack Obama close the prison as one of his final acts as president.

“We recognize that there have been many obstacles put in [Obama’s] way,” said Elizabeth Beavers, senior campaigner for Amnesty International, one organization participating in the Close Guantanamo Bay Coalition. “Congress has been incredibly obstructionary [sic], but the Obama administration made some really key missteps, and they missed moments when they had a political mandate.”

A dozen of about sixty protesters stood silently in a row wearing orange prison jump suits with black pillow cases over their heads as leaders criticized President Obama and expressed concern about the policies of President-elect Donald Trump.

President Obama “will tell you to the end he failed [in closing the prison] because of members of Congress,” said Andy Worthington, co-founder of the Close Guantanamo Coalition. While President Obama is right to acknowledge Republican opposition, he thought that the president “should have acted much earlier to overcome that resistance.”

“When it comes to Guantanamo, this is a time of a double disappointment, there is no other way in looking at it,” said Worthington. “President Obama failed to fulfill the promise he made eight years ago. I think Donald Trump is going to shut the door on Guantanamo immediately.”

In 2009, President Obama signed an executive order to close the detention center, which held 59 Muslim prisoners as of last month, according to the Miami Herald. President-elect Trump has said he would keep Guantanamo open and send even more prisoners there after he takes office.

Maha Hilal, executive director of the National Coalition to Protect Civil Freedoms, was another speaker. “As a Muslim I am calling for the prison to be shut, for the torture to end,” said Hilal. “As a Muslim, I can no longer accept this treatment.”