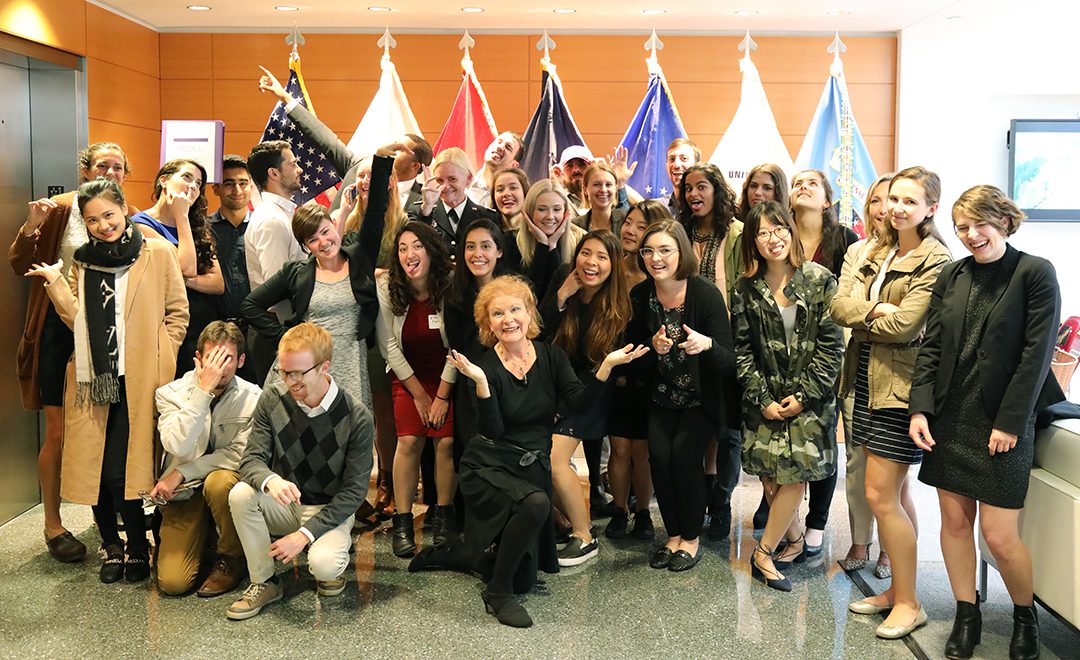 By David Thill and Samantha Yadron

The conference, Oct. 12-13 at Medill’s Washington newsroom, came as President Donald Trump announced policy changes that could significantly alter the Affordable Care Act. Against this backdrop, speakers representing major players in the health care system – from the insurance industry to the public health sector to the federal government – addressed 28 Medill graduate and undergraduate students on major issues in health care and the media’s role in covering it.

Funded by UnitedHealth Group, the conference was planned by Medill faculty and staff. In organizing it, faculty focused discussion on major topics in health care, said Ellen Shearer, professor, head of the Medill Washington and Special Programs Department, and co-organizer of the conference.

This year, the future of the Affordable Care Act played prominently. But as speakers noted, that’s not the only topic journalists need to watch.

“I do think, given everything around the Affordable Care Act, with ‘repeal and replace’ over the last year, the issue of drug prices has kind of fallen by the wayside,” Meghan Scott, executive director of the Coalition for Affordable Prescription Drugs, said following a panel on drug prices and drug shortages. That panel, in which Scott was joined by representatives from a leading pharmaceutical industry group and the federal Food and Drug Administration, focused in part on the potential for competition among drug manufacturers to prevent rising prices for patients.

“We’ve truly entered an entirely new era of medicine, where scientists have the ability to attack disease in entirely new ways, and are putting forth treatments that would have been considered science fiction even a decade ago,” said Robert Zirkelbach, executive vice president of public affairs at the Pharmaceutical Research and Manufacturers of America, or PhRMA. Better recognition by the media of those developments “is important to any conversation about biopharmaceuticals and health care costs overall,” said Zirkelbach, who had joined Scott on the panel.

“I think the innovation aspect of health really looks so different in the three years since we started covering this conference,” said Medill Assistant Professor Abigail Foerstner. She referenced trips attendees took to the National Institutes of Health and the Defense Health Headquarters, where new technology and scientific discoveries are bringing once unheard-of procedures – like regeneration of organs – closer to reality.

Another panel, featuring addiction experts from the federal government and public health sectors and an advocate who told a more personal story, was dedicated to discussing challenges for journalists reporting on the national opioid epidemic. “In the first year, opioids wasn’t even on the agenda. When we started, it was really just about reporting in the health care debate,” Shearer said.

A recurring theme during the conference was the need for journalists to understand the nuances of the massive American health care system. “In health care, there are so many apparently compelling anecdotes that may have a very complex set of facts behind them,” said Matt Stearns, vice president of external communications at Optum, part of UnitedHealth Group and a graduate of Medill’s master’s program.

And at a time when health care issues are politicized and prone to distortion, speakers emphasized that the media should resist sensationalism in favor of presenting an accurate picture to the public.

In other words, making audiences aware of health trends is different from scaring audiences, said Kim Miller, an epidemiologist at the American Cancer Society. She cautioned journalists to refrain from “fatiguing” readers by blowing new cancer research out of proportion and making diseases seem more common than they are.

Jon Lorsch, director of the National Institute of General Medical Sciences, had a similar message. “I was amazed by how many times cancer and diabetes had been cured,” he said wryly to conference-goers, referring to scientific discoveries made to sound like breakthroughs in the media.

Donna Leff, Medill professor and conference co-organizer, noted the impact the internet has had on journalism, particularly science reporting. Vast scientific information is widely available, “and vast mis-information also is widely disseminated through the internet and social media,” Leff wrote in an email following the conference.

Given that wide availability, challenges to peer-reviewed science are sometimes amplified “in ways that can be quite damaging to science and public health,” she wrote, citing as examples the anti-vaccine movement and claims that climate change is a hoax.

The prognosis: Health care is complicated. And as the ongoing debate over the future of the Affordable Care Act shows, it’s unpredictable. Given the right tools, however, journalists might begin to understand the complexities and help their audiences to do the same.