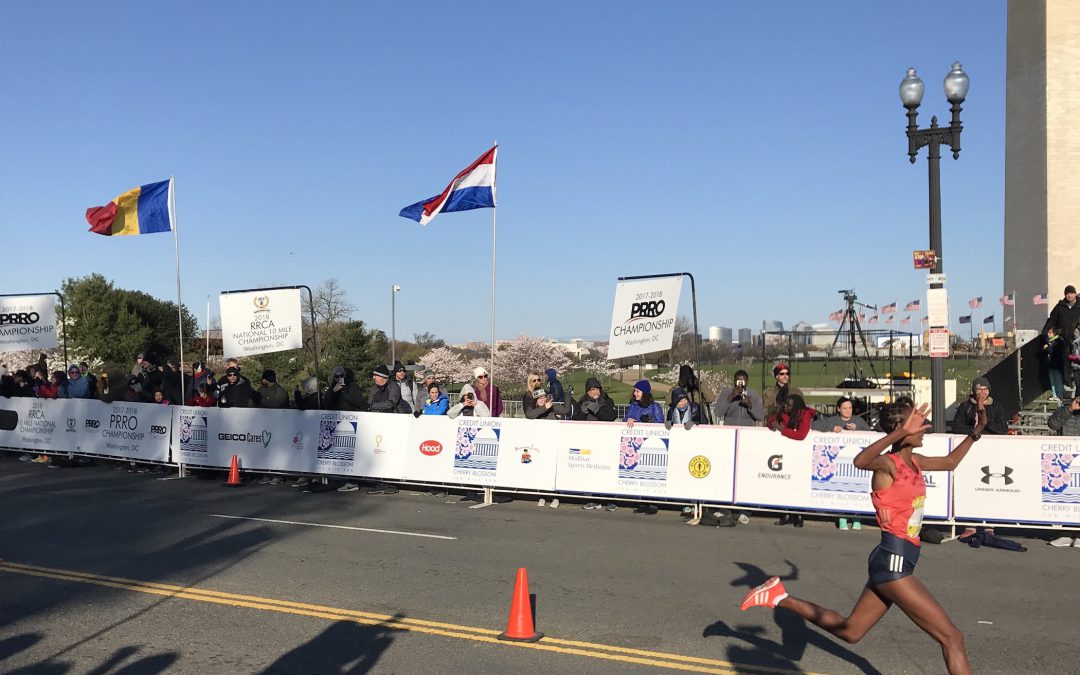 The race began at 7:18 a.m. at the foot of the Washington Monument with the elite women’s group. Sporting bib #8, Ethiopian Buze Diriba crossed the finish line first at 53:45, winning $18,000 for her first-place finish.

“It felt good, but it was cold this morning,” said the 24 -year-old Albuquerque, New Mexico, resident. Diriba said she is looking ahead to April 16 when she will be running a 5K as part of the 122nd Boston Marathon.

Spots two, three and four in the female division were claimed by fellow Ethiopians. Burundi-born Diane Nukuri, 33, of Flagstaff, Ariz., was the fastest American and fifth woman runner overall with a time of 53:56.

Although she led the female pack at 7:39 a.m., 25-year-old Emma Bates placed seventh overall and second among American women in her debut Cherry Blossom Run with a personal best. She noted that she wasn’t as fast as usual because of the wind and cold weather.

“It was really cold and we knew that was going to happen, so we started out more conservative than usual,” said Bates. “It was pretty windy at a lot of the points too so we were all trying to draft off each other.”

Finishing in under an hour at 54:45, Bates said the race really began at mile four.

“That’s when all the African ladies just took off, so it was me and a few other Americans running together for the last six miles,” recalled Bates. “We then got faster and faster, moving up in the race and I ended a lot faster than my first 5K.”

The elite females were also joined by U.S. Olympian Joan Benoit Samuelson, who, at 60, made her sixth appearance at the Cherry Blossom Run. Benoit Samuelson won the first-ever women’s marathon at the 1984 Summer Olympics in Los Angeles. She still holds the record for the fastest times ever recorded by an American woman at both the Olympic and Chicago Marathons.

The Maine native said she used this race to “chart her [running] course” moving forward and that she hopes to run in the Chicago Marathon in October.

Among the elite men, 21-year-old Jemal Yimer came out on top with a time of 46:17. This race marked his first visit to the U.S.

“I was a little bit cold and I wanted to run a little bit faster but wasn’t able to do that but had a great time,” said Yimer. “I really like D.C. and am looking forward to touring it after the race.”

In his inaugural appearance at the Cherry Blossom Run, the goal of North Carolina native Johnnie Crain was just to compete.

“This is such a great race, one of the fastest 10 milers in the country,” said Crain, 25. Crain ran with four other male teammates from ZAP fitness, a training center for post-collegiate, Olympic hopefuls.

Recovering from the flu, Crain hoped to rebound with this race, finishing 21st among males at a 4:55 mile.

“The last couple of miles coming in were running straight into the wind and unfortunately in no man’s land with no one to take the wind and block it for me,” said Crain. He is looking ahead to the USATF Half Marathon Championships in Pittsburgh on May 6.

Arlington, Virginia, resident Matt Centrowitz Jr., 28, placed 30th in overall men at 50:39. Centrowitz grew up in Maryland and was a track star at Broadneck High School in Annapolis.

“I ran close to what I wanted to but I felt kind of sluggish today,” said Centrowitz. “It was a tough week with training and the conditions were tough, but it went pretty well.”

The Nike athlete said he is “probably going to lay off the roads and start some track races.”

A rookie among athletes, 25-year-old Kaleigh Jacobson traveled from Syracuse, New York, to run in her first race.

“This is the most I’ve ever run so far,” said Jacobson.