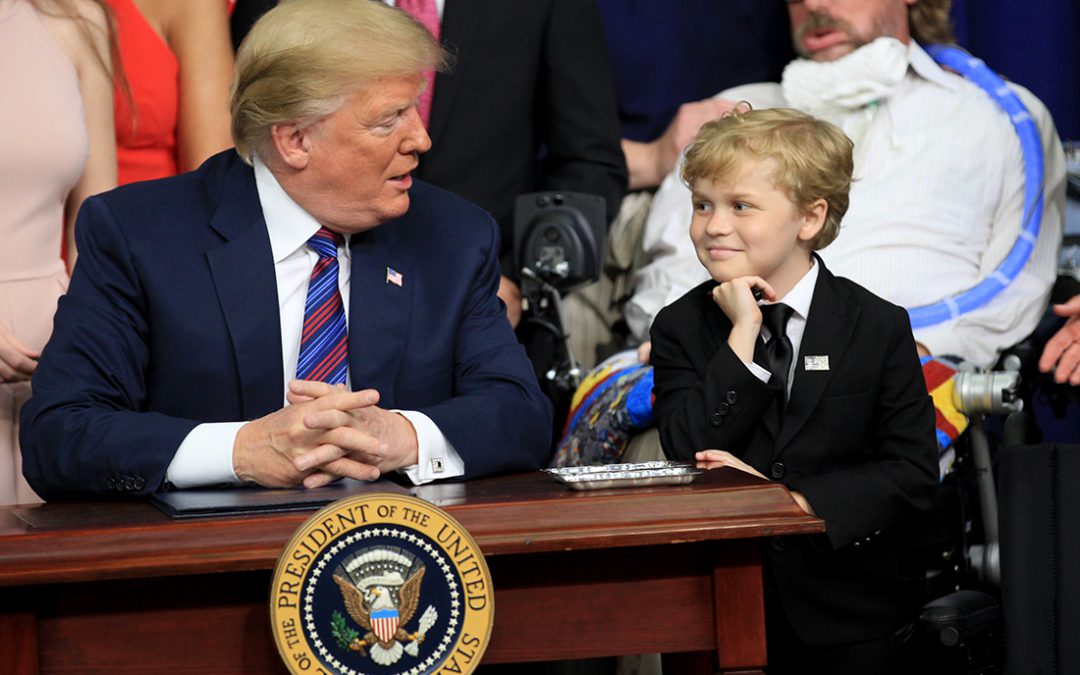 Jordan McLinn joins President Donald Trump on stage during the signing of the Right to Try bill on Wednesday. Photo by Elizabeth Beyer

WASHINGTON — President Donald Trump told 8-year-old Indianapolis native Jordan McLinn on Wednesday that he has the look of a president before signing a bill that McLinn and his family have championed to allow terminally ill people to receive experimental treatments. 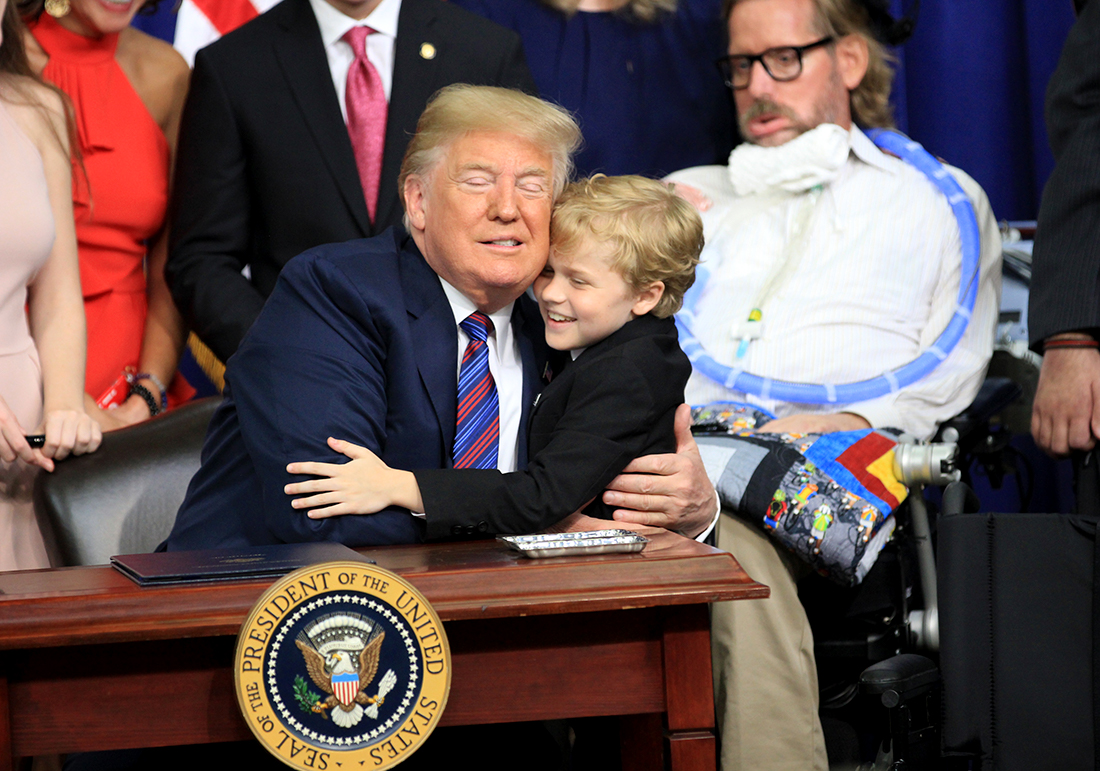 President Donald Trump hugs Jordan McLinn after signing the Right to Try bill which will allow terminally ill patients to have access to experimental treatments that have not yet been approved by the FDA. Photo by Elizabeth Beyer

Trump gave McLinn a pen, hug and kiss during the White House ceremony — but more important to McLinn was the bill Trump signed into law allowing terminally ill patients to use experimental medicines that have not yet been approved by the Food and Drug Administration after all other treatments have failed. The youngster has Duchenne muscular dystrophy, which weakens muscles and is fatal.

The act gives “new hope to vulnerable families all across America,” said Vice President Mike Pence before introducing the president.

Trump personally thanked Democrat Sen. Joe Donnelly for being the primary co-sponsor on the Right to Try legislation, during the bill signing Wednesday. 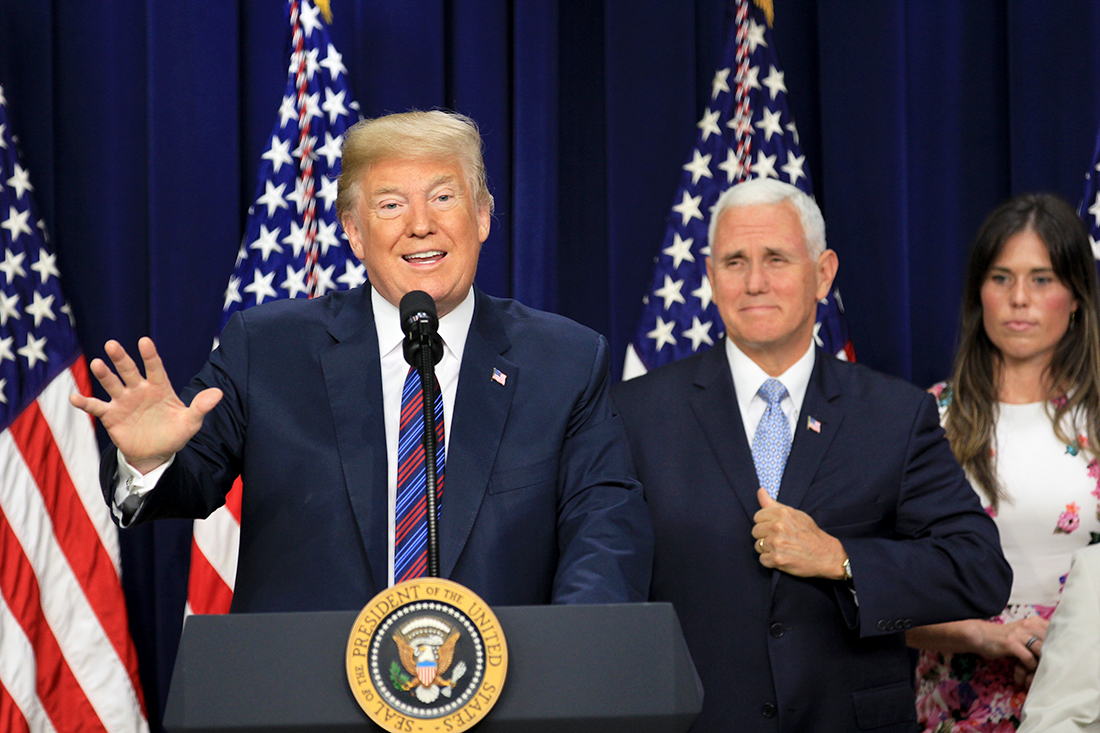 President Donald Trump thanked members of Congress, including Sen. Donnelly who he had previous referred to as “Sleeping Joe” and a “swamp person” before signing the bipartisan Right to Try bill which will allow terminally ill patients to have access to experimental treatments that have not yet been approved by the FDA. Photo by Elizabeth Beyer

That comment was an abrupt shift from his earlier criticisms of Donnelly, considered to be one of the most vulnerable Democrats in the Senate, as he runs for re-election for a seat in a red state that definitively voted for Trump in 2016. Earlier this month during a campaign rally in Elkhart, Ind., Trump attacked Donnelly for voting with the “radical left of Nancy Pelosi” and labeled him as ineffective.

Pence also praised Congress for working in a bipartisan manner.

“This is how Congress should work to advance the interests of the American people,” Pence said.

He also called McLinn one of his heroes.

“Three years ago, I met a young boy from Indiana who is one of my heroes,” Pence said.  “Jordan McLinn and his mom, Laura, helped us advance Right to Try in the Hoosier State.  And I can tell you, from even before Inauguration Day came, Jordan found us and was a champion for Right to Try on the national level.”

McLinn, in a black suit and tie, stood beside Trump as the president signed the bill. 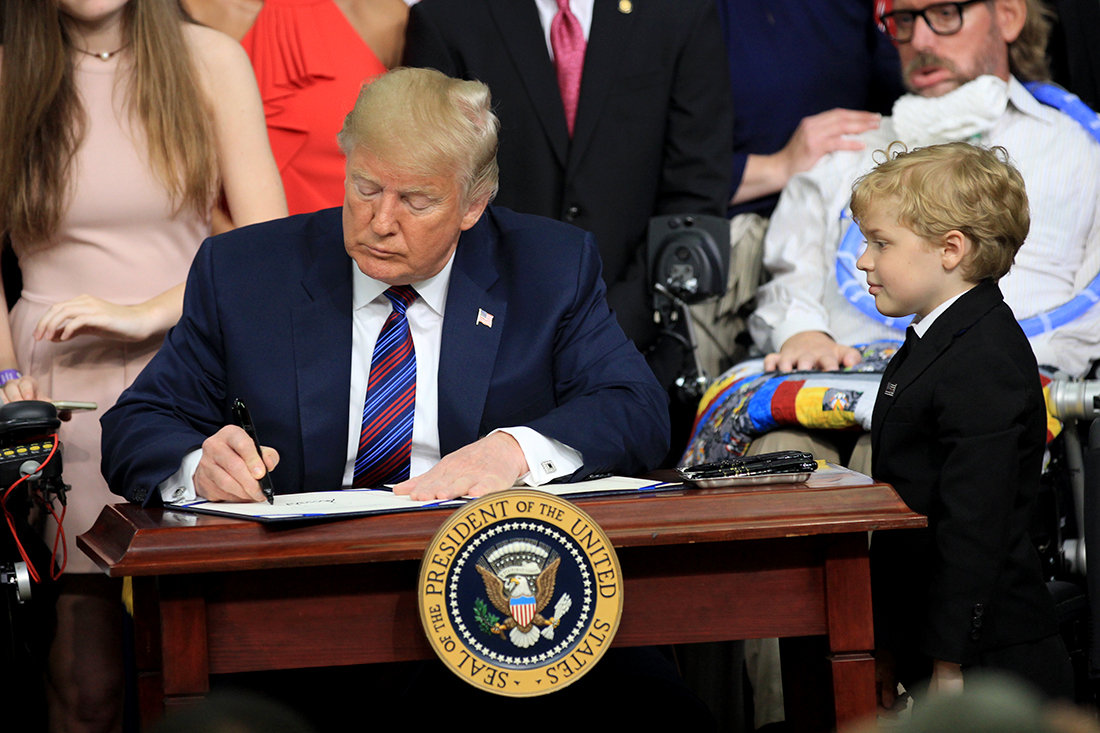 Jordan McLinn, an Indiana native who was diagnosed with duchenne muscular dystrophy stands beside the president as he signs the Right to Try bill which will allow terminally ill patients to have access to experimental treatments that have not yet been approved by the FDA. Photo by Elizabeth Beyer

Other supporters of the bill on stage included many who have amyotrophic lateral sclerosis, more commonly known as ALS, or have a family member suffering from the illness.

“You have extraordinary courage, determination and love. You have love. Real love. And thanks to you, countless American lives will ultimately be saved,” Trump said. 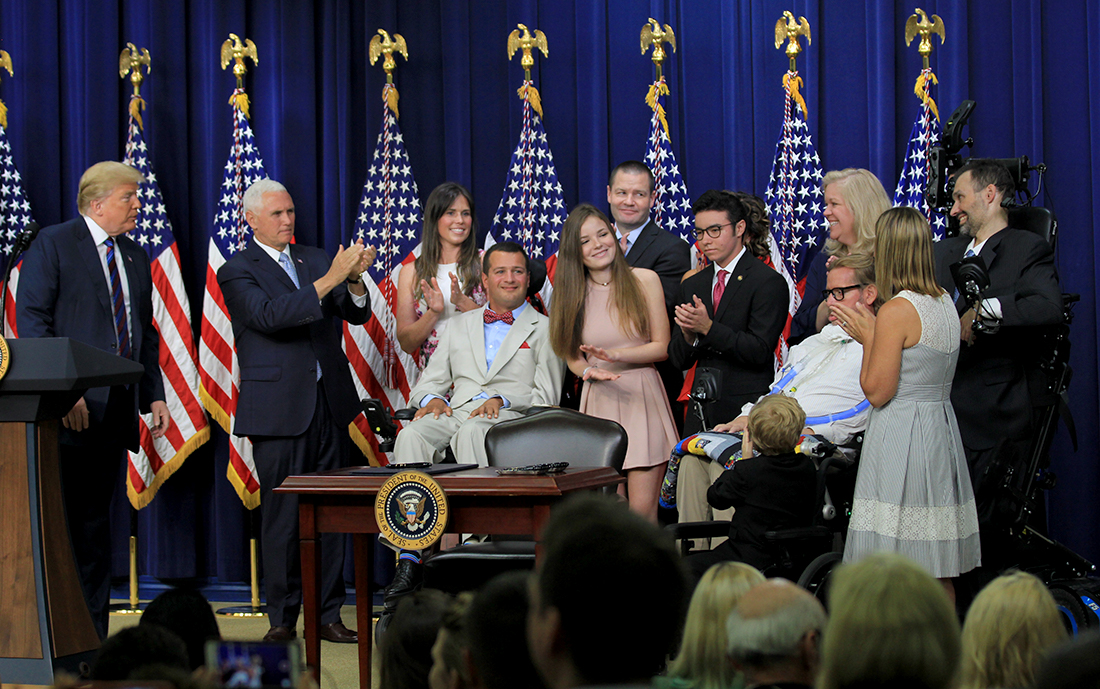 Supporters of the Right to Try bill joined the president on stage for the signing. Photo by Elizabeth Beyer

Patients will have access to “promising” experimental life-saving treatments that they couldn’t get before due to red tape by pharmaceutical and insurance companies as well as liability issues, Trump said.

More than 40 states, including Indiana, have passed measures that allow terminally ill patients to try experimental treatments that have not been approved by FDA. However, because the FDA is a federal agency, those measures have been blocked on a nationwide scale.

“We stand ready to implement this legislation in a way that achieves Congress’ intent to promote access and protect patients. The FDA is dedicated to achieving the goals that Congress set forth in this legislation, so that patients facing terminal conditions have an additional avenue to access promising investigational medicines,” the FDA said in a statement released Wednesday.