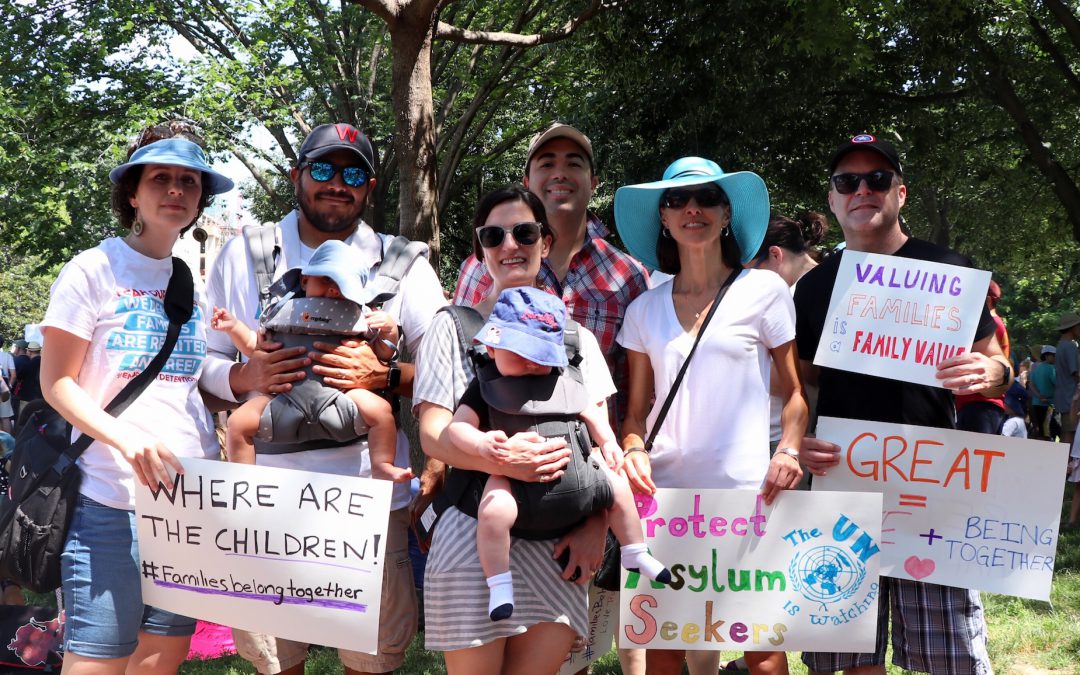 Latino community brought children with them to the "Family Belong Together" rally. (Xiaozhang (Shaw) Wan/Medill)

WASHINGTON – Despite temperatures that soared above 90, the “Families Belong Together” rally drew tens of thousands of people to Washington this weekend, including some not even old enough to carry a sign or shout a slogan.

The children and grown-ups gathered outside the White House — and in hundreds of other locations across the country — to decry President Donald Trump’s “zero tolerance” immigration policies that have separated families crossing the southern border.

“Latinos are getting affected and especially at the southern border. We really are speaking out for a lot of Latinos on this issue,” said Sara Le Brusq, vice president of Latino Victory Project, which aims to help elect candidates who will prioritize Latino values.

“We need better policies … What we are doing at the border is unAmerican and inhumane,” Le Brusq said.

A push to prosecute 100 percent of people illegally crossing the border starting in May led immigration officials to separate more than 2,000 children from their guardians and put them in shelters throughout the country. After bipartisan backlash for the separations, Trump signed an executive order June 20 to end the practice.

Still, some advocates questioned how those already separated would be reunited and spoke out against the administration’s new policy to detain children with their parents for longer than 20 days — which previously was the maximum amount of time a child could be in custody under the Flores agreement.

Many protesters came as families, carrying their children, pushing them in strollers or pulling them in carts. Le Brusq said she brought her 7-month-old son, Damian, to expose him to all the work that protesters were doing and turn him into a little activist.

“He is the best activist,” said Le Brusq.

“We want a world that’s better, that’s united, that’s inclusive,” Duran said. She said her parents came to the United States years ago so that she could enjoy the education and rights in America and wants to pass on that legacy to her kids.

“It’s important for our daughter to be with us, to show how important family unity is, for those kids that are now separated from their families,” Jorge said. “We go everywhere with our daughter, just like those families make the dangerous journey to give a better life to their daughter, to their sons.”

Elizabeth said she cannot imagine the pain some immigrant families were going through.

“We are here to tell the government that we do not support that policy. America is a country of immigrants and we should not be treating immigrants coming to this country like that,” she said.

Latino celebrities also lent their voices to the movement. Lin Manuel Miranda, write of the musical Hamilton, joined the Latino Victory Project protesters as they marched from the group’s office to the White House. He came to the rally because “our kids and our families are in the balance.”

Sen. Kisten Gillibrand, D-N.Y., who sat down with hundreds of women on Thursday’s protest against family separation and detention, delivered the same message to the Latino community.

“What’s happening at the borders is unconscionable. It’s a moral outrage,” she said.

She was also the first U.S. senator who called for abolishing the Immigration and Customs Enforcement agency.

A previous rally was organized by the Project two weeks ago in Texas to call for attention to separations at the border.

“Of course immigrants [are] coming to this country from all over the place. But this is of extreme importance to Latino families,” Le Brusq said.