The Washington Spirit at the Rooftop of the Audi Field. (Athena Liu/MNS)

WASHINGTON – Despite a dismal season and early elimination from the National Women’s Soccer League playoffs, the Washington Spirit hopes holding their last home game at the new D.C. United Audi Field will lure more fans to their sport.

The Washington team, whose home field is the Maryland SoccerPlex in the Washington suburb of Germantown, will host the defending NWSL champion Portland Thorns on Aug. 25 at D.C. United’s new field in southeast Washington. 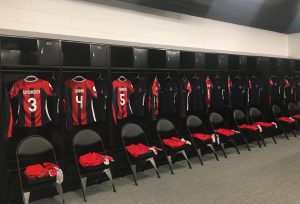 The Spirit will use the guest locker room for their Aug. 25 game at the Audi Field. (Athena Liu/MNS)

“I’m excited to have the opportunity to showcase these incredible athletes in D.C. at the stadium and start building our D.C. audience,” team owner Bill Lynch said Wednesday.

Audi Field’s capacity of 20,000 people is five times that of the Maryland SoccerPlex. The Spirit’s average home game attendance in 2017 was 3,550 with the highest 4,989 at the March 31 game against the Orlando Pride.

“It’s a testament to what this league can produce on the field,” said head coach Jim Gabarra.

According to Lynch, the long-term goal of arranging such games is to attract more fans and to grow women’s soccer. More events are expected next year. 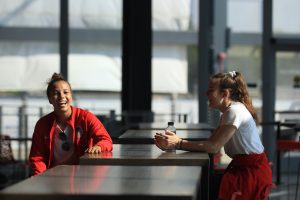 Gabarra said that if the Audi Field game does get increased attendance, “it will be the next step to consider how much further we go in 2019. I’m optimistic that we can play a couple of games here in 2019, whether it’s a doubleheader or stand-alone games like this match.”

The Spirit is 2-14-4 this season – only ahead of the winless Sky Blue.

Gabarra predicted the disappointing record, as well as the 0-1-1 season record against Portland, will not affect the attendance of the Aug. 25 game.

“I look at it more positively as an event. For our soccer market and for our city, this is a women’s soccer event and the first one at Audi Field,” he said. “That’s something you want to be at and, regardless of the result, to be able to see Mallory Pugh, Rose Lavelle, Lindsey Horan and Tobin Heath. The list goes on and on for world-class international players playing here in Washington D.C. It’s something you don’t want to miss.” 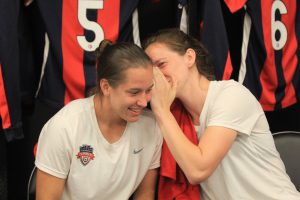 Spirit players having fun in the locker room. (Athena Liu/MNS)

The team is optimistic it can have a good showing against Portland.

“Getting to play in such a great stadium definitely ups the morale,” said midfielder Rose Lavelle.

Gabarra agreed, saying that the Thorns “bring out the best in us so I think it’s going to be a very good match, very competitive.”