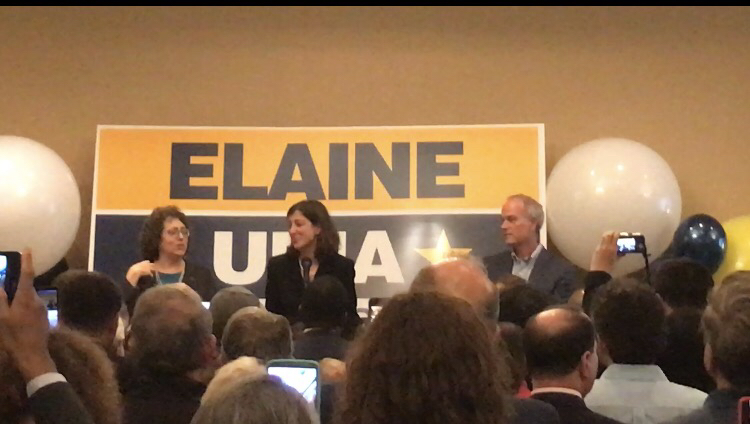 Luria’s supporters chanted “Yes, we did!” the moment NBC announced her victory Tuesday night at her campaign’s election party. Her tight win – 51 percent to 49 percent — was one of three in Virginia in which Democratic women ousted Republicans and helped several victories a part of the “blue wave” that will flip control of the House to Democrats.

“My door will be open, my phones will be on. And my job now is to work hard for all of my constituents, regardless of who they voted for on Election Day,” Luria said in her victory speech.

Virginia’s 2nd congressional district has been in Republican hands for the last two decades except for two years. It includes Virginia Beach, Norfolk’s north side and the Eastern Shore.

Many of Luria’s supporters used their votes to push back against Trump’s momentum.

“This is an anti-Trump decision,” said Roger Wulf, a resident of Virginia Beach. “I want Democrats to take the house or senate because I don’t like it when one party controls congress and presidency.”

Top issues during the campaign included the tariffs levied by the Trump administration against China and how they hurt local poultry and soy farmers. Military funding was also at the center of the campaign, particularly because Taylor and Luria are both former Navy SEALs.

Luria is a first-time political candidate and, like Amy McGrath in Kentucky’s 6th congressional district, highlighted her military experience to appeal to a traditionally Republican voter base. The tactic proved successful for Luria and unsuccessful for McGrath.

Taylor had a slight lead over Luria in most polls going into Election Day.

Taylor had promised to continue supporting Trump on key issues that have divided voters in the midterm elections. He opposed the Affordable Care Act, supported tariffs on China and voted in favor of the tax reform bill in 2017. He has, however, opposed the building of a wall on the U.S.-Mexico border, which may be a reason he was not endorsed by Trump during his campaign.