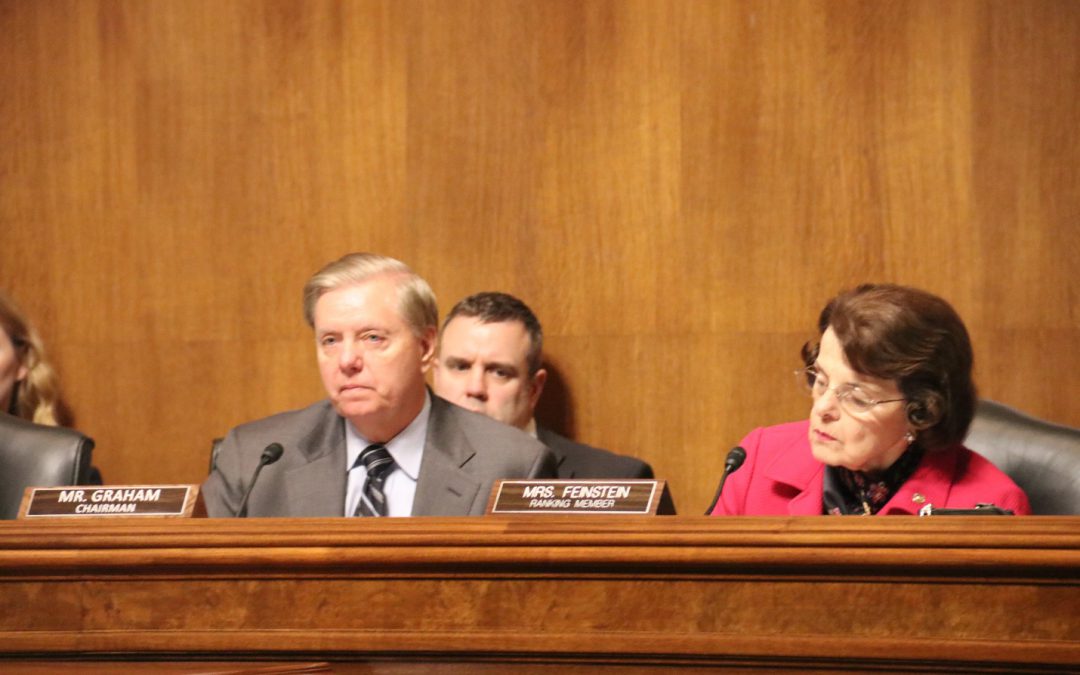 Chairman of the Senate Judiciary Committee Lindsey Graham, R-S.C., and Ranking Member Dianne Feinstein, D-Calif., expressed concerns about the installation of Huawei networks across the globe. Graham stressed the need for alternatives in 5G. (Dwight A. Weingarten/Medill)

WASHINGTON— Chinese company Huawei’s efforts to sell its 5G network equipment to U.S. allies raised concerns Tuesday among members of the Senate Judiciary Committee about disruptions in global communications, intelligence sharing and military operations if the Chinese-backed company is allowed to orchestrate the 5G global environment.

Committee Chairman Sen. Lindsey Graham said he had not seen “bipartisanship like this is a long time” over the national security implications of emerging 5G networks run by the Chinese company Huawei.

“If [Huawei] controls the network, they control whether or not we communicate,” said Christopher Krebs, director of the Cybersecurity and Infrastructure Security Agency at the Department of Homeland Security.

He said that a military mission overseas relying on a Huawei network could be shut down by its operators. Sen. Richard Blumenthal, D-Conn., agreed, saying aircraft carriers become “sitting ducks” if communication systems are vulnerable.

Instead of a backdoor in the networks that just Huawei or the Chinese could exploit, Krebs said, potential vulnerabilities in Huawei’s systems could be a “bug door” that any knowledgeable actor could exploit, leaving Huawei with plausible deniability of an attack.

5G networks, which Krebs described as “the internet of things,” have capabilities for autonomous vehicles, remote surgery and advanced manufacturing, but senators from both parties expressed concerns about Huawei dominating the global market for 5G because of the Chinese government’s ability to influence the company.

Krebs said for many ally nations the attractiveness of a Huawei network comes from an initial low-cost transition to 5G, but said a British oversight board’s report showed the total life cycle costs of maintaining a Huawei network will be higher.

The offer by the Chinese to sell the 5G equipment cheaply and operate, maintain and repair it is “putting a fox in the hen house,” said Sen. Thom Tillis, R-N.C.

Blumenthal said in Congress, there is “strong bipartisan alarm about the threat by posed by Huawei, which is really a threat posed by China.”

“What still mystifies me is why our partners and allies around the world seem less alarmed than we are?”

“We’re spending tens of billions of dollars on aircraft carriers, on new joint strike fighters, all of it potentially more vulnerable because of the kinds of compromising equipment you’re describing,” Blumenthal said. “We are literally putting our national security at risk and ultimately it’s theirs [our allies] as well.”

When representatives from the United States, the European Union and NATO countries met two weeks ago in Prague, the nations agreed on the principle of the rule of law when implementing 5G networks, said Ambassador Robert Strayer, deputy assistant secretary for cyber and international communications and information policy at the State Department.

“Our ability to be leaders on the global stage depends on our ability to command the intellectual property rights of 5G,” said Sen. Chris Coons, D-Del., who recently returned from leading a congressional delegation to China. “How do we set standards in a way that allows free and open principles for 5G to win out?”

“China’s goal is to build the entire house,” said Coons. “We need to step up our game to make sure we’re part of the framing of the next generation.”