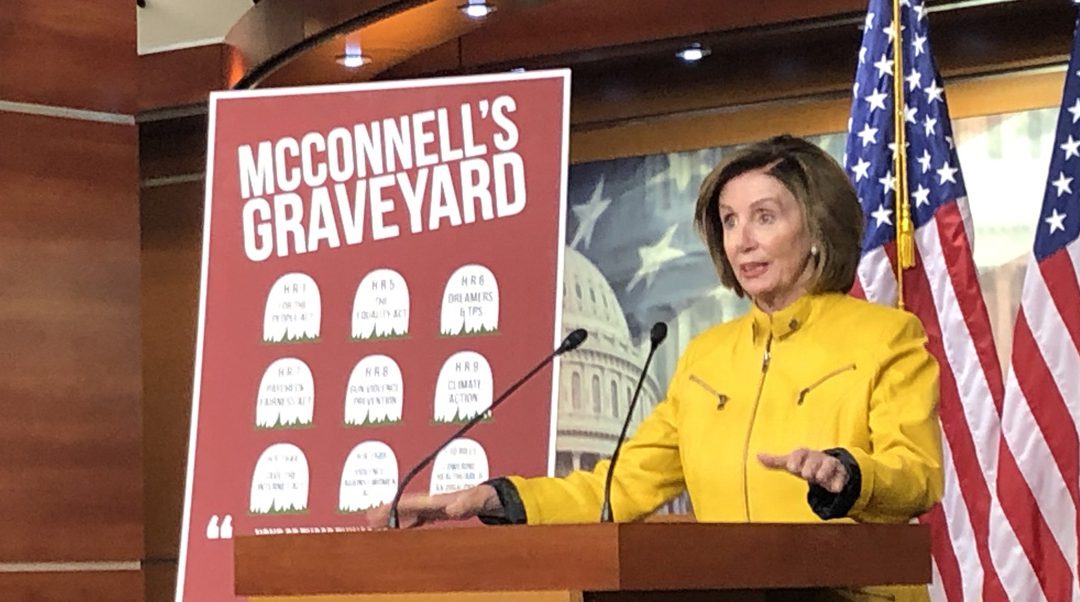 Nancy Pelosi speaks during a press conference at the Capitol Thursday. In addition to criticizing Senate Majority Leader Mitch McConnell’s reluctance to bring House bills to the floor of the Senate, Pelosi also condemned the president’s recent remarks. (Dwight A. Weingarten/MEDILL)

WASHINGTON — After the president said he would not necessarily tell the FBI if a foreign adversary contacted his campaign during the upcoming election, House Speaker Nancy Pelosi responded Thursday by saying, “Follow the money.”

While House Minority Leader Kevin McCarthy said he would send any information he received from a foreign country to the authorities, he was reticent to condemn the president’s comments.

“The president has gone through this [Mueller investigation] and acted properly all along the way,” said McCarthy.

Pelosi saw it differently: “Everybody in the country should be totally appalled by what the president said last night.” In an interview with ABC aired Wednesday night, Trump said he would take information from foreign governments about political opponents during a campaign and would not necessarily tell the FBI about the contact.

The House speaker said she believes the president has no “ethical sense,” but his comments will not trigger an impeachment inquiry.

Advocating for a methodical approach to investigating the president, Pelosi said, “As we go down this path to seek the truth for the American people and hold the president accountable, it has nothing to do with politics.

“It has everything to do with patriotism, not partisanship,” she said.

Pelosi said the president’s deals with Saudi Arabia, including weapons sales and perhaps transferring nuclear technology, led her to believe that President Donald Trump’s decisions are often based on his business dealings with other countries.

“I think it’s all about money,” said Pelosi, “Connect the dots in all this.”

Currently, it is illegal to accept information from a foreign source during a campaign, but there is no legal duty to report the contacts.

Pelosi said a package of legislation, which includes a provision to make it mandatory to report foreign offers of assistance to campaigns, will be introduced to Congress and provide clarity on the issue.

She also questioned the loyalties of Republicans in Congress.

“How much more can they bear of the president’s unethical behavior that they think they are honoring their oath of office?” she asked.