Trump remarks after El Paso, Dayton shootings: ‘Hate Has No Place In America’ 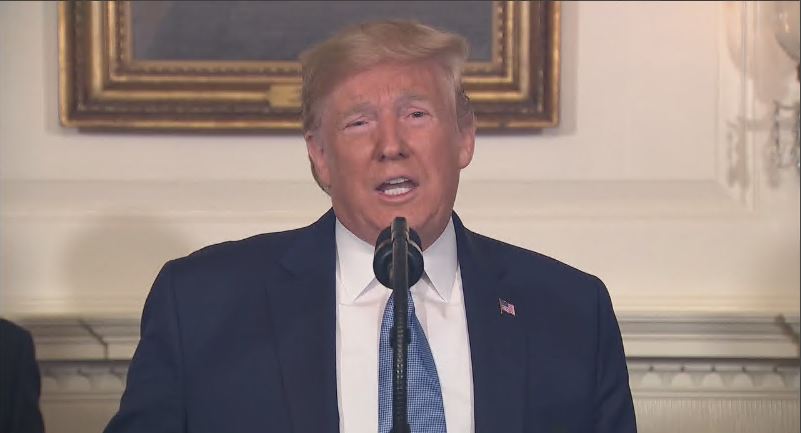 President Trump delivers a speech from the Diplomatic Reception Room of the White House Monday in the wake of two mass shootings in El Paso, Texas, and Dayton, Ohio, over the weekend.

WASHINGTON — In his first formal remarks after mass shootings in El Paso, Texas, and Dayton, Ohio, in which 31 people were killed, President Donald Trump on Monday urged the nation to come together in “one voice” to “condemn racism, bigotry and white supremacy.”

“These sinister ideologies must be defeated,” he said in a live address from the White House, “Hate has no place in America.”

The president called for “real bipartisan solutions” to gun violence, voicing his support for “red flag” laws to keep guns out of the hands of potentially dangerous people. He said the Justice Department would propose legislation for those who commit hate crimes and mass murders to face the death penalty “quickly” and “decisively.”

“It is too easy today for troubled youth to surround themselves with a culture that celebrates violence,” he said calling for an end to the “glorification of violence” in American society – specifically mentioning “gruesome video games.”

“Mental illness and hatred pulls the trigger, not the gun,” the president said voicing his support for mental health law reform, calling for better identification and treatment of mentally disturbed individuals.

The president misstated the location of one of the two mass shootings near the end of his remarks saying, “May God bless the memory of those who perished in Toledo,” instead of Dayton, where a gunman opened fire in a nightlife district Sunday. He read his speech from a TelePrompTer, and it is unclear how the mistake occurred.

“Our future is in our control,” the president said, “America will rise to the challenge, we always have, and we always will win. The choice is ours and ours alone. It is not up to mentally ill monsters; it is up to us. If we are able to pass great legislation, after all of these years we will ensure that those who were attacked will not have died in vain,” he said.

In response to his speech, House Speaker Nancy Pelosi and Senate Minority Leader Chuck Schumer called for the Senate to return from its August recess “immediately” to pass the Bipartisan Background Checks Act of 2019, which would establish new background check requirements for firearm sales. The House already has passed the bill.

“Senate Republican Leader Mitch McConnell has called himself the ‘grim reaper’ and refuses to act on this bipartisan legislation,” Pelosi and Schumer said in a joint statement.

McConnell, who fractured his shoulder in a fall at his Kentucky home over the weekend, said Monday evening that “Senate Republicans are prepared to do our part.” McConnell said he is encouraging Republicans “to engage in bipartisan discussions of potential solutions to help protect our communities without infringing on Americans’ constitutional rights.”

Both Trump and McConnell pointed to the bipartisan cooperation that led to the passage of legislation that provides grants to state and local governments to improve security at schools and a law that ensures federal and state authorities accurately report criminal history records to the National Instant Criminal Background Check System.

Texas Republican Sen. John Cornyn was one of the senators who introduced the records law following a mass shooting at a Baptist church in Sutherland Springs, Texas, in 2017 – reportedly the deadliest mass shooting in Texas history.

Cornyn, who was in El Paso over the weekend, supported McConnell on Twitter Monday.

“For every complex problem there is an answer that is clear, simple, and wrong. Sadly, there are some issues, like homelessness and these shootings, where we simply don’t have all the answers,” Cornyn said.

“We should soundly reject language coming out of the mouths of any of our leaders that feeds a climate of fear and hatred or normalizes racist sentiments; leaders who demonize those who don’t look like us, or suggest that other people, including immigrants, threaten our way of life, or refer to other people as subhuman or imply that America belongs to just one certain type of people,” Obama said.

“We are not helpless here. And until all of us stand up and insist on holding public officials accountable for changing our gun laws, these tragedies will keep happening,” the former president said.

In the morning before his remarks, Trump suggested coupling stronger background checks with immigration reform.

“Republicans and Democrats must come together and get strong background checks, perhaps marrying this legislation with desperately needed immigration reform. We must have something good, if not GREAT, come out of these two tragic events!” he tweeted.

“Tying background checks to immigration reform is a transparent play to do nothing,” he tweeted in response to the president’s tweet. “There is no need to do them together. Background checks has already passed the House – w Republican votes. If Trump asked McConnell to support it, it would pass in a week. FYI – he won’t do that.”