Activists tell 2020 candidates what issues matter most: ‘We have to take care of our collective house’ 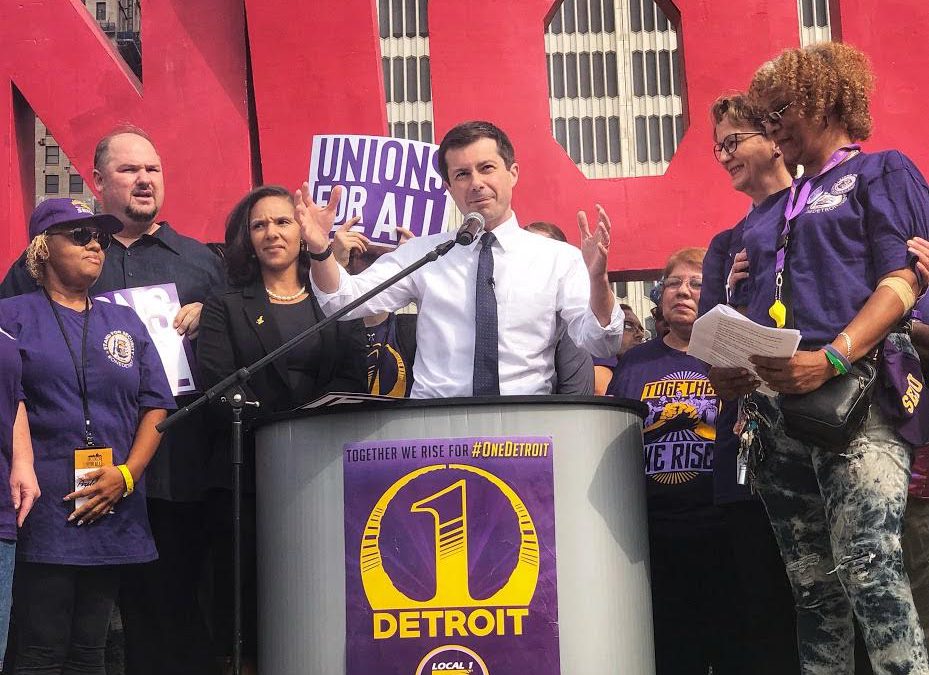 7/31/19 – “What does it say about us that the GDP is going up and the life expectancy in this country is going down?” said South Bend, Indiana, Mayor Pete Buttigieg, a Democratic presidential candidate. Buttigieg joined Service Employees International Union Wednesday for a rally in Hart Plaza supporting union workers. (Ariana Puzzo/MEDILL)

DETROIT – Activists protested, chanted, got arrested and otherwise tried to draw attention to issues last week that will determine who they support in the 2020 presidential election – issues ranging from climate change, health care for veterans and anti-abortion laws.

Many arrived in Detroit ahead of the two-night Democratic debates at the Fox Theatre downtown, and they were involved in rallies and actions during the day.

“I really believe that we are at a critical time where if we don’t mobilize, history will repeat itself,” said Lisa, 43, representing the Industrial Workers of the World’s General Defense Committee. Lisa, who preferred not to give her last name, attended a Wednesday rally supporting immigrant rights.

7/30/19 – The CNN Democratic Debates were held at the Fox Theatre Tuesday and Wednesday nights. Twenty candidates qualified to participate in the debates and were split into 10 candidates on stage each night. (Ariana Puzzo/MEDILL)

7/30/19 – “On my new bumper sticker I’ll have in Houston, it says, ‘Trumper’ and then it says, ‘Adjective/noun’ and then it says, ‘It’s a person who voted for Trump who’s stupid enough to vote for him again,'” said Michael McCord, 64, Richmond, Virginia, resident. McCord said that although President Donald Trump’s supporters get angry when they see his stickers, he receives positive feedback from those who “support this philosophy.” McCord says as a disabled veteran, health care for veterans is a crucial issue for him. He has not decided who he supports in the 2020 presidential election. “I believe in the democratic process, so I’m giving them all open view,” McCord said. “When we get down to … the finals, I’ll make my decision then. But it won’t be Trump.” (Ariana Puzzo/MEDILL)

7/30/19 – “I’m a firm believer of humanity, human rights, and that life starts at conception and that only God can give life or take life,” said James, 45, a Livingston County resident. James, who calls himself a born-again Christian, was on the streets Tuesday speaking against abortion. He was also critical of Democrats and “the powers that be” because he said that they have “hidden agendas and are exploiting people in a lot of different ways.” James said he has not watched television since 2011 and does not read newspapers. “[I get my information from] YouTube, and I really don’t care. I just raise my kids, go to Church, love the Lord,” James said. (Ariana Puzzo/MEDILL)

7/30/19 – “We have to take care of our collective house,” said 61-year-old Detroit resident Susan, who also declined to provide her last name. She attended the “Make Detroit the Engine of the Green New Deal!” rally Tuesday at Cass Park. Since she will become a great-grandmother in November, she worries that future generations will suffer because of climate change and intends to talk about these issues with her grandchildren as they get older. (Ariana Puzzo/MEDILL)

7/30/19 – Oak Park resident Lucinda Keils, 68, said that she still has Sen. Bernie Sanders stickers on her car from the 2016 presidential election. Keils and her niece attended the “Green New Deal” rally Tuesday at Cass Park, and Keils said that although she supports Sanders, she hopes the eventual Democratic nominee defeats Trump in 2020. “If [Trump] gets four more years, we’re totally screwed,” Keils said. (Ariana Puzzo/MEDILL)

7/30/19 – “The impeachment of Donald Trump should have started by now,” said Nicole Conaway, 42, an organizer with The Coalition to Defend Affirmative Action, Integration & Immigrant Rights, and Fight for Equality By Any Means Necessary. Conaway attended the “Green New Deal” rally Tuesday at Cass Park. She said that House Speaker Nancy Pelosi is protecting Trump by not moving forward with impeachment. “Acting like it’s ‘business as usual’ and we can wait for an election is dangerous,” Conaway said. BAMN is an organization that works to defend civil rights, including affirmative action and integration. (Ariana Puzzo/MEDILL)

7/30/19 – “This is their future. Everything we do is to make for a better world for them, for their children,” said Carolyn Leadley, a Poletown East resident. Leadley and Jack Vandyke attended the “Green New Deal” rally Tuesday at Cass Park with their young children. Leadley said that she and Vandyke are trying to ensure that understanding environmental action and climate change are included in their children’s education. (Ariana Puzzo/MEDILL)

7/30/19 – Linda Gray, 65, Norwich, Vermont, attended the “Green New Deal” rally Tuesday at Cass Park. She is concerned about the “climate crisis” and said that achieving change requires making sure more people are aware of the crisis. The rally was organized by local groups, including Frontline Detroit Coalition, the Greater Detroit Democratic Socialists of America, and SEIU Local 1. (Ariana Puzzo/MEDILL)

7/30/19 – “Our committee can affect 50 households at a time; we need to affect millions,” Gray said. The sign pictured was brought by Gray to an NYC rally in 2014 and a Washington rally in 2017. Gray said that she hopes she will not need to continue bringing it to more rallies. (Ariana Puzzo/MEDILL)

7/30/19 – “It’s our future, it’s our fight, water is a human right,” protestors chant. Supporters of the Green New Deal marched from Cass Park to the Fox Theatre Tuesday to bring attention to their fight for clean energy, local union jobs and a “livable future for Detroit and all frontline communities.” Organizers stated that they wanted to utilize the focus on the city while 2020 presidential candidates visited for the debates. The first debate was Tuesday night at the Fox Theatre. (Ariana Puzzo/MEDILL)

7/30/19 – “Donald Trump’s been pretty good to us … If I vote for any Democrat, I’m not just voting for that person, I’m voting for the agenda of that party,” said Al Lemmo, 66. Lemmo, an anti-abortion activist with Right to Life-Lifespan, was among activists talking with passersby about these signs Tuesday during the first night of the Democratic debates. (Ariana Puzzo/MEDILL)

7/31/19 – “What does it say about us that the GDP is going up and the life expectancy in this country is going down?” said South Bend, Indiana, Mayor Pete Buttigieg, a Democratic presidential candidate. Buttigieg participated in the first Democratic debate Tuesday night, and he joined Service Employees International Union Wednesday for a rally in Hart Plaza supporting union workers. “You should not have to fight for a union and $15, but as long as you do, we are in that fight with you, and I am proud to be at your side,” Buttigieg said. (Ariana Puzzo/MEDILL)

7/31/19 – “I really believe that we are at a critical time where if we don’t mobilize, history will repeat itself,” said Lisa, 43, representing the Industrial Workers of the World’s General Defense Committee. Lisa said that she is not a Democrat, but she will vote for one as “damage control” while she continues to work for a “more just system.” (Ariana Puzzo/MEDILL)

7/31/19 – “What are these people protesting?” asked Roberto Garcia, 51, Macomb County resident. “Nobody has the right to come to the United States. We need to respect the laws of different countries.” Garcia left Mexico for the United States 25 years ago. Garcia said that the United States needs to “close the loopholes” that allow undocumented immigrants to enter the country. (Ariana Puzzo/MEDILL)

7/31/19 – Protestors block the Detroit-Windsor international tunnel during a Wednesday rally called “Debate Take Over: Immigrants Deserve Dignity.” The action was ahead of the second Democratic presidential debate and resulted in the Detroit police arresting 21 people. Some passing drivers honked in what appeared to be signs of solidarity with the protestors’ fight for immigrant rights. (Ariana Puzzo/MEDILL)

7/31/19 – “We shall not, we shall not be moved,” protestors chant before the Detroit police arrest them. One of the final protestors in the street was taken into custody by the police Wednesday and received applause from other protestors who continued chanting on the sidewalks. Those who were not arrested returned to Hart Plaza. (Ariana Puzzo/MEDILL)