One on One: Presidential Candidate John Delaney talks to Medill 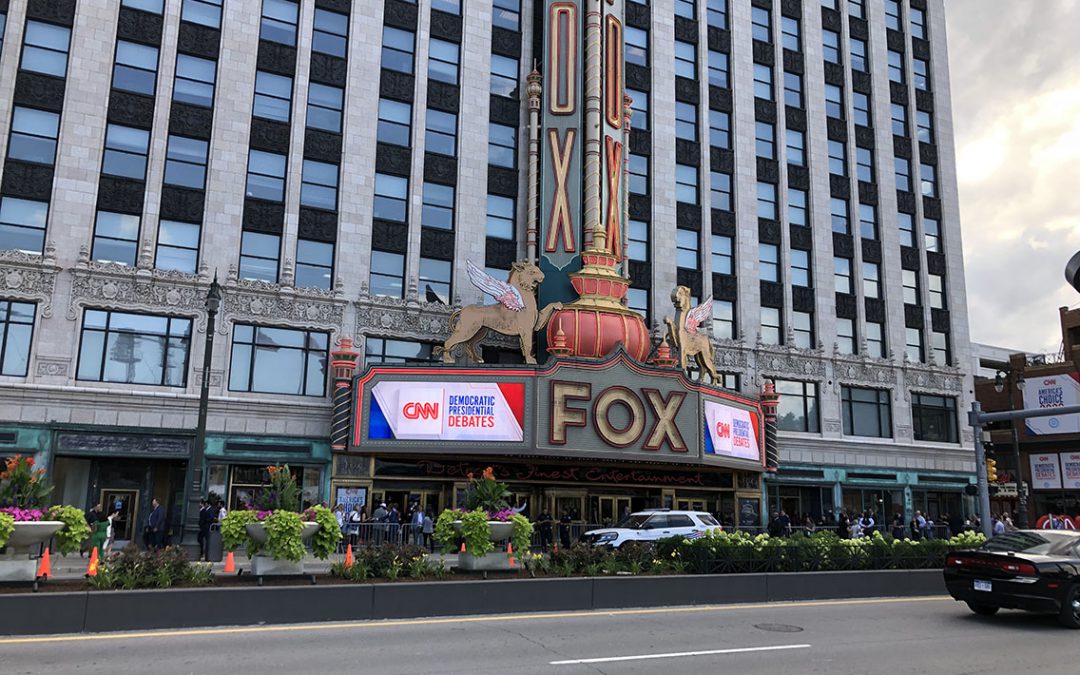 The Fox Theatre in Detroit, Michigan is the site of the second round of Democratic Presidential Debates on July 30 and 31, 2019. (Noah Broder/Medill News Service)

DETROIT– Prior to his appearance during the first night of the Democratic Presidential Debates in Detroit in late July, former Maryland Rep. John Delaney spoke to Medill about his strategy for the debates and the messages he hoped to get across.

During the debate, Delaney positioned himself against more progressive candidates like Massachusetts Sen. Elizabeth Warren and Vermont Sen. Bernie Sanders (D-VT). During the debate, he echoed his belief that ideas like Medicare-for-all without a private option are “impossible promises” that will doom the Democratic Party.

Here is what he had to say when we spoke to him just hours before his debate appearance on July 30. (Some questions and responses edited for clarity):

Medill: Is there anybody on stage you are trying to draw a distinct contrast or try to kind of align with?

Delaney: I mean I think there’s obviously people on this stage, things like Medicare for all, we’ve got Senator Sanders and Senator Warren and a few others who are all in on that and I think it’s a terrible idea. So yeah there are some real contrasts. These people are running on impossible promises, not real solutions.

Medill: So what’s your plan to try to lay out those things are maybe impossible and that your ideas are maybe a little more feasible?

Delaney: When you talk about making private insurance illegal, I think it becomes pretty obvious to most Americans that is actually never going to happen. When we talk about writing off all of the student loans, I think it’s pretty obvious to most Americans that’s never going to happen. And what about people who just paid off their loans. They’re going to feel like fools, they’re never going to support that. People with kids about to go to college who suddenly have to borrow money but the folks before them got all their loans written off. There’ll be stories about wealthy kids who got their loans written off. That’ll infuriate people. That’s never gonna happen.

Medill: Do you think it’s important at this debate to stay focused on pushing your agenda forward?

Delaney: Yes that’s always gotta be what you’re gonna do.

Medill: Are you going to try to bring up Trump?

Delaney: Well I think you can’t help but bring up Trump I mean he’s the sitting incumbent that we have to defeat. And he’s been engaged in some pretty horrific behavior recently. So I expect that to come up

Medill: Are you content that the debate field is still this large? Or are you looking forward to it getting smaller?

Delaney: I think It’ll be better for me when it gets smaller. Now you’ve got 4-5 candidate kind of hogging up all the votes because they’re particularly well known. And the rest of us are fighting over a relatively small pool and as that pool gets smaller I think it’s better.

Medill: Are you concerned you might not be on the stage for the next one?

Medill: Do you have any plans if you’re not on the stage?

Delaney: It doesn’t change my view of the race.

Medill: Going forward is there anything you’d like to see out of the candidates who are polling lower either endorsing someone else or running for Senate, or something like that? Or is it too early to think about that?

Delaney: So many people are preoccupied with what people should do with themselves, people telling different people to run for Senate. My advice is everyone makes their own decisions. And those people should work on what they can control and make a difference in their own lives in terms of how they can help the party or help the country. And not be so preoccupied with telling other people what they should or shouldn’t run for. In many ways, it’s become kind of what’s wrong with politics. It’s become like a game.

Delaney: Yeah it’s like ridiculous. I mean if John Hickenlooper wants to run for president as opposed to Senate, that’s his decisions he’s a free human being he can do whatever he wants. And all this preoccupation with it I think is ridiculous. I think you should find what you can do to make a difference and stop worrying about what different people should do.

Medill: Do you think it’s important to think about it from a party perspective of what’s better for the party? Is it better to have 20 voices or to have five or six?

Delaney: My sense is, the party that has had the biggest primary field generally wins. That’s what happened last time. We had a small handful of people and they had a huge field. And they won. I think a lot of people who are self-interested in the field shrinking like to say that it’s a problem. The problem is that they have no data to support that. In fact, the data is the other way. Big fields generally have produced winners. And when you do kind of what I think the DNC is trying to do, which is to create these strange rules like 130,000 donors. You start putting your thumb on the scale, you actually end up with outcomes that don’t actually put forth the best candidate.

Medill: So you would prefer just everyone who’s declared be on stage or it needs to be some sort of arbitrary…?

Delaney: It needs to be something. I think they should do it the way they’ve always done it. With polling. Not with donors. Where’d that come from?

Medill: So you think that’s just trying to narrow it down kind of just some criteria that they’ve selected?

Delaney: I think it’s their decisions to basically try to satisfy activists in the party. And therefore they’ll put up a candidate that is more oriented toward the activist. And I worry that that person will have challenges in the general election

Medill: Do you think these debates, when you’re speaking are you trying to speak to the Democratic voter or just to all Americans?

Delaney: I think you kind of do both. You have to know that you should never change what you are running on. Whether you are talking to Democrats or to the general population. Now you emphasize different things. When you’re running in a Democratic field you talk about how you can beat the president better than the other person can. When you’re running in a general election, you just talk about why you are the best candidate. Stuff like that, that changes. But in general, your policies shouldn’t change. And that’s the problem that some of these people are going to have. They ran on making private insurance illegal because they thought that was good in the Democratic primary. Come general election, that’s gonna be a disaster for them.

Medill: Is that something you’re going to try to bring up? The electability nationwide of some of those policies?

Delaney: Yeah I think so. I think it’s a good thing to talk about.

Medill: Thank you for taking the time