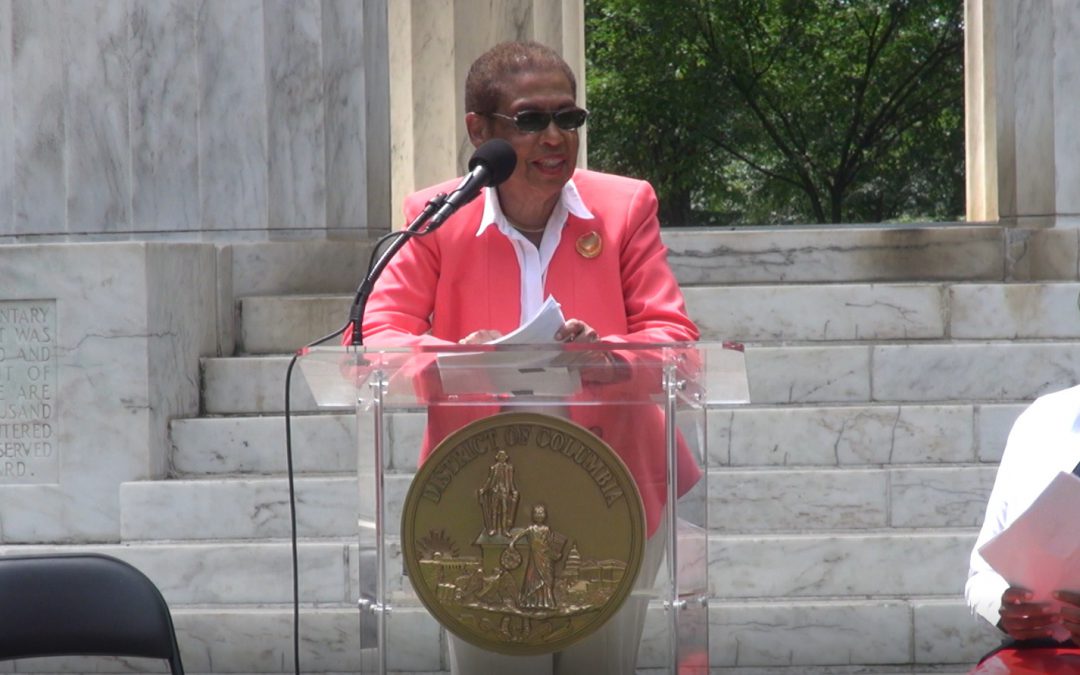 Congresswoman Eleanor Holmes Norton announces a House hearing for a D.C. statehood bill. D.C. Mayor Muriel Bowser looks on at the announcement event held May 30 at the D.C. War Memorial. (Dwight A. Weingarten/Medill)

WASHINGTON — Next month, for the first time in over 25 years, a proposal to make Washington the 51st state will have a hearing in the House of Representatives.

For third-generation Washingtonian and 28-year member of Congress Eleanor Holmes Norton, the issue of statehood has been a central focus of her political life.

“You have within the United States what you do not have of any nation’s capital in the world,” said Holmes Norton. “People who live in the nation’s capital are disempowered compared to the residents elsewhere in the country.”

“D.C. statehood is essential because though our residents pay the highest federal taxes per capita in the United States, they do not have fair and equal representation in the Congress of the United States,” said the lifelong Democrat, who has served as the district’s delegate in Congress since 1991. As a delegate rather than a representative, she cannot vote on final legislation on the House floor. 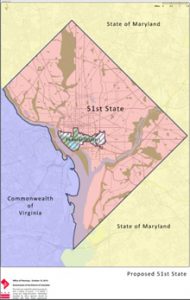 With a federal district written into Article I, Section 8 of the Constitution, the proposed H.R. 51 shrinks the size of the Federal District. The size of the district last changed in 1846 when Virginia reacquired the territory west of the Potomac River before the Civil War. (Map Courtesy of D.C. Mayor’s Office)

H.R. 51, the latest version, shrinks the boundaries of the federal district required by the Constitution to the small area of Washington running roughly from the White House and State Department to the Capitol. The rest of the city then would become the 51st state.

The House Oversight and Reform Committee is scheduled to have a hearing on the bill on Sept. 19, a process Norton thinks will lead to a House vote.

“I’m coming on to the second time I’ve introduced and getting a vote on D.C. Statehood,” she said July 31, a week after the original hearing date was pushed back to accommodate the testimony of former special counsel Robert Mueller.

Currently Washington, as a federal district, has no voting representation in Congress, and Congress can overturn bills passed by the D.C. City Council.

The city’s government “is in a state of resistance until we become a state,” said Holmes Norton.

She has witnessed the district’s transition from a system in which the president appointed the mayor and other city officials to Home Rule, a law passed by Congress in 1973 to create a system of an elected mayor and City Council members.

“It took many decades,” said Holmes Norton, of the fight to get Home Rule.

“They’re the ones that brought us Home Rule,” said Holmes Norton, pointing to photographs of district residents protesting during the fight for Home Rule that hang in her Capitol Hill office. “D.C. freed itself.”