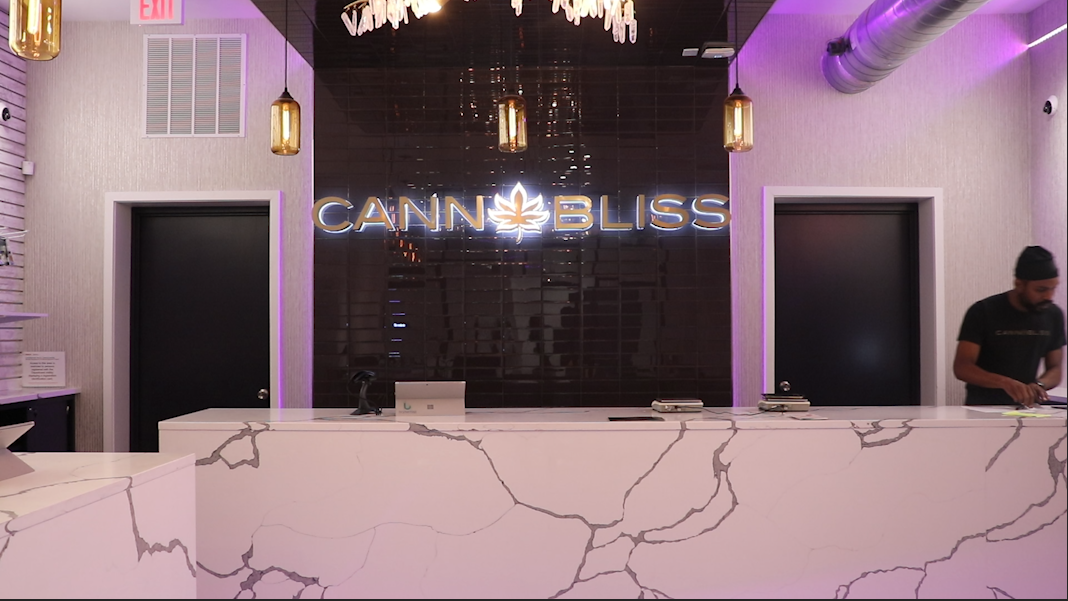 WASHINGTON — A new medicinal medical marijuana dispensary, housed in a pale yellow brick building with purple doors, was originally viewed with skepticism by residents of the largely black neighborhood east of the Anacostia River, but the owner hopes to prove that the store will give an economic boost to the community.

Cannabliss is the seventh dispensary in the District of Columbia and only the second to open east of the Anacostia River in two City Council wards – 7 and 8 — that are at least 90 percent black.

Washington has more than 6,700 registered medical cannabis patients; almost 20 percent live in Wards 7 and 8. Nobert Pickett, the 50-year-old founder of Cannabliss, wanted to give an economic boost to the community while solving the problem of access to affordable cannabis.

“This is a part of the city that’s been untapped from a patient standpoint. So our job here has been educating the patient and the community about what we do and about cannabis,” said Pickett.

Although medical marijuana has been legal in D.C. since 1998, the first cannabis dispensary opened in the district five years ago. In 2017, Councilmember Robert C. White Jr. sponsored a bill that gave preference to minority-owned companies in granting licenses to operate medical marijuana businesses. This came at a time when the district opened the number of licenses from five to award two permits in Ward 7 and 8.

“I want to be able to provide jobs and opportunity for people of color,” he said. “And women who have been neglected and (who do) not have enough given an opportunity to work in this industry. Because what happened was they were locking African American men and women up for a long time for cannabis.”

A thriving cannabis industry can boost ancillary businesses and create a safer neighborhood because of the Department of Health’s strict security requirements for cannabis facilities, according to Morgan Fox, a representative from National Cannabis Industry Association. Fox said that the community had concerns about the opening due to stigma associated with the industry but later came around.

“These businesses tend to be associated with a decrease in crime in the area surrounding them,” Fox said. “Beyond jobs and increased foot traffic in the community, they have increased the quality of life by providing patients with quality-controlled medicine and helping to displace the illicit market.”

Pickett was injured in a car accident in 2012 while living in Los Angeles, where he was vice president of Hi Point Studios after having been a casting director for Jimmy Kimmel Live.  He’s had 18 procedures and five major surgeries since then. “I know I look fine on the outside, but I’m an absolute mess on the inside,” he said.

Pickett started taking opioids to manage chronic pain caused by severe nerve damage. At one point, he was consuming five different types at a time. “I didn’t feel right feeling like a zombie every day and feeling all drugged up.” His search for alternatives led him to cannabidiol, commonly known as CBD.

“I found some benefit from that, you know, I didn’t find all the heavy side effects on my liver or bowel movements or anything like that when you get the heavy narcotics. And I wasn’t hungover the next day.”

When he moved to D.C. in 2016, Pickett noticed the high prices of medicinal cannabis. So when his physical therapist told him about a medical cannabis dispensary license that was available for Ward 7 and 8, he applied.

“The price of cannabis … is actually 20 percent higher here in the district than it is in the rest of the country, which isn’t right,” Pickett said.

A recent study by researchers at the University of Mexico cautioned that “cannabis use does carry the risk of addiction and short-term impairment in cognitive and behavioral functioning,” according to Pain News Network.

Darryl Hardy, 44, who is a printing specialist for the Department of Agriculture suffered multiple gunshot wounds when he was 16 and has since been in a wheelchair. He started consuming cannabis to relieve chronic pain and muscle spasm.

“I am coming here to avoid opioids,” says Hardy, who lives in the Navy Yard just across the Anacostia River from Wards 7 and 8 and was referred to the store by his doctor. “It’s (Cannabliss) is the best thing that’s ever happened to D.C.”