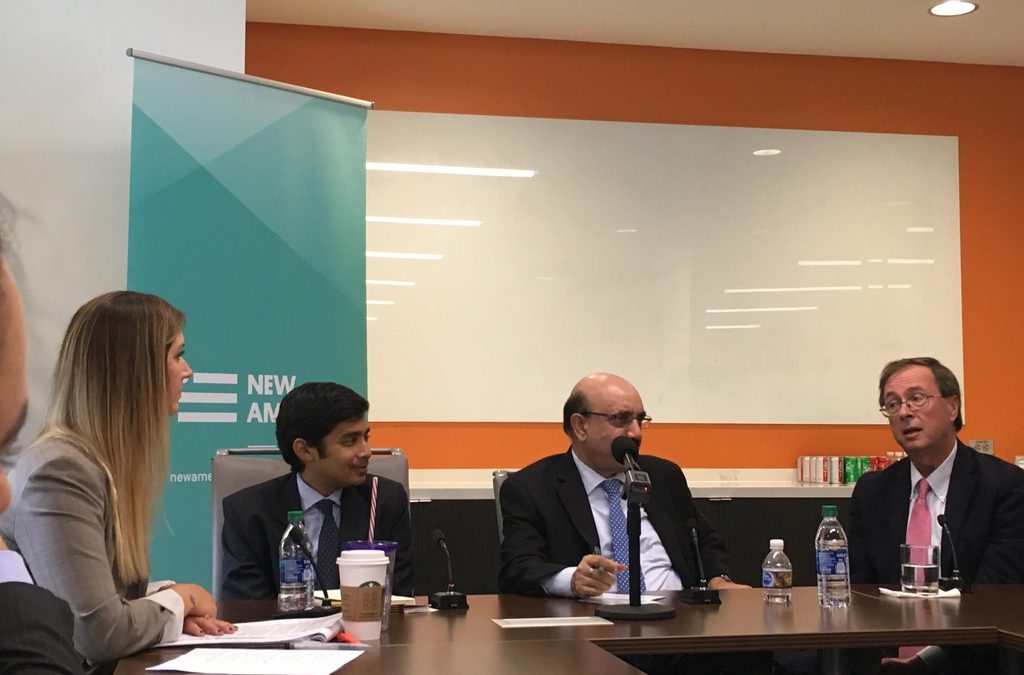 WASHINGTON — Azad Jammu and Kashmir President Sardar Masood Khan said Wednesday that there is a “human rights crisis and a humanitarian crisis” in Kashmir, which has been under lockdown and curfew by Indian for 59 days.

Khan told an audience at the progressive New America think tank that the U.S. government is being very “tight-lipped” and “cautious” about condemning India’s move to abrogate the special status of Kashmir, part of which is administered by India and another part by Pakistan. Accompanying Khan were members from the Pakistan embassy.

He suggested said that “travel and trade sanctions should be imposed in India” and  appealed to the U.S Congress to “take cognizance” of the happenings in Kashmir and hold hearings” to create awareness among the lawmakers because “the U.S. has the power to intervene.”

But Anish Goel, a senior fellow at New America, said that the U.S. was “not looking at it from the prism of India” and has always maintained that it would “happy to be involved if both sides required” it.

Alice Wells, acting assistant secretary of state for South and Central Asian affairs, said at the United Nations on Sept. 26 that President Donald Trump “has a strong relationship with the leaders of both India and Pakistan, and the world would benefit from reduced tensions and increased dialogue between the two countries.”She added that “the president is willing to mediate if asked by both parties,” she added.

Also at the UN General Assembly, Pakistan Prime Minister Imran Khan called Kashmir the “most critical” issue to him and called on the world to respond to what’s happening in Kashmir. India maintains that this is an “internal matter.” Indian Prime Minister Narendra Modi, who was also recently in the U.S. for the UN meeting, kept mum on the issue of Kashmir on the global forum.

On Aug. 5,  the Indian government revoked article 370 ending the “special status” of the state of Jammu and Kashmir. Article 370 included a set of temporary provisions including Jammu and Kashmir’s ability to have its own flag and constitution, and the autonomy to make laws on all matters concerning their citizens except for defense, communications and foreign affairs. Before that, the Indian government put all local leaders in the state of Jammu and Kashmir under house arrest, imposed a communication lockdown in the area, disconnecting all internet and telephone services, and also imposed a curfew, prohibiting people from leaving their homes, especially in larger groups. The Modi government also beefed up the military presence in the already heavily militarized area by deploying an additional 36,000 troops in the region.

While these restrictions have been lifted in areas of Jammu, the situation in Kashmir has been unchanged.

There have been a number of protests in the U.S. by members of the South Asian communities demanding that the Indian government change its actions in Kashmir.