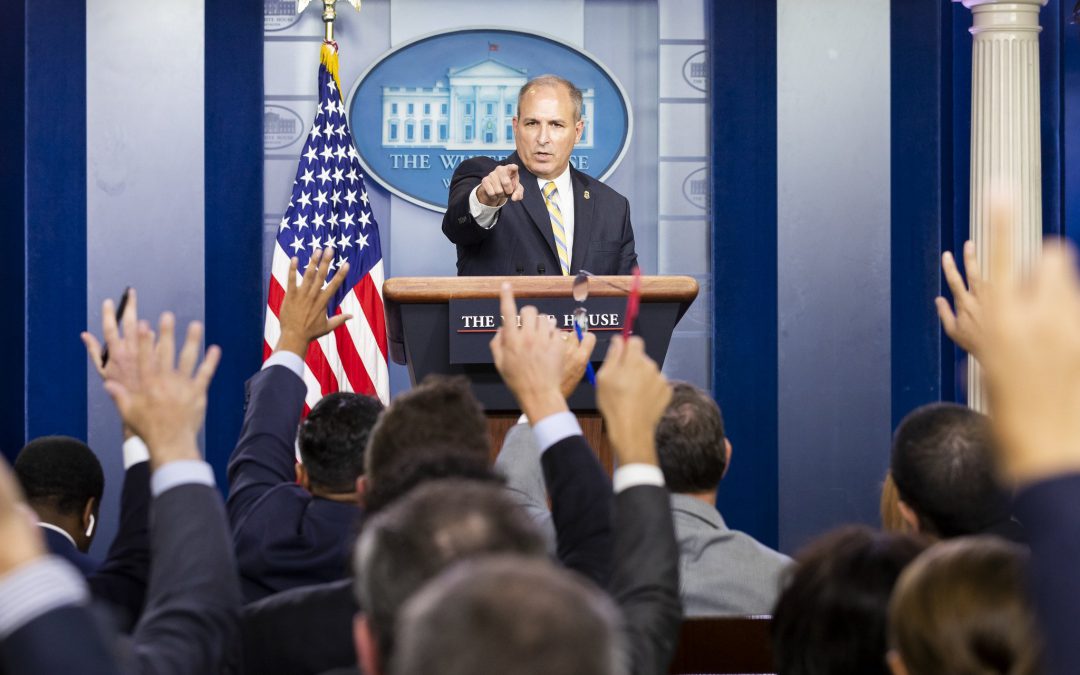 Data released by the government Tuesday shows September saw the lowest number of law enforcement actions this fiscal year, marking the fourth consecutive month of decreasing border apprehensions. The apprehension numbers are down 64% from their peak in May, when the U.S. Border Patrol apprehended 132,887 undocumented migrants along the southwest border.

At a news conference in the White House, Morgan commended the governments of El Salvador, Guatemala and Honduras for taking steps to resolve “a regional crisis” and praised Mexico’s cooperation with the U.S. as “one for the history books.” The government of Mexico, under President Andrés Manuel López Obrador, has pledged its support for the expanded use of the Migrant Protection Protocols.

Under MPP, the United States requires individuals seeking asylum or admission to wait outside U.S. territory for the duration of their immigration proceedings. Despite facing a challenge to MPP in the federal courts, the Trump administration has already sent nearly 50,000 migrants back to Mexico.

Prior to 2007, annual border apprehensions frequently crossed the 1 million threshold, but have hovered around 500,000 arrests or less in each of the past 10 years.

The latest report shows CBP has encountered 977,509 people attempting to cross the border illegally over the course of the year, most of them apprehensions — the highest level of apprehensions at the southwest border in 12 years.

“These are numbers no immigration system in the world is designed to handle,” said Morgan.

He credited the countries in the region for their cooperation but said Congress must provide a long-lasting solution through immigration reform, a rebuke of congressional inaction on immigration he has expressed before.

A firm ally of the White House and rumored to be on the shortlist to run the Department of Homeland Security, Morgan has been outspoken in pushing the narrative that President Donald Trump is “delivering his promise” to build a wall on the border with Mexico.

In his prepared remarks, Morgan said CBP has already constructed 71 miles of “new wall” with the help of the Army Corps of Engineers and expects to have 450 miles done by the end of 2020. Later clarifying these remarks, he acknowledged the term “new wall” meant replacing old, damaged and otherwise inadequate barriers, such as the vehicle barriers used in some places, but doubled down on the importance of this construction.