Cummings lies in state in Capitol: ‘He was strong, but also kind and caring and honorable” 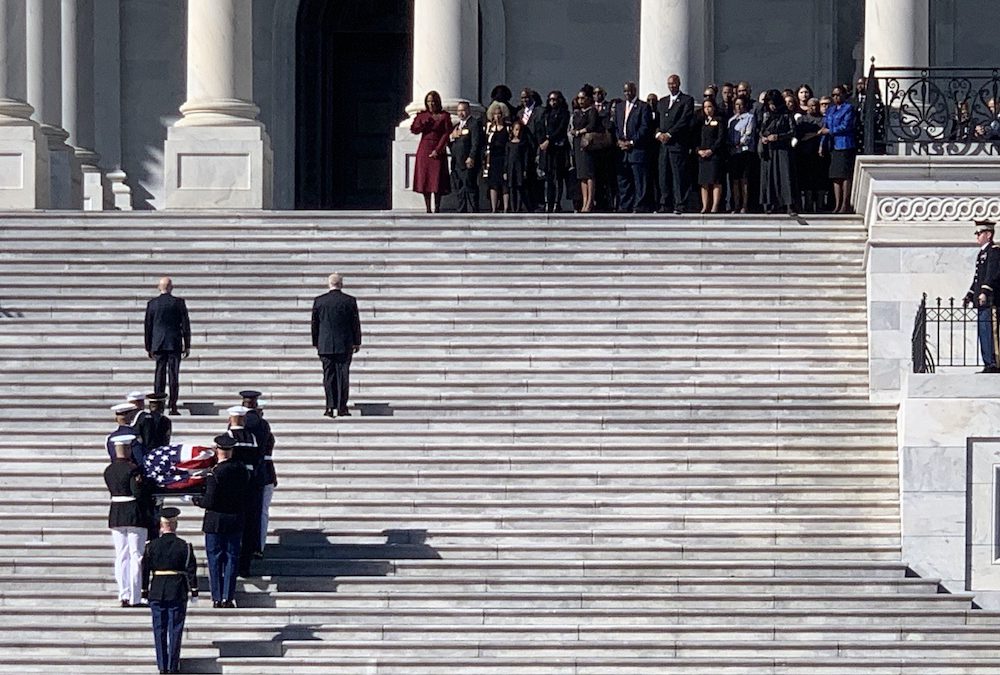 WASHINGTON – In the Capitol where Rep. Elijah Cummings advocated for civil rights and equality for 23 years, crowds passed quietly beside his flag-draped casket on Thursday as it lay in state.

Cummings died Oct. 17 at age in Baltimore due to complications concerning “longstanding health challenges,” his office said in a statement.  He was the first African American lawmaker to lay in state in the Capitol.

In a private ceremony in National Statuary Hall at the Capitol attended by many members of Congress, House Speaker Nancy Pelosi said, “Elijah was truly a master of the House; he respected history, and in it, he helped reshape America’s future.”

“He really taught me a lot about democracy, as an Egyptian, and good governance, accountability and civil rights, obviously,” said Maiisa Khattab from Cairo, Egypt. 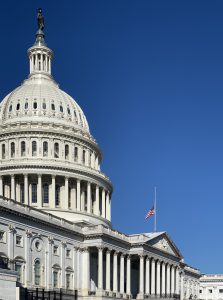 The Capitol’s flag was half-mast Oct 17 when Rep. Elijah Cummings died. It will be half-mast, following a presidential proclamation, until Friday (Chiara Vercellone/MNS)

David Johnson, a retired history teacher from Queens, N.Y., took an early flight Thursday to honor Cummings’ memory. He said he was deeply touched by his fight for civil rights and equality.

“The biblical Elijah was a prophet, and prophets not only predicted the future but they told truth to power, and [Cummings’] public life was a testament to challenging power, while also having the generosity of spirit to embrace people who would otherwise be enemies to him,” Johnson said.

But not every visitor agreed with his positions Jim Phillips, who attended President George H.W. Bush’s lying in state last year, said he didn’t agree with Cummings’ politics, but believed the congressman closed the gap on the socio-economic issues in Maryland and the rest of the country.

“Even though I differ in philosophy and politically, I still think I have a respect for the office,” Phillips said. “[…] I still respect what he stood for regardless of how I view politics.”

Trés McMichael, 22, remembered his encounter with Cummings when he was a teenager at a concert he was singing at. He said “[Cummings] and his wife Maya walked in and they came and sat down next to us. They wanted to know who we were and not just as singers, but as people. They wanted to ask our ideas about what we thought Baltimore needed. He inspired me to also take up the fight, and to do more and challenge myself to be better about my city.”

Cummings was chairman of the House Oversight and Reform Committee and played a key role in the impeachment inquiry: in September, Cummings was one of three congressmen to issue a letter along with a subpoena for Secretary of State Mike Pompeo.

Cummings came to be one of the most respected members of Congress during the decades he held office. He helped pass crucial legislation that expanded voting rights by promoting early voting, absentee voting and other ways to help citizens cast their ballots.

His funeral will be held Friday at New Psalmist Baptist Church in Baltimore, where he worshipped for nearly 40 years. Former Presidents Barack Obama and Bill Clinton are among high-profile Democrats set to speak at the ceremony.