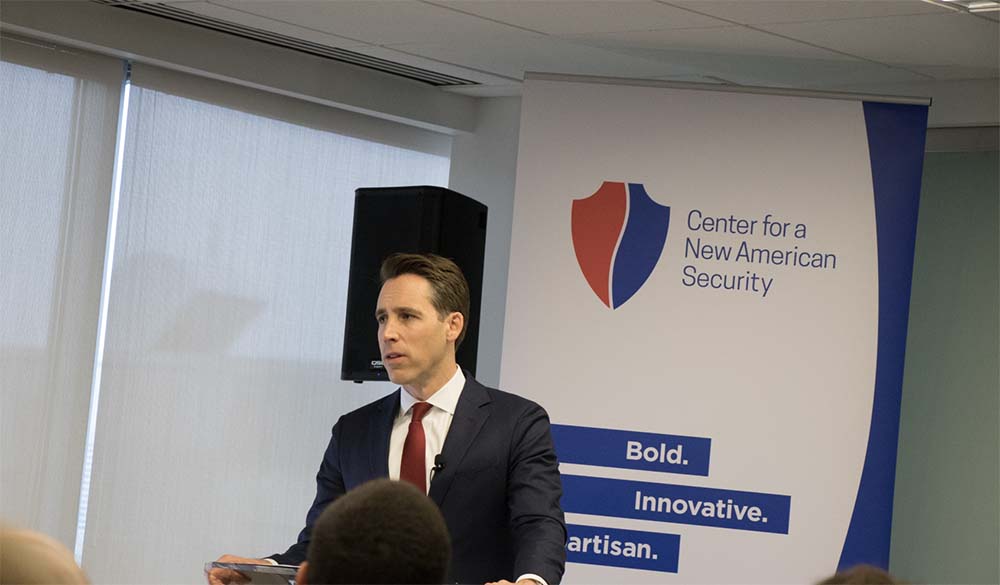 WASHINGTON — U.S. foreign policy must acknowledge greater competition from Russia and China as global powers rather than current policies that assume America as the sole superpower, Sen. Josh Hawley, R-Mo., said Tuesday at the Center for a New American Security.

“In light of a new era of great power competition… our foreign policy is not to remake the world, but to keep America safe and prosperous,” he said. “China and Russia are threats to our country in this century.”

The Republican, a member of the House Armed Services Committee, said that the U.S. government should take middle class interests into consideration in crafting foreign policy, especially when it comes to trade. The U.S. should look beyond China and explore stronger trade relations with India, Japan and Vietnam. He also cited the recent NBA and Disney controversies, saying American companies shouldn’t appease the Chinese government in order to continue to have access to the Chinese market.

Hawley, who visited Hong Kong last month, appealed to the Senate to pass his bill that would impose sanctions on China if it commits human rights violations in Hong Kong. The House already has approved the measure.

“China is aiming for regional domination that greatly threatens the U.S.,” he said. “Our foreign policy around the globe must be oriented to this challenge and focus principally on this threat.”

He said the U.S. also needs to do more to prevent further Russian expansion into Europe, and he called for Germany as a European partner to take more measures to limit Russian influence in the region.

In the Middle East, Sen. Hawley said, counterterrorism is an essential part of foreign policy to prevent the growth of terrorist networks that could strike the U.S.

“We have strong interests making sure the great Middle East is not dominated by any power that would be the most threat there,” he said.