WASHINGTON—Mayor Muriel Bowser signed legislation Tuesday that expands sexual assault survivors’ rights to an advocate and codifies the rights of teenage victims in the city.

The Sexual Assault Victims’ Rights Amendment Act of 2019 extends the right to a victim advocate to survivors as young as 13 years old. The right to an advocate had been limited to adults. A victim advocate is a trained professional who supports survivors through criminal justice proceedings, including hospital and police interviews. Additionally, the law guarantees advocacy services at all area hospitals and increases the trauma-informed requirements for advocate training.

The new law updates provisions from a similarly titled 2014 law, which first guaranteed an adult survivor’s right to have an advocate during police and hospital interviews.

“By passing and signing (the law), we are sending the clear message to survivors of sexual assault: your voices matter, your stories will be heard, and your advocacy will continue to improve the lives of people in our city,” Bowser said during the crowded bill signing ceremony at the John A. Wilson Building. 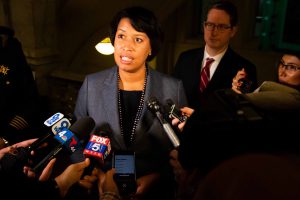 “We took a lot of time to make sure we got it right with a lot of persistence,” Bowser said of the legislation. (Mark Satter / MNS)

Research conducted by an independent consultant for the bill found that teenage victims were less likely to tell their parents about sexual assault. The new provisions  allow teenagers to get resources immediately without involving their parents.

“We don’t want to have any barriers for teenagers to be seeking health care at a really critical time,” said Marisa Ferri Light, an organizer for the D.C Justice for Survivors Campaign.

Bowser emphasized the collaborative nature of the legislation. She said that conversations with victims, survivors and advocates informed the updates to help “better align the legislation with our DC values.” Community groups such as D.C. Justice for Survivors, Network for Victim Recovery of D.C., the D.C. Rape Crisis Center and the Children’s Law Center helped craft the bill.

Ferri Light said that updated legislation is necessary to fill gaps within the 2014 version, which limited advocacy access to adults at Washington Hospital Center. She echoed how critical it was to bring survivors’ voices to the table. The D.C. Justice for Survivors Campaign helped facilitate meetings between survivors and council members and organize testimony before the Committee on the Judiciary and Public Safety.

“For more than a year, key stakeholders came together to grapple with these issues, explore what is being done in other jurisdictions with regard for similar crimes, and to learn from the experiences of those most directly impacted by this legislation,” she said.

Jenica Wright, who leads the D.C. Justice for Survivors Campaign along with Ferri Light, said that because sexual assault criminal justice proceedings are complicated, access to an advocate is often crucial for a just outcome. Many steps of the process are time-sensitive, such as forensic medical exams that must be completed within 96 hours. Wright said advocates can help victims make the right choices for their specific experience.

“You’re not in the right frame of mind to make all these really important decisions,” she said. “And so to have someone walk you through them, even though you’re still capable of doing it, it makes it easier.”

There have been 183 reported cases of sex abuse in the city this year, according to data from the Metropolitan Police Department.

“There is still more work to be done,” Ferri Light said. “The law is the articulation of these rights, but now the really hard work of implementation must begin.”