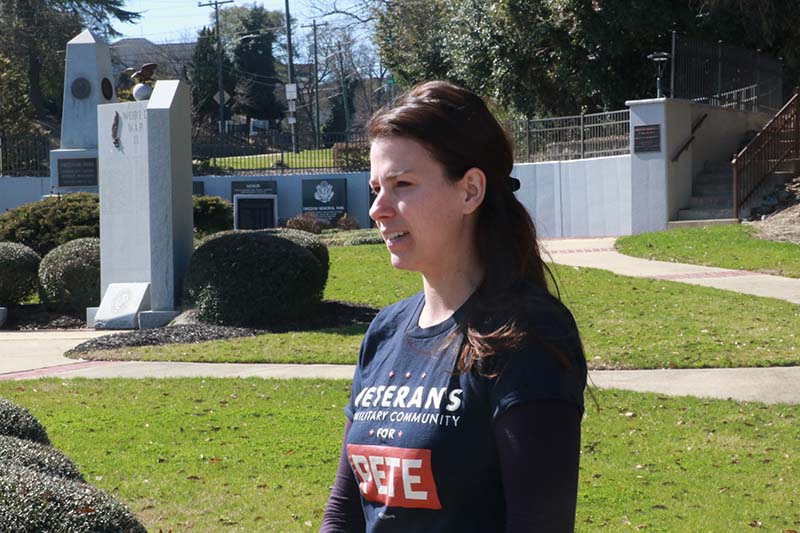 FAYETTEVILLE– Hours before former South Bend Mayor Pete Buttigieg announced he was suspending his campaign for the presidency on Sunday night, Buttigieg campaign staff and volunteers were still optimistic about his chances to win the North Carolina Democratic primary.

“I think one of my favorite things about Pete is that there’s a seat at the table for everyone,” Catherine O’Connor, the veterans engagement director for Team Pete said.

In Fayetteville, Catherine and other volunteers for the Buttigieg campaign campaigned with veterans and prospective voters in the area on Saturday afternoon.

Moral was high, as were the hopes, as people in “Veterans for Pete” t-shirts went knocking on doors around the Fort Bragg area.

North Carolina state Rep. Grier Martin, himself a veteran of the war in Afghanistan, volunteered for Buttigieg and said he was “particularly encouraged when I hear from a lot of Republicans that say that, ‘I don’t agree with everything he’s (Buttigieg) done politically, but he’s the only Democrat that I could vote for.”

O’Connor said that the campaign canvassed in areas near military bases, emphasizing issues that matter to veterans, such as the quality of VA health care, spousal unemployment, among others.

When news broke that the South Bend mayor was suspending his campaign, 48 hours before Super Tuesday, they were left heartbroken and disappointed.

“It’s too bad that the people of the United States didn’t get to know Pete really well,” said Steve Matz, a veteran and South Bend native who was in North Carolina campaigning for Buttigieg. “He inspired the best in each of us, and America.”

“It all happened so quickly,” O’Connor said.
In any campaign season, there is only one campaign that doesn’t drop out, she said. “You go into campaign knowing this might happen…I, of course, wish he could have won, but it was not to be”

“I wasn’t expecting it, but I’m not surprised by it,” Reggie Love, the personal aide to President Obama and Buttigieg volunteer. Love was in Durham, N.C.,rallying prospective voters.

Love said he knew a Buttigieg win in South Carolina would be difficult, because the campaign had depleted its resources in Iowa and New Hampshire. Buttigieg, he said, shared many similarities with Obama.

Buttigieg started the primaries well. He had finished the Iowa caucuses with a plurality of delegates, and he tied Sanders in New Hampshire with nine delegates each.. However, Buttigieg lost momentum in the next two primaries. In Nevada, Buttigieg finished third, only gaining three out of a possible 36 delegates. In South Carolina, Buttigieg finished in fourth place.
Buttigieg’s inability to attract black voters in South Carolina contributed to the end of his campaign.

While Buttigieg had strong fundraising totals during most of 2019, raising almost $25 million in quarter two and quarter four, Buttigieg had not reached his $13 million donation goal as of Sunday night.

Buttigieg had been supported by VoteVets, a hybrid PAC, a progressive group that supports veteran candidates. VoteVets supported Buttigieg’s campaign through almost $3.4 million in outside spending.

Out of the Democratic candidates who are not self-funding their campaigns, Buttigieg had raised the third most amount of money. According to data from the Center for Responsive Politics, Buttigieg had raised about $81.5 million, based on a report filed on January 31. Only Sens. Elizabeth Warren of Massachusetts and Bernie Sanders of Vermont had raised more money, and Buttigieg had more cash on hand than Warren. Buttigieg’s decision to drop out may be surprising given that he had more cash on hand at the time of that report than Sen. Amy Klobuchar, D-Minn., and Warren, who are both still in the race.

The democratic competitors still in the race, including Sanders and Klobuchar, lauded Buttigieg for running a “historic” and “inspiring” campaign.

Among his supporters and staff in North Carolina, some said that they thought he would run again for president. Steve Matz said, “When I hear suspension, I hear, okay, well we’ll pick it up sometime in the future, maybe four years from now, or something like that.”

O’Connor said she would be open to working for Buttigieg again if he decided to run for office saying, “He could run for anything and I would just sign up for it… I would not hesitate to (work for another Buttigieg campaign).”