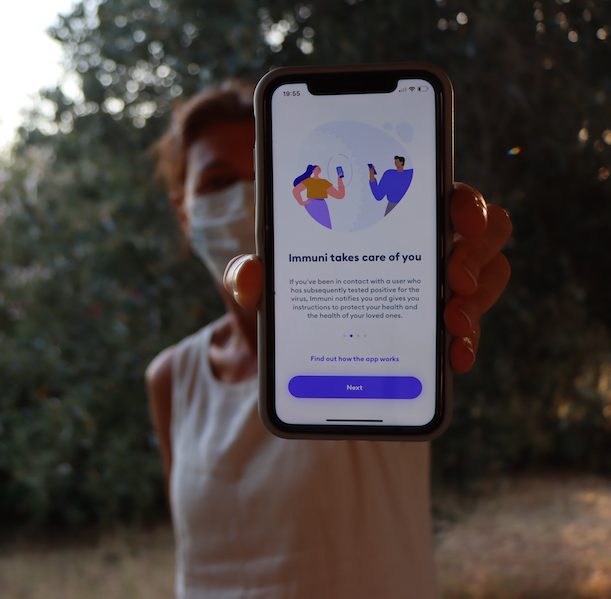 Immuni, the Italian contact tracing app, has been downloaded by about 7% of the Italian population. At least 20% needs to download it for it to be effective, according to a study by Oxford University. (Silvia Martelli / MSN)

In early June, a number of European countries, including Italy, France and Germany, launched contact tracing apps designed to alert users when they have come into contact with someone who has tested positive for Covid-19, part of efforts to prevent a second wave as European countries loosen up lockdown regulations. But so far it hasn’t caught on with enough Europeans to be effective.

Immuni (Immune), the Italian contact tracing app, has been downloaded by 4.1 million people, equivalent to about 7% of the Italian population, since its launch on June 8. Most of the downloads were recorded in the days following the app’s launch and at times when cases peaked.

“The app failed to reach the set target,” said Italian Special Commissioner for COVID-19 Domenico Arcuri. “The main reason for this is that the current coronavirus phase is being [wrongly] met by Italians with a general relaxation.”

Italy is not alone in its struggle to convince citizens to download the contact tracing app. StopCovid, the French version of Immuni, also has had relatively few users. It launched on June 2, and as of June 23, the latest date for which data was available, only 1.8 million, or 2%, of the almost 70 million French citizens had activated it, according to Cédric O, the junior minister for digital affairs in France in charge of the development of the app. What’s more, it has been subsequently deleted by 460,000 people.

Around 20% of a country’s population needs to use the app for it to be effective, according to a study by Oxford University’s Big Data Institute, which has advised Britain, France, Germany and Italy on the technology. That would require 8 more million users in Italy, and about 12 million in France.

Germany has nearly met the goal with its app, Corona-Warn-App, which has been downloaded by 15 million, or almost 19%, of its 80 million citizens. Throughout the pandemic, the country has been particularly successful at containing cases.

“If the app is the only method to track the virus, then a very high percentage needs to be using the app, which we had previously set at 60%,” said Luca Ferretti, a senior researcher at the Big Data Institute. “But if the app is used alongside other strategies [such as widespread testing and a network of human tracers], then the number drops significantly.”

Professor Christophe Fraser, a senior author of the Oxford report, stressed the importance of adopting strategies, such as the app, “to exit from the lockdown whilst minimizing the risk of resurgence.”

With the app, “one infection will be averted for every one to two users,” he explained.

Even if countries can get more citizens to use the app, there are two concerns: the technology has not been proven capable of effectively tracing contacts and it may infringe upon people’s privacy rights.

To address privacy concerns, the Italian app was built on a platform developed in a rare collaboration between Apple and Google that sided with privacy advocates. The initial proposal set out a centralized system that would send data about potentially contagious interactions to the government.

The Apple-Google technology limits what data can be collected about reported infections, such as how long or how closely an infected person was in proximity to someone else.

The French app does not apply Apple and Google’s standards and is rather built on a more centralized model that gives health authorities central control over tracing data.

“It is highly abnormal that you are constrained as a democratic state in your technical choice because of the internal policies of two private companies,” O said.

But while the voluntary approach and the restrictions on data collection might reduce the apps’ effectiveness, they help assuage public concerns about state intrusion.

“The app could have a major impact — it depends on how it will be used,” said Paola Pisano, Italy’s minister for technological innovation.

Other governments have decided that the privacy intrusion is not worth the potential benefits. In mid-June, Norway halted the use of its app — which had been downloaded by about 14% of the people over the age of 16 — just over two months since its implementation.

An Amnesty International investigation found that Norway had one of the most invasive tracing apps in the world.

Norway “has run roughshod over people’s privacy, with highly invasive surveillance tools which go far beyond what is justified in efforts to tackle COVID-19,” said Claudio Guarnieri, Head of Amnesty International’s Security Lab.

Navigating privacy concerns delayed the release of contact tracing applications across Europe. Germany, which has strong privacy laws, launched its Corona-Warning-App weeks later than planned because of debates within the government about data protection.

“This is not the first corona app, but I am convinced it is the best one,” said Helge Braun, chief of staff to Chancellor Angela Merkel and a trained physician, upon the app’s launch.

German Health Minister Jens Spahn stressed that, as coronavirus restrictions are progressively lifted, the app makes “a key difference in that we can inform others of our infection the way we would not have been able to do without it.”

The U.K. also faced challenges: in June, it made a U-turn, abandoning a centralized coronavirus contact-tracing app that had been developed for over three months and had cost millions of pounds because of privacy concerns as well as repeated warnings from experts that it would not work. The U.K. has now switched to the Google-Apple technology, but the new app is months away from being ready.

According to the Council of Europe, they have the potential to “save precious hours of work of public health staff tracing the chain of infection, and could do so with rapidity that matches the speed of the virus.”

But Ferretti lamented that Italy, as well as other European countries, had not really considered what steps should be taken when a person receives a notification of a potential exposure to the virus.

“Nobody factored in, once people have a notification, what should they do?” he said.

The apps have surely been problematic, but they might be crucial to help trace infections in case of a second wave of coronavirus.

“I worry there might be a second wave of cases in the fall,” said Arcuri. “Contact tracing apps would be very useful then.”