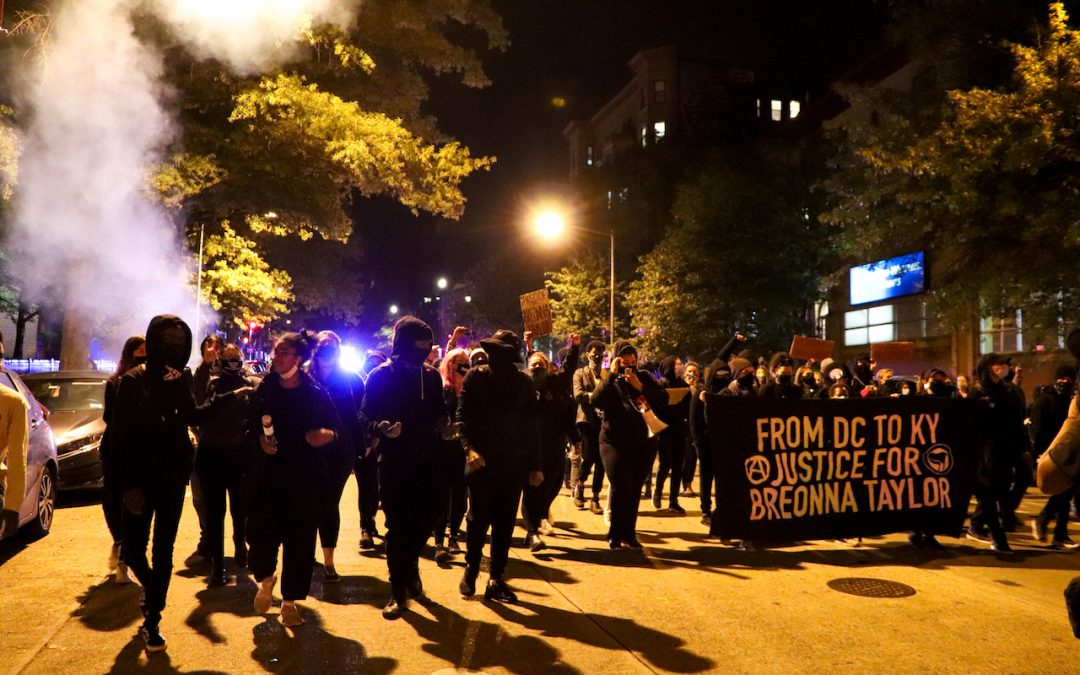 WASHINGTON – A summer marked by cries for justice in the police shooting of 26-year old Breonna Taylor may be coming to a head this week. As a nation already riddled with tension awaits the fates of the officers involved in Taylor’s death, protesters in DC took to the streets on Tuesday night to reiterate their stance that justice be served. The jury is expected to announce its decision to the Jefferson County Circuit Judge Annie O’Connell at 1:15 p.m. on Wednesday, according to the Courier-Journal.

On Monday, Louisville Metro Police Department Interim Chief Robert Schroeder issued a memorandum to the public effectively declaring a state of emergency for the department. The memo stated that it was issued in anticipation of Kentucky Attorney General Daniel Cameron’s announcement regarding whether or not the officers involved in Taylor’s murder will be persecuted.

Later that night, Sgt. Jonathan Mattingly – one of the accused officers – sent an email to around 1,000 LMPD officers. In his 2 a.m. tirade, Mattingly apologized to his colleagues for what he perceived to be a failure in Louisville’s leadership. “You do not deserve to be in this position. The position that allows thugs to get in your face and yell, curse and degrade you.”

In the email, Sgt. Mattingly also makes mention of impending difficulty surrounding the next few days, and says, “regardless of the outcome today or Wednesday, I know we did the legal, moral and ethical thing that night.” 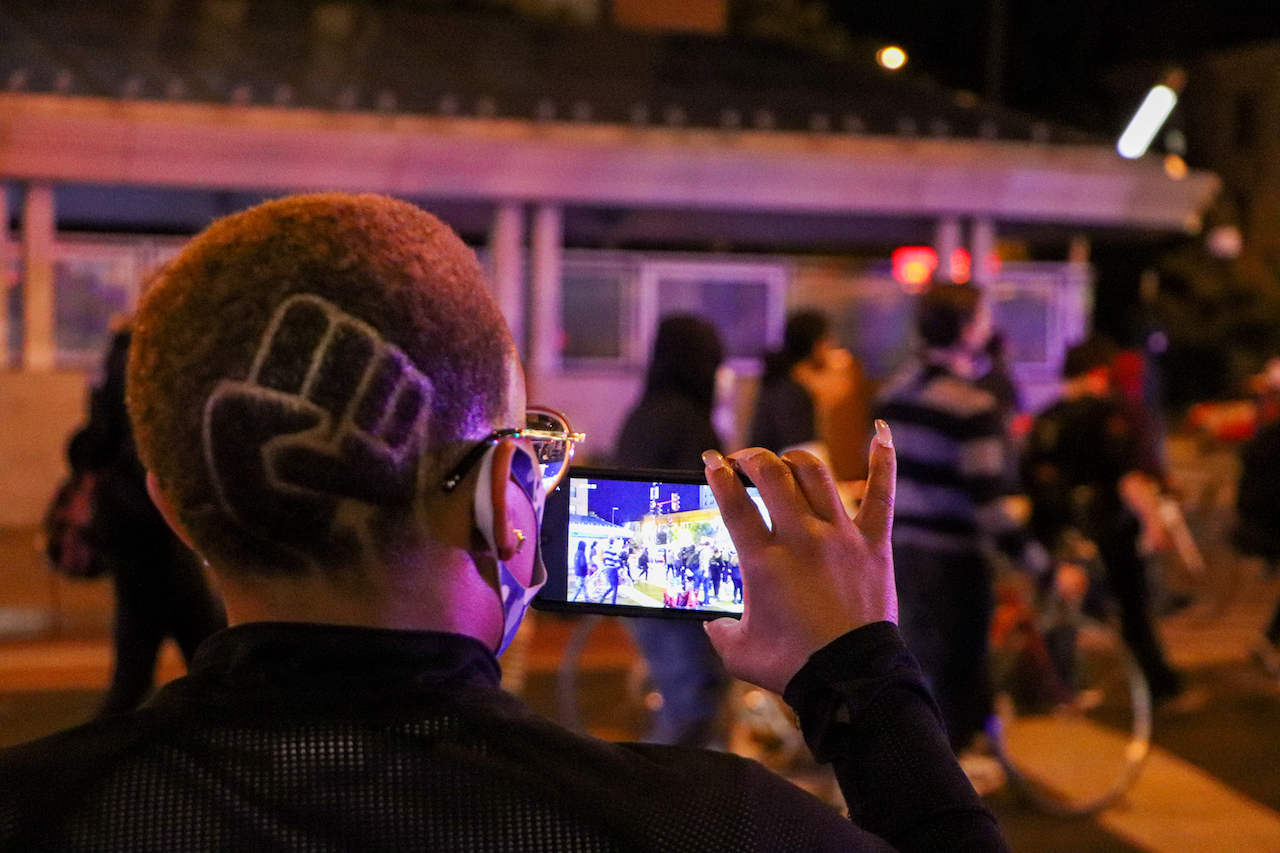 An onlooker takes photos of the group as they march by. (Madison Muller/MNS)

In Washington, where organizers who have been in the streets for more than three months demanding justice for Black lives, activists organized a Tuesday night protest in Columbia Heights to demand that justice for Breonna Taylor be served in the jury’s decision.

At around 7:20 p.m. folks began to arrive at Civic Plaza donning all black attire and COVID-19 face masks, as recommended by the event flier that was posted to Instagram. As more people trickled in, an organizer with the They/Them Collective – a group that has been organizing on-the-ground every Saturday this summer – delivered opening statements.  Notably, the group had an ASL interpreter present to increase accessibility in the space.

After opening statements about Breonna Taylor, whom the protest is organized to demand justice for, and safety — the group takes a 3 minute moment of silence to honor Taylor’s life. #DCProtests #JusticeforBreonnaTaylor pic.twitter.com/QaHVZgUvlP

Marching down 14th Street, which is known for its bustling restaurant scene, the group recited haunting chants like, “We push hard, we push harder for Breonna Taylor,” and “Say their names, which ones?”

Columbia Heights has been called one of the fastest growing neighborhoods in the country, which has unfortunately led to many longtime residents being priced out. The area is now known to activists as being heavily gentrified, meaning the culture that once defined the neighborhood has been changed by an influx of more affluent residents and businesses.

With no specific route announced prior to the march because of safety concerns with law enforcement, they continued to head south on 14th Street. As diners along the street raised iPhone cameras to take photos and video of protesters, many demonstrators asked not to be filmed. Their requests were oftentimes contested. 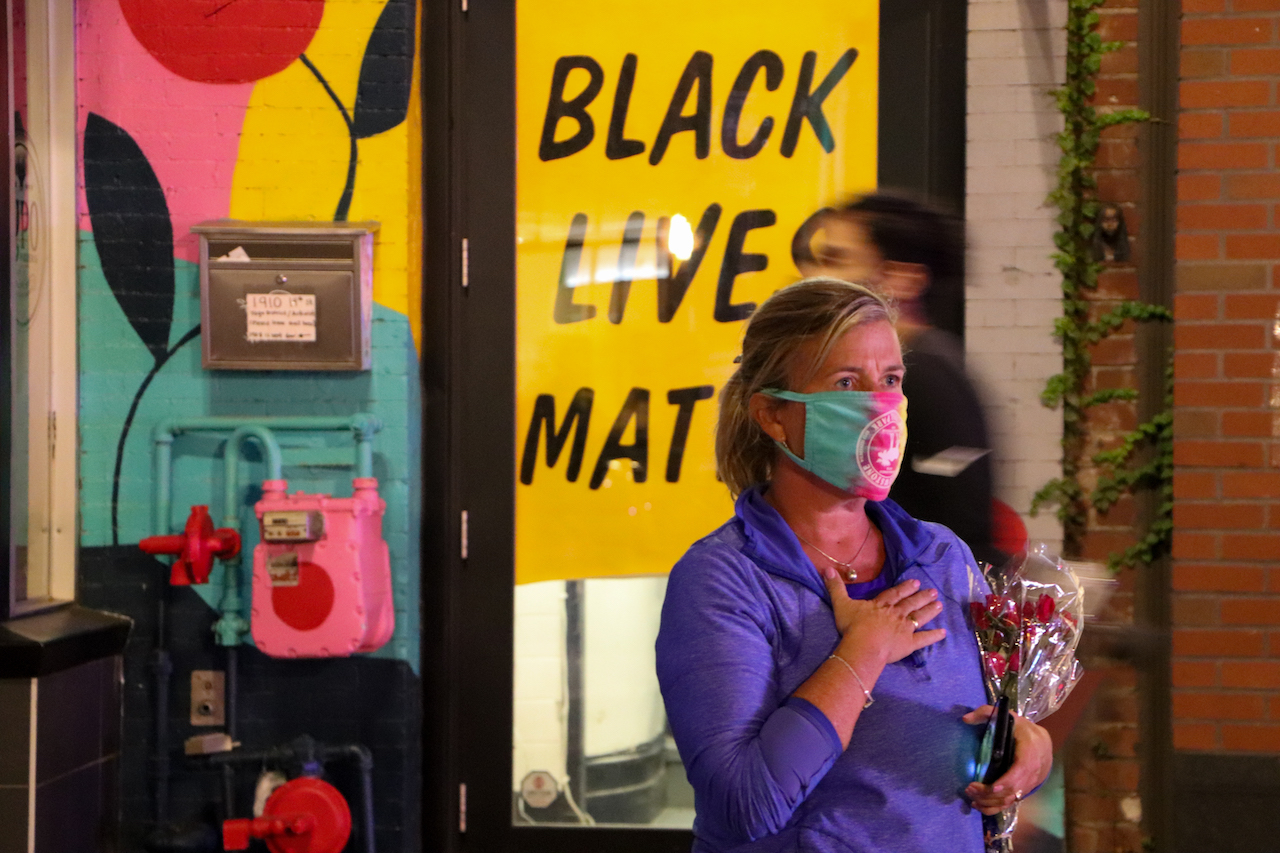 A woman who was dining with her family on 14th Street moved to watch the group go by, while holding a hand over her heart. (Madison Muller/MNS)

“Unauthorized photo and video has been used to harm and target our people,” protesters explained. “If you cared about Black lives, you wouldn’t take photos without consent.”

Local news outlets, like NBC4, have confirmed some of these incidences. They’ve also shed light on cellphones and cameras being confiscated from credentialed journalists.

After marching for nearly two hours, the group stopped for a water and food break. Sean Michael Love, an independent journalist from Black House News who has been on the ground covering protests all summer, said that protesters need to take these breaks during the march because they face so much resistance and often march for hours on end.

Law enforcement was present during the entirety of the march, following the group with cars and officers on bikes. As the night went on, their presence seemingly increased. At one point, when the group moved from 14th Street to the smaller, residential Riggs Street, law enforcement was positioned at each exit. Organizers ran back and forth trying to warn the group of potential ‘kettling’, a dangerous crowd control tactic that has been employed at protests around the country. Despite initial panic, the group was able to exit the intersection safely.

Because they have been protesting in the streets for months on end, organizers and protesters have become familiar with the media who cover their demonstrations. Midway through Tuesday night’s march, they became aware of two middle-aged men holding cameras at the rear of the group. They performed a quick factcheck on the legitimacy of these men’s news organization, Veteran Liberty Network, and found that their Twitter account had only been activated this month and did not include any relevant posts. Because of the dangers protesters have faced throughout the summer, they were quick to engage with VLN in the hopes of better understanding their intentions.

Chuck Modi, a journalist who has been embedded in DC’s racial justice movement all summer, explained to the men from VLN that many protesters and journalists have been unlawfully arrested and detained this summer, and protesters’ wariness is simply a safety precaution.

One of the main organizers from DC Freedom Fighters, Afeni, echoed Modi’s sentiments. She, too, spoke with the men in order to emphasize the importance of truthful and equitable media coverage that also prioritizes safety. “Just tell the truth out here,” she had said earlier. “A lot of these mainstream media outlets only cover what’s happening when it becomes violent. But, there’s so much more going on that people don’t get to see.”

Soon after, as the march began to disperse, a large group of officers on bicycles were deployed on a small group of folks that were moving away from the protest. They moved swiftly, with one demonstrator as their target, surrounding the individual to make an arrest.

Others who were down the street sprinted towards the scene to offer aid. National Lawyers Guild members who were attempting to get more information were pushed away, and another young woman was pinned against the wall with an officer’s bicycle for getting too close to the line.

They arrested someone and were pinning bike marshals and NLG members against a wall with their police bikes. #DCProtests pic.twitter.com/fdkmlbLonk

When asked by journalists what charges protesters had been arrested on, law enforcement responded by saying, “check the police blotter tomorrow.”

The protest concluded at around 11:45 p.m., but organizers said to stay tuned today for further action on Wednesday as the nation awaits the results of the grand jury’s decision. Already, organizers have put out a call for jail support at 3rd Street and C Street for the two folks arrested last night.