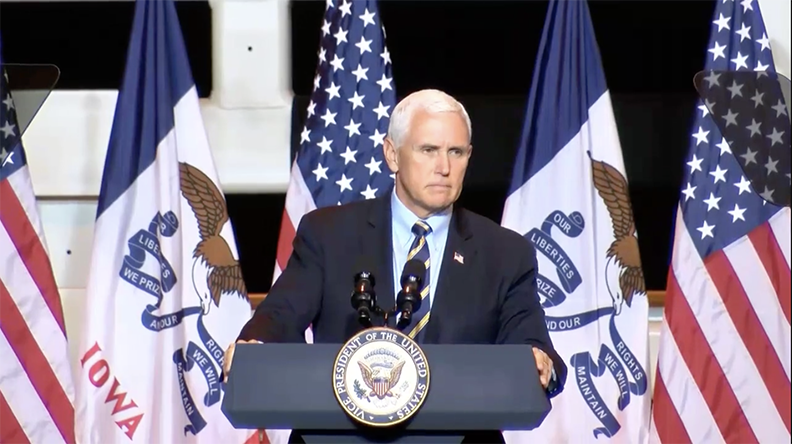 WASHINGTON – Vice President Mike Pence praised President Trump’s handling of the economy at a campaign stop in Carter Lake, Iowa on Thursday. “In our first three years, it was jobs, jobs, jobs,” said Pence. “In just three short years, seven-million jobs created all across America, including 11,000 jobs right here in the Hawkeye State.”

His visit to Iowa, where recent polls show a tightening race between President Trump and former Vice President Biden, comes just 32 days before the presidential election.

Joining him on stage was Secretary of Housing and Urban Development Dr. Ben Carson and Former Iowa Representative David Young, who is running to reclaim his former House seat.

The Vice President kicked off his speech by applauding the veterans in audience, as well as the Trump administration’s military policies. “This father of a United States Marine is proud to report to you we rebuilt our military, we restored the arsenal of democracy and we are finally giving our soldiers, sailors, airmen, Marines, Coast Guard and Space Force the resources they need to defend this nation,” said Pence.

“All of those jurists are men and women of integrity who will uphold all the God-given liberties of our Constitution like the freedom of religion, freedom of speech and the Second Amendment right to keep and bear arms,” proclaimed Pence.

Pence then spoke highly of President Trump’s handling of the COVID-19 pandemic, despite the deaths of more than 200,000 Americans since March. “As the head of the White House Coronavirus Taskforce, I can tell you first hand, President Trump’s action saved untold American lives,” said Pence.

The Vice President concluded his speech by urging supporters to vote in November, saying “we need you to go out and tell your neighbors and friends what four more years means.”