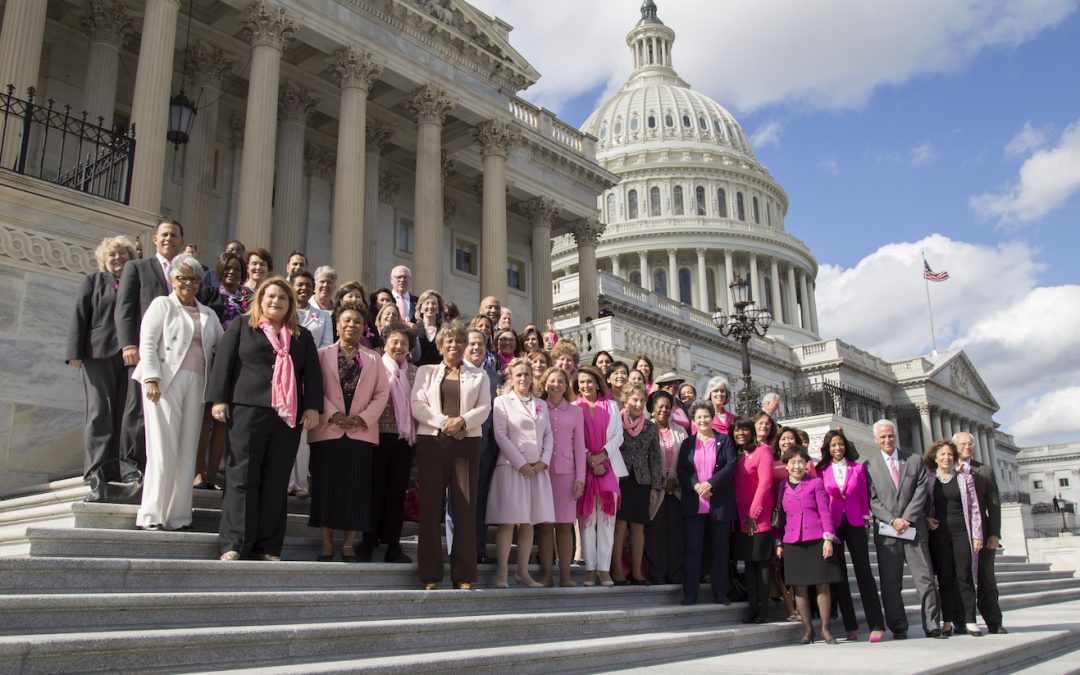 Congressional Caucus for Women's Issues, 2017. As women and minorities are seen more in government, it becomes easier for voters to forget about a candidate's race and gender and to focus on their impact. [REP. SUSAN BROOKS]

WASHINGTON—Despite historic levels of diversity on ballots nationwide, voters in the 2020 election are less concerned with a candidate’s race or gender than in times past.

A candidate’s race or gender still plays a role in many people’s decision to vote. But descriptive representation—the idea that people want to elect representatives that reflect their own self-description—has become secondary to a politician’s track record on supporting underrepresented communities, largely thanks to a changing electorate seeking more concrete proof of support from their representatives and a rapidly diversifying government that has helped normalize candidates from different backgrounds.

“The more we’re electing women and women of color and all of those people,” said documentary filmmaker Wendy Sachs, the easier it is to “move into the next phase where it doesn’t really matter anymore.”

Her documentary, “SURGE,” follows three women candidates running for House seats during the 2018 midterm election as it chronicles the record number of women congressional candidates. While the film is meant to be inspirational and a testament to the progress women and minority candidates have made in the U.S., Sachs said it’s important to remember that the U.S. is still far from reaching the goal of equal representation.

The data supports the idea of progress. Women and minorities have steadily gained representation in federal and state offices since 2014, according to data from the Center for American Women and Politics at Rutgers University. Minority women currently make up a record 38.6% of the 127 women in Congress and 25.2% of the 2,132 women state legislators (29.3% of the total) serving nationwide. Second only to last year’s record, 28.9% of state executive positions are held by minority women.

A record 115 women of color were nominated for House seats in the 2020 election. Only two minority women are on the 2020 ballot for Senate races despite women making up 30.8% of all Senate candidates. The majority of these gains came from the Democratic Party.

Diversity can impact legislation at all levels. A 2018 review of more than 80,000 records of communication between members of Congress and federal agencies during the 108th to 113th Congress found that legislators from underrepresented groups were more likely to advocate for members of those communities by six to nine percentage points.

Although the increase in representation of women of color has largely been limited to the Democratic Party within the last two decades, Republican nominations of women increased significantly in 2020.

CAWP data shows that Republican candidates are 28.7% of the total number of women of color House nominees in 2020, an increase from the last election but still less than the 32.4% of candidates nominated by the party in 2004.

In 2020, though, the impact of numerical gains in diverse representation on voters is being tempered by contextual events and new voter expectations.

“We aren’t in a ‘politics as usual’ circumstance,” said Danielle K. Kilgo, professor of journalism and diversity at the University of Minnesota. “And there are a lot of factors, threats and political circumstances of this moment that make it incredibly hard for women politicians of color to make the impact they could in other political times.”

Sara Guillermo, executive director of IGNITE, said she spoke with many Gen Z and millennial voters who did not feel like they could see themselves in any of the candidates on their 2020 ballots, but she urged them to vote anyway.

“You may not totally relate to this particular candidate,” she told them, “but there is a whole other part of the ballot that we need to get to and have some more deeper conversations about.”

Her group has focused on filling the 500,000 governmental seats that exist at the city level around the country, depending on a “trickle-up effect” to ultimately get more women up ballot.

Coles attributed much of her development as a leader and an activist to her work with IGNITE, which she says helped her understand the ways in which representation matters beyond physical attributes.