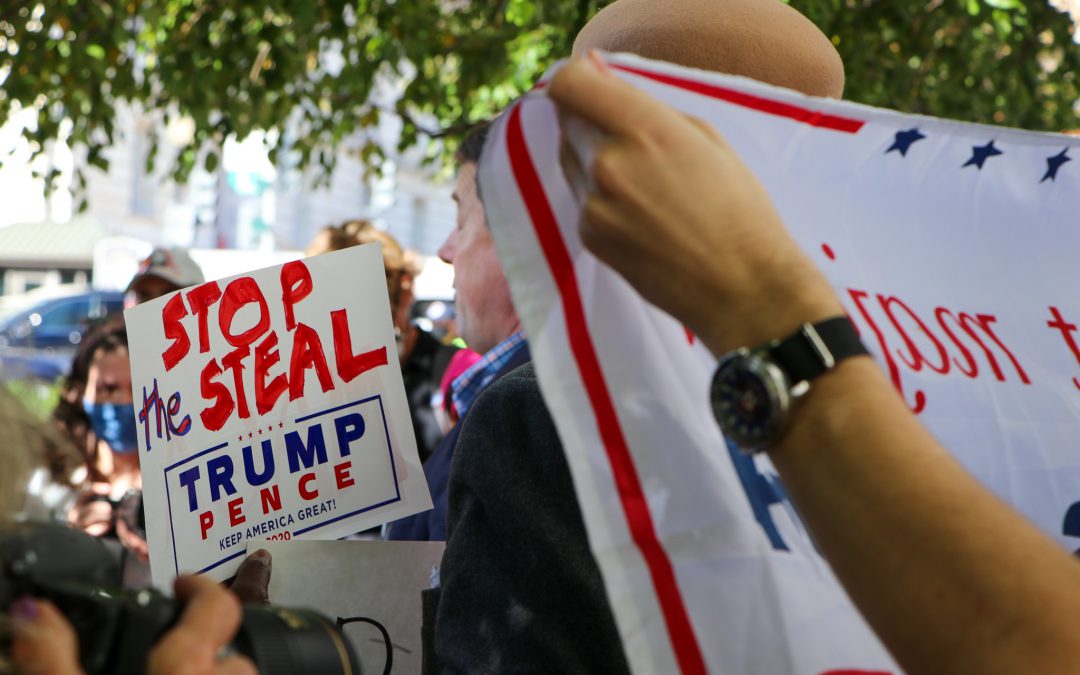 WASHINGTON — Protesters who believe Donald Trump won the election gathered at the Republican National Committee headquarters Thursday to demand Republican leaders “stop the steal” of the presidency from Trump, alleging Democrats are finding fake ballots or throwing them out until Democratic presidential nominee Joe Biden has enough votes to win.

“If this election is allowed to stand, it’s another coup that’s meant to dissuade the American people from our vote,” said Ed Martin, former Missouri Republican Party chairman and president of the conservative group Phyllis Schlafly Eagles. “The Republican leadership and elected officials should publicly say right now, every one of them, that they want the steal to stop, they want legal votes counted.” 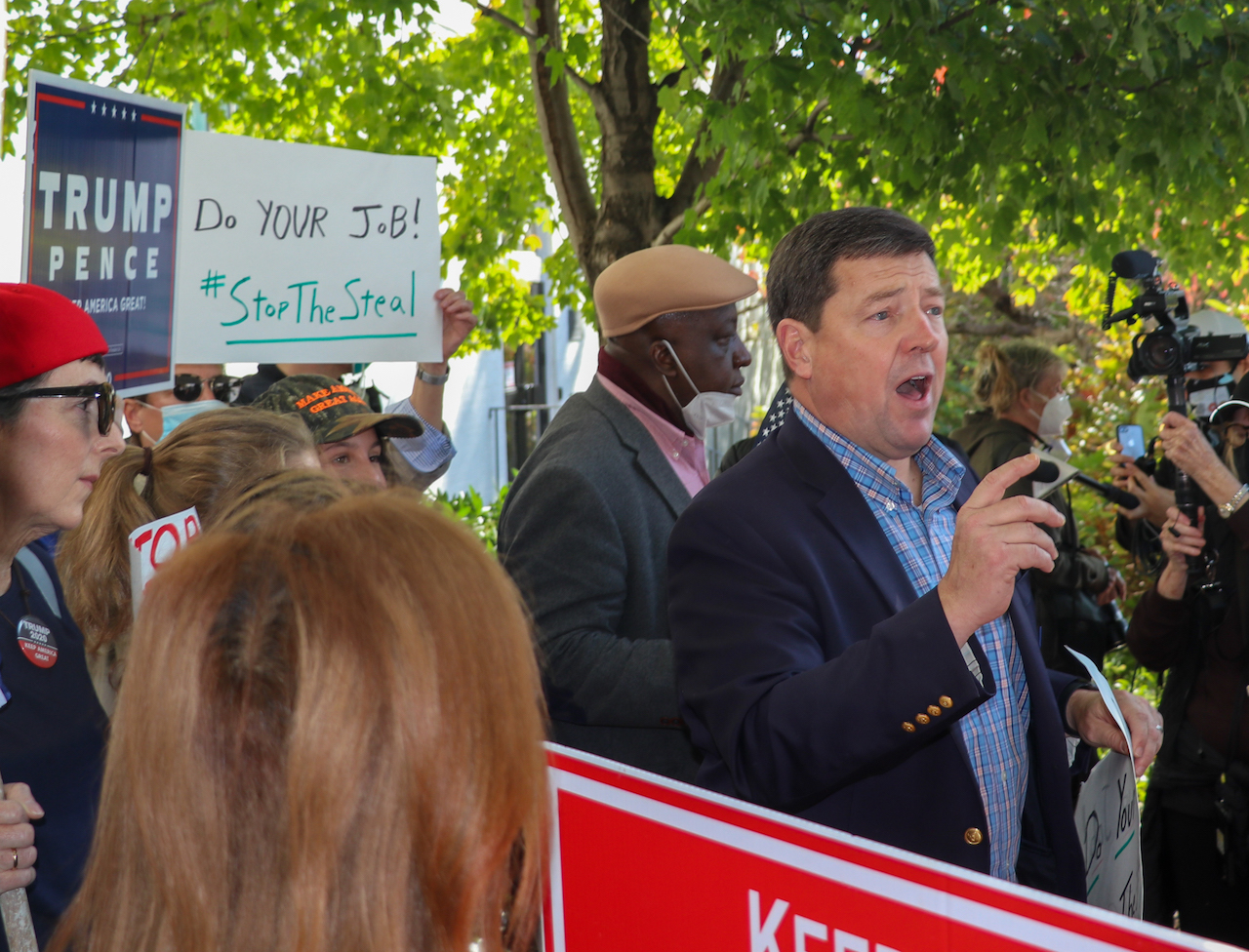 “When people are missing, you wonder if they’re on your side,” [Martin said about the Republican leaders who are not speaking up].

He claimed Trump won Georgia, North Carolina and Pennsylvania. “The whole thing is a managed operation by the (Biden) campaign and by the media to try to change the election,” Martin said.

Ballots are being counted in Pennsylvania, Georgia, North Carolina, Arizona, Nevada and Alaska. The Trump campaign has filed lawsuits in Georgia, Michigan and Pennsylvania alleging ballot harvesting. Trump supporters are rallying to “stop the steal.”

John Halpin, senior fellow at the left-leaning Center for American Progress, said several of the lawsuits have been dismissed because they lack evidence of voter fraud.

“The courts so far are not buying his outlandish claims of fraud and most likely will continue to reject these suits,” Halpin said. “It’s also not lost on courts that Trump is arguing to stop counts in some places, keep them going in others, and trying to treat different types of legal ballots differently.”

Martin claimed Democratic officials are throwing Republican watchers out of polling places. “If the game plan that was executed by the losing party, Joe Biden, is allowed to stand then the republic won’t have a function,” he said. Trump supporters cheered when one of them said that Biden has committed crimes against the American people.

John Fortier, director of governmental studies at the Bipartisan Policy Center, said election officials aren’t likely to stop counting ballots. “It is very reasonable to have a debate about what we think voting should look like, I just don’t think we have an illegitimate election,” Fortier said.

“This is a movement of Americans, and we want our Constitution and we want our founding values to be respected,” Martin said. “We count every legal vote, we have the rule of law. And what we’re seeing now in Philadelphia, Milwaukee, Arizona, is a violation of not only the law, but the spirit of America.”

Many of the protests are based on fabrications and conspiracy theories, Halpin said. 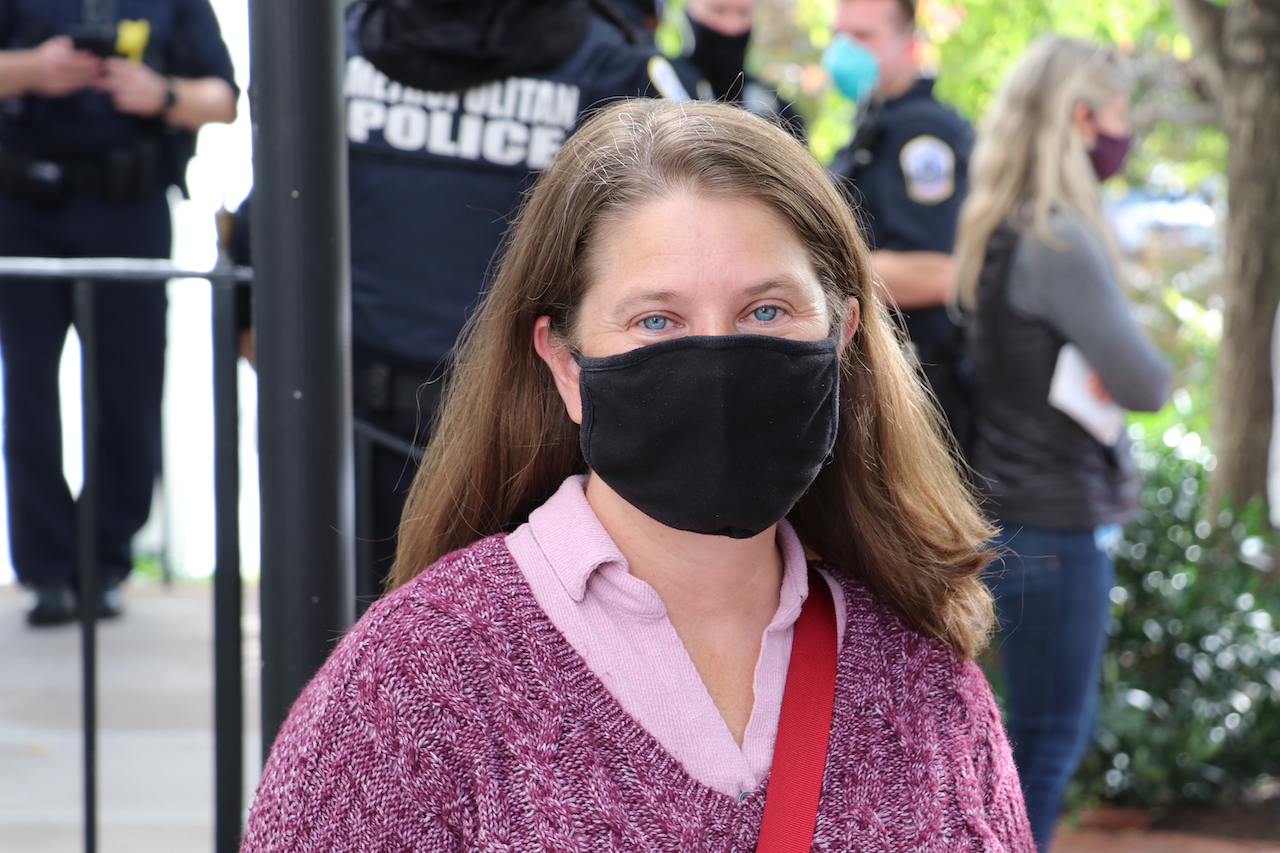 “I believe that Donald Trump won and that there’s an attempt to steal away votes in several states.”

Sarah Giddens, a 49-year-old from Fairfax County Virginia, said she believes Trump won the election and that the number of mail-in ballots contributed to voter fraud because people were collecting ballots of others and voting illegally.

She said that she would accept a Biden presidency if the alleged voter fraud was not happening. “We are not interested in rioting, we are not interested in violence. We are also not going to just sit back and be steamrolled while other people are willing to do things that are not right,” Giddens said. “We want to make sure that the president who was elected by the people gets sworn in on January 20th.” 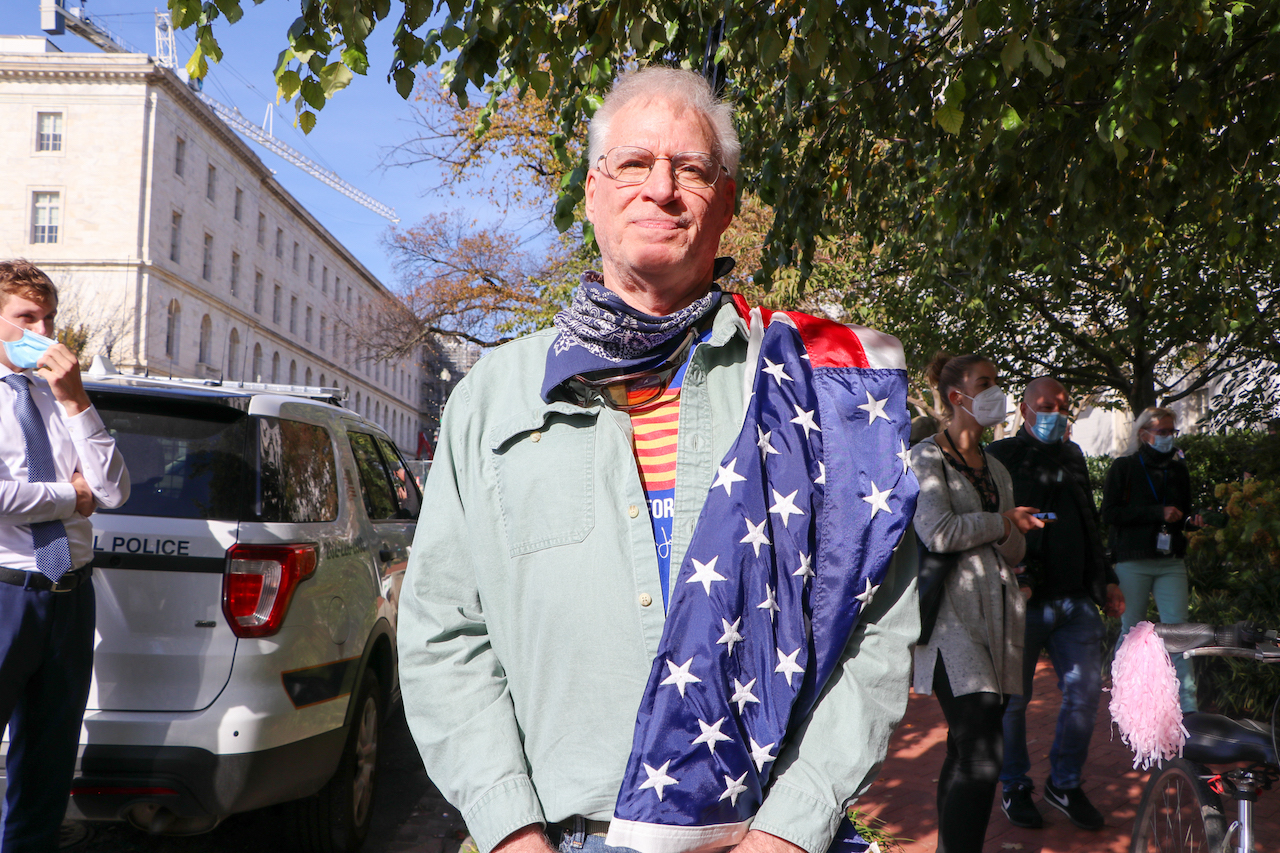 “The Republican party, which is being robbed, needs to stop being so spineless and stand up for basic American principles. I am a Republican by the way and I am criticizing my own party.”

Mark Bryfogle said Republican leaders should stop being “so spineless and stand up for basic American principles” so that election officials stop counting.

“What frustrates me most about my own party is that too many of them are Mitt Romneys. They can’t wait to roll over for the Democrats and accept defeat,” Adol Owen-Williams said. 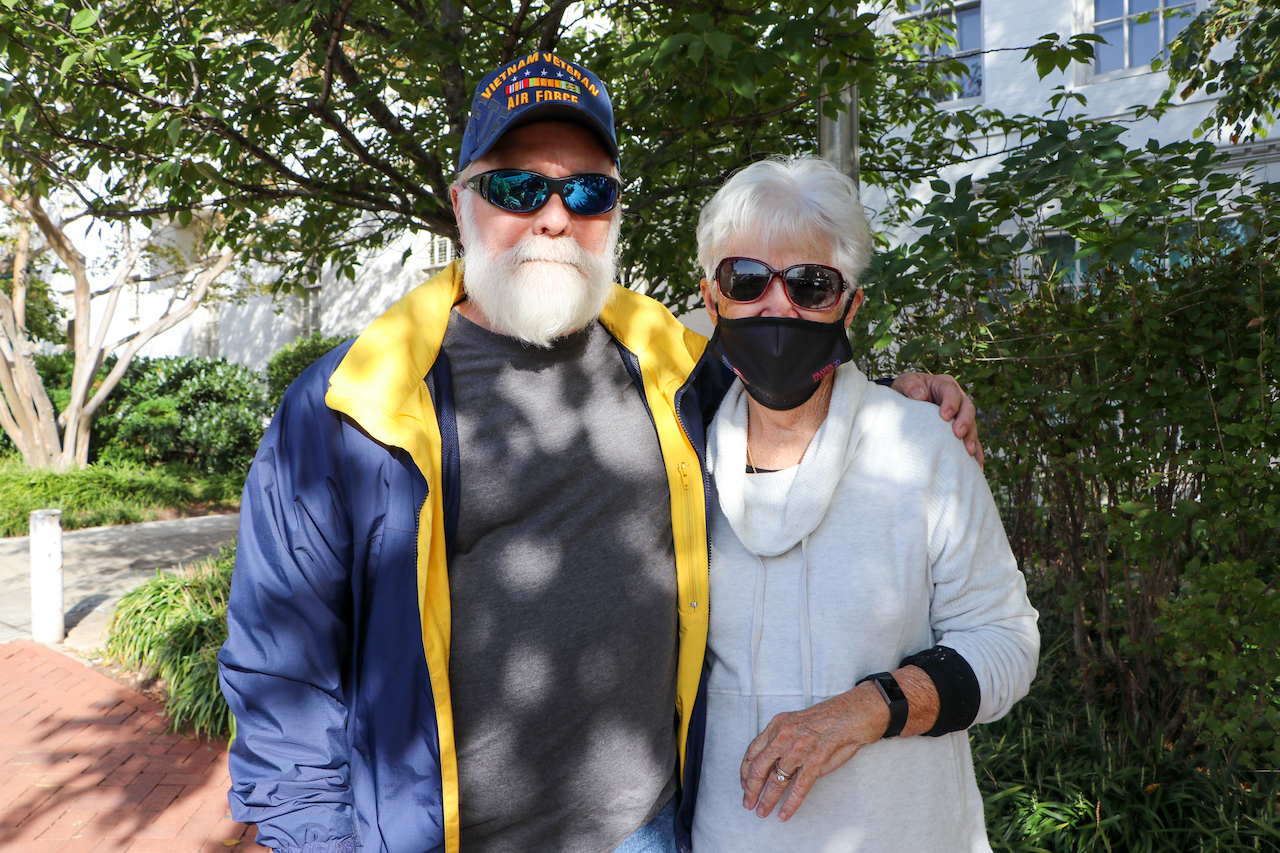 “I think [coronavirus] has been way overhyped. Mail in ballots and absentee ballots should only be sent in if you have valid reason [coronavirus is not a valid reason]. I know Trump said that he wanted everybody to vote in person and numbers aren’t adding up. They should take the number of ballots they say they’ve counted, look at the population, and see how many people are registered to vote. When you compare the numbers, I think you’re gonna see a lot more people voting than was eligible.”

John Taylor, a 72-year-old from Florida, said the fact that Trump was winning until numbers went up for Biden in a span of a few hours, meaning thousands of ballots were cast for Biden in that timeframe, is “a statistical improbability.”

Bryfogle said voting should have to be done in person so an ID is checked.

Mail-in ballots are showing up without postmarks and without the proper signatures, he said. “Once a box of ballots comes in, maybe they’re legitimate, maybe they’re not, they’re in the door,” Bryfogle said.

Though Fortier doesn’t see evidence that mail-in ballots are coming from nefarious places, he said election officials should provide a clear understanding of where ballots came from.

He suspects things could look very different once the initial counting is over. If the result is clear enough, he said, people will ultimately accept the results.