As pandemic magnifies inequities for English learners, educators try not to leave them behind 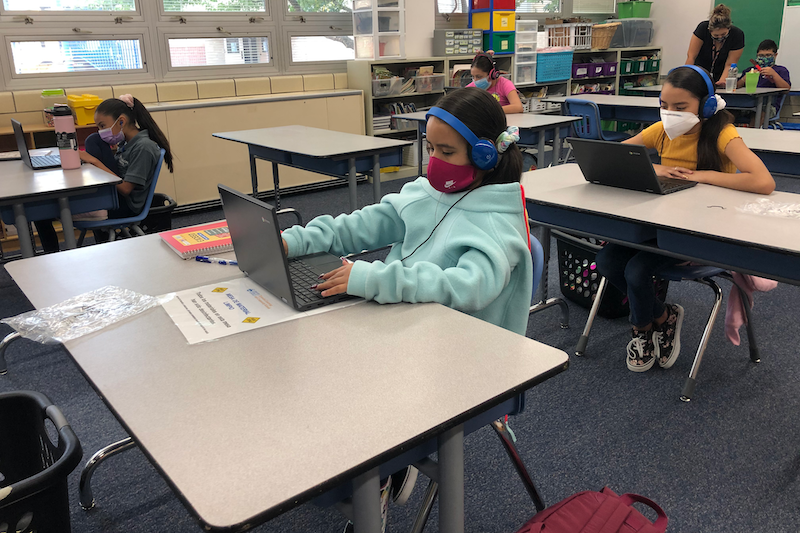 WASHINGTON — Educators nationwide who have been forced to teach online because of the pandemic are finding new ways to connect with students learning English for the first time, a group that’s particularly difficult to reach with online instruction.

Virtual learning has been challenging for students across the U.S., but English learners have faced unique setbacks during the more than five months without opportunities to practice their English-language skills in a classroom with peers and teachers.

About 5 million English learners were stuck at home after coronavirus shuttered schools nationwide in March, according to a September report by the Migration Policy Institute, a think tank that favors liberal immigration policies. The English learner population, accounting for 10% of school-aged children, has grown by more than 1 million students over the last 20 years, the report found. 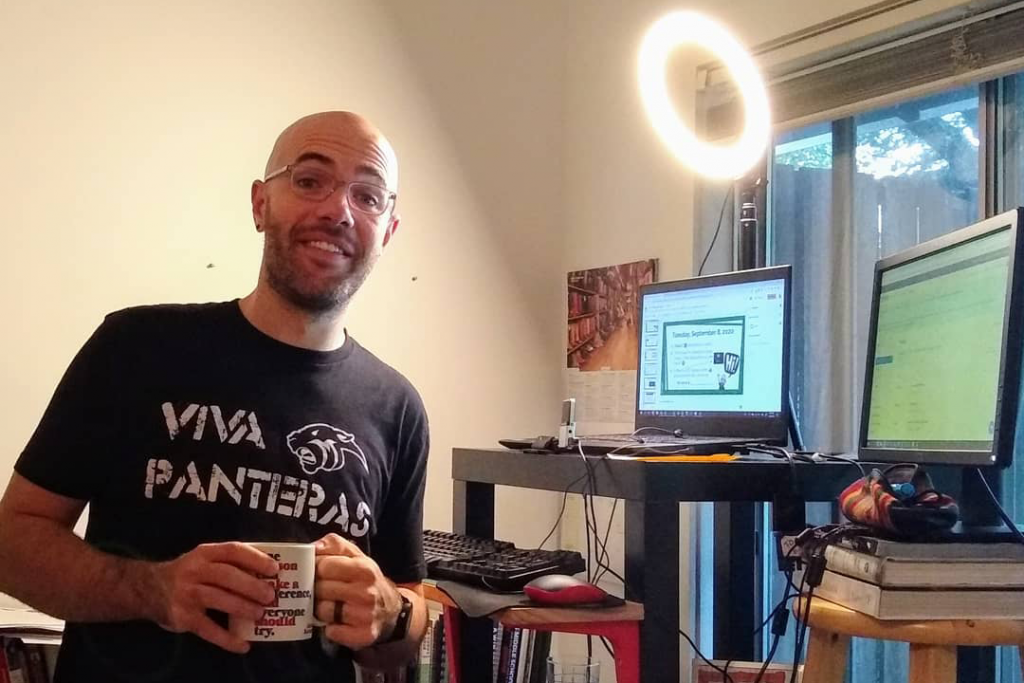 Chris Hague, English-language teacher at Austin International High School in Texas, a school that serves recent immigrants, heard from students who didn’t have time to complete their schoolwork because they were working at restaurants, supermarkets, construction sites or gas stations. While that might interfere with their language development, he’s most concerned about their social and emotional well-being.

When Hague asked students their feelings about the new school year, some expressed disdain for the online format and wished they could go back to school, while others were excited to see friends and learn virtually.

“I feel that this year has been a bit difficult, but little by little we go forward,” one of his students told him in an online discussion.

The teacher encourages students to communicate however they feel comfortable, whether through messages, speaking in class, pre-recorded videos or discussion board comments. Hague teaches using hand gestures, visuals, annotations and sentence frames that students fill in to express themselves.

“I wasn’t sure what our participation would be like, initially, but a lot of kids came back and they were like, ‘I’m ready to go back to school. I want to see my friends. I want to see my teachers.’ So they were ready for that social interaction,” he said.

Despite worrying about doing virtual learning right, Hague felt uplifted when he received an email from a student in the first week of classes on Sept. 10. “hello Mr: I love this school IHS and teachers thenk you for everything,” it said.

Civil rights laws require that English learners “participate meaningfully and equally in educational programs,” while the school engages with parents in a language they can understand.

Even before remote learning, some schools failed to meet these criteria. A 2016 Education Department report noted that over 32 states have a shortage of teachers certified to work with English learners. Now those inequalities have been magnified.

Melissa Lazarín, senior policy adviser at the Migration Policy Institute, said English learner attendance dropped to less than half for several districts when they went virtual, while quality of instruction suffered at others.

With poor quality distance learning, students could lose seven to 11 months of learning. Students who don’t attend could be around 14 months behind. The effect of online instruction on English learners is yet to be seen, but vocabulary setbacks they experienced during the summer may be an indication of what’s to come.

“Districts and states are having to make tough choices because they’re not getting the funding they need to adequately respond to this pandemic,” she said. “The hope is that it’s not staff who are working with this population that will be cut first.”

Parents of English learners often lack the ability to help their children, Lazarín said. About 19.8 million immigrants are essential workers, making up 36% of essential workers in the U.S., according to the Center for Migration Studies, a New York think tank that advocates for pro-immigrant policies. 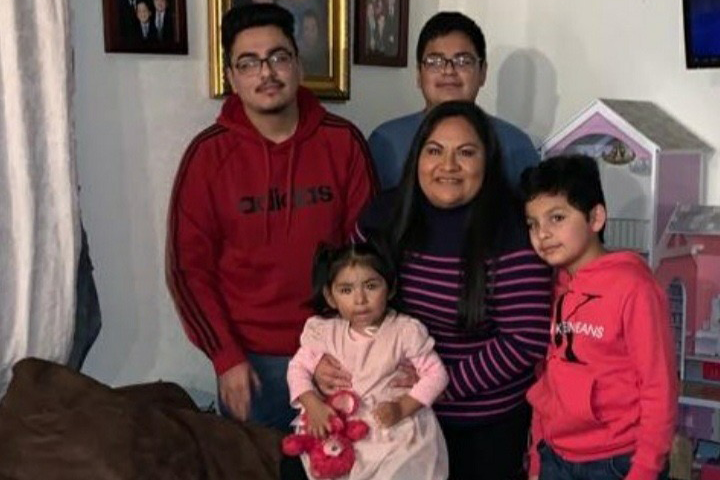 Salome Romero, a 39-year-old from Fresno, California, quit her temporary agricultural job so she could assist her four children with online schooling. “I had to stop something in order to take care of them and give them the attention they need,” she said.

She emigrated from Puebla, Mexico so her children could have access to better opportunities. But she’s found their learning isn’t what it used to be, which is reflected in their test scores.

Parents of English learners in her district complained in an August lawsuit that they weren’t being meaningfully communicated to. But Romero said the district has provided resources to parents who don’t speak English. “No one could have known how to prepare for this situation, but [the district is] doing really well,” she said.

Parent workshops are held in Spanish, Hmong and Mixteco. Teaching tools like Immersive Reader and tutor.com are available in multiple languages. Romero likes using Microsoft Teams to communicate with teachers because it translates messages.

Rich Polio, director of English learning at Fairfax County Public Schools in Northern Virginia, set up learning pods in 37 schools, where children of essential workers can be supervised during classes.

Before distributing devices to students, the district mailed learning materials in English and Spanish, their most common second language.

They now connect with families using TalkingPoints, an app that translates messages in real-time, and a hotline with nine language options.

Polio worries about the achievement gaps his English learners face, but he hopes after school tutoring and lenient grading will help.

“There’s been a rude awakening of teachers as to the bitter reality that a lot of the students have to navigate in order to get their work done,” said Sergio Chavez, English-language development director at Santa Ana School District. English learners in low-income families are especially vulnerable to learning loss, he said. Living with multiple family members in a confined space makes it difficult for them to complete schoolwork. 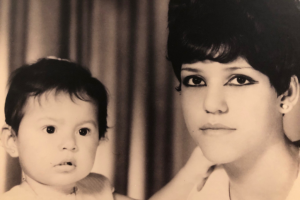 Lydia Stephens (left) knows the challenges of English learning. Her family immigrated to Los Angeles when she was a young girl, and she never left. (Photo: Lydia Stephens)

Lydia Stephens, director of multilingual education at Los Angeles School District, experienced the achievement gap when she was an English learner.

Born to Spanish-speaking parents, Stephens began taking English-language classes in kindergarten and has remained in the district ever since.

She’s worked to narrow the gap by providing services like counseling to newcomers. That’s become especially important in the pandemic, when less than half of the district’s English learners attend classes.

“The biggest thing is always valuing the assets a child brings from home,” she said. “Let them tell us their story, their narrative and we celebrate it, support it.”

Tim Boals, director of WIDA, a multilingual education network, said English learners disproportionately face challenges. In addition to learning a new language, which takes three to seven years for fluency, they have to keep up with classes other students are taking. 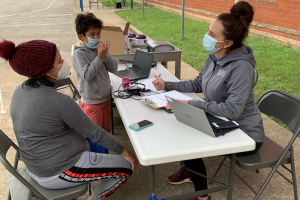 Molly Hegwood, director of English learning at Nashville Public Schools, knew it would be difficult for Spanish, Arabic, Kurdish, Somali and Swahili speakers to learn virtually when they’re accustomed to individualized classroom support. She set up multilingual technology support to address those communication barriers.

Families with technology issues can call a hotline where they’re instantly connected with an interpreter. Or they can visit one of six help sites across the district, open daily from morning to afternoon.

Some educators have worked on making English learners feel comfortable in an online setting.

At Young Scholars, a Philadelphia middle school, English learners often leave their cameras and microphones off, said Chief Academic Officer Desiree Garcia. Small group sessions have allowed teachers to give students the personal attention they need to gradually start communicating. ClassDojo, a learning platform where students can communicate in 35 languages, has also helped.

“Teachers really have to think about the cultural differences that are apparent in different households,” she said. “We have to be mindful of and recognize that everybody’s life looks different.” 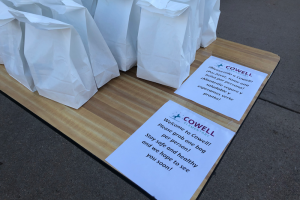 More than a third of Denver public school students are English learners. At the end of March, while students were on extended spring break, the district focused on supporting families with basic needs like distributing meals to food-insecure households, conveying COVID-19 information in eight languages and ensuring students had technology access. Now they’re starting to bring students back to the classroom.

Nadia Madan, executive director of English-language acquisition at Denver Public Schools, said lockdown orders triggered fears in their refugee community. “There were cultural bridges that we had to navigate around, telling them you’re staying home for your safety, but you’re not going to get arrested if you walk outside your house,” she said. 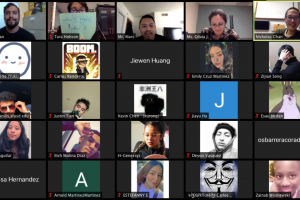 Tara Hobson, principal at San Francisco International High School, a predominantly English learner school, has focused on helping students adjust to being newcomers in the U.S. during the pandemic, often after fleeing war and persecution.

As the economic crisis forces some of her students out of their homes, they’re again becoming displaced. Some moved out of San Francisco, finding the living costs too high, while others became homeless.

About 30% of her students are at risk of dropping out of school. The school has an advisory system where teachers regularly check in with students and provide support, whether through fundraising or partnering with local nonprofits.

“We’re trying to do the best we can to still continue to try and build community,” Hobson said.