For some nonvoters with felony convictions, it’s not the law that prevents them from voting, it’s misinformation

GLEN BURNIE, Md. — Even with his mask on, it’s easy to tell that Richard Worthington is smiling. The deep creases near his eyes reveal a man beaming with gratitude, and he has good reason to be grateful.

Worthington, a 55-year-old former felon, prefers the label “contributing-to-society felon.” He has a stable job at Walmart, health insurance, a safe home and food in his fridge. And he’s celebrating five years of sobriety.

“I’m a productive member of society, I’m a good person and I am a great father,” Worthington said, stifling a laugh that hints he is still a bit uncomfortable with such positive affirmations.

But, when conversation shifts to the 2020 presidential election, Worthington’s grin fades as he contemplates a part of society in which he doesn’t participate. Because of confusion around felony disenfranchisement laws, Worthington didn’t vote this year – or any year prior.

In an election that saw record-breaking voter turnout, with 80 million Americans casting their votes for President-elect Joe Biden and 74 million Americans voting for President Donald Trump, nonvoters like Worthington didn’t go to the polls – 81% by choice, according to a Medill School of Journalism/NPR/Ipsos survey. Or, in Worthington’s case, because he didn’t know he could.

“With someone coming out of prison, they’re really focused on just trying to get their life back together,” said Tova Wang, an elections expert and visiting fellow at the Harvard Kennedy School. “There are a lot of people who believe their voting rights have been taken away, when in many states they haven’t. And the criminal justice system does not do a good job of informing people of that.”

Richard Worthington talks about overcoming addiction and turning his life around. (Madison Muller/MNS)

Within the last decade, most states have amended their laws to favor reinstating voting rights for felons, or to make the process easier. But, according to the ACLU, confusion and misapplication of these laws continue to de facto disenfranchise countless Americans like Worthington.

In 1983, at 18, he was arrested and convicted of felony possession and sale of cocaine in California. Worthington was released from prison after a few months, but was then charged in Texas with another felony for possession of a prohibited firearm. That sentence lasted over three years, rendering him ineligible to vote in the 1984 election. It would have been his first chance to vote.

That missed opportunity sealed his fate as a nonvoter.

Every election year since his release, Worthington incorrectly thought that he was ineligible to vote without first petitioning his state’s governor. He was never given information about what the voting restoration process looked like or how to access it.

For Worthington, who dropped out of high school in ninth grade, insecurity about his writing ability prevented him from pursuing such a petition. Despite earning his GED, Worthington said this aversion to writing has made many things, such as job applications, unnecessarily difficult.

Education level is a barrier for many nonvoters. The Medill School of Journalism/NPR/Ipsos survey of 1,103 nonvoters and 740 voters suggests that there is correlation with higher education and income levels and perceived ease of voting. Those in the highest income and educational brackets are the most likely to believe that voting is easy.

Plus, Worthington, who was one of those surveyed, spent nearly 20 years bouncing from state to state, working odd jobs and evading responsibility. His interactions with the legal system left him feeling powerless and getting high felt more urgent than voting on who was in office. Washington felt too far removed, a sentiment shared by nearly 50% of nonvoters who participated in the Medill School of Journalism/NPR/Ipsos survey conducted shortly after the election.

Worthington says he first experimented with drugs on his 10th birthday. (Madison Muller/MNS)

A trip to Maryland to visit his niece in 2014 made Worthington rethink his lifestyle. He grew up in a large family and values its importance so he did not want to bring addiction into his niece’s home. Worthington, hesitantly, attended a local 12-step meeting. And he kept going back.

With the support of his sponsor, he stayed sober, and he stayed in Maryland. Sobriety led to full-time employment at Walmart. He has now been working there for three years and was recently promoted.

“Every day that I come to work is a success,” Worthington said. “When I was doing drugs I never had my bills paid, I didn’t know what I was going to do from one day to the next. Now, I know I’m going to go to work, or I’m going to have the day off and watch TV.”

His sobriety and stable income have helped him to reconnect with his daughter, Princella, who lives in California and has three children of her own. Instead of using his money to buy drugs, he buys birthday presents, most recently when Princella turned 30.

Worthington’s phone background is a photo of his daughter, Princella. He said he has gotten closer with her in recent years, but because she lives in California, he doesn’t see her as much as he’d like. (Madison Muller/MNS)

The onset of the Covid-19 pandemic in March changed his job dramatically. He did not like telling people to wear masks when he didn’t know how effective they were himself. As co-workers called in sick more frequently, Worthington struggled with the pressure of an understaffed workplace.

Conflicting information from the Trump administration and what seemed like lack of transparency around infection rates was frustrating. Worthington felt he could not trust what the media was reporting about the virus either.

Over 50% of nonvoters agreed with the statement, “it makes no difference who is elected president – things go on just as they did before.” But Worthington felt differently, understanding the direct connection between Covid-19 relief and the 2020 election.

Worthington wanted his grievances to be considered and counted. But he didn’t know that they could be.

In the state of Maryland, lifetime bans on voting for those with a past felony conviction were overturned in 2007. And in 2016, a year after Worthington relocated there, the state granted felons who had completed their sentences an immediate restoration of voting rights.

“I’m not a dumb person, I’m pretty intelligent. I just need to know how to access information to get the ball rolling.” 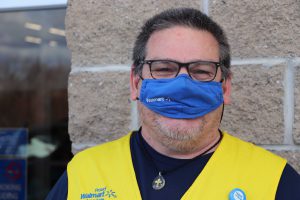 Worthington loves working at Walmart. “I met a guy just talking to him as he walked in and out the door, where now he’s come over to my house, we’ve kicked back and he even gave me a TV!” he said. (Madison Muller/MNS)

While 75% of nonvoters feel voting in this country is easy, a felony conviction can make it much more difficult to navigate the process.

Only 11 U.S. states actually disenfranchise beyond sentence completion, but inaccessibility to information regarding state-specific eligibility is a major factor for those who are able to vote, and do not know it.

“There are thousands, if not millions, of people that are eligible to vote, but because of systemic barriers, think they can’t, or won’t,” said Kimberley Haven, director of Forward Justice Maryland. Haven is the only formerly incarcerated person to have written several pieces of passed legislation regarding felons’ rights at both the city and state levels.

“The system is set up to continue the collateral consequences of disenfranchisement,” Haven said. “Despite positive changes in legislation, nobody has the onus of informing (formerly incarcerated) people that they are eligible to vote. The Board of Elections does not believe that it is their responsibility, corrections departments do not believe it is their responsibility. There are multiple points within the system where people could be educated about their voting rights, but nobody takes on that onus.”

But now that Worthington knows he can vote in 2024, he doesn’t know if he will.

“I’ve felt overlooked for so many years,” Worthington said. “Politics aren’t super important to me because my felony conviction has made it so that I haven’t ever been able to make a change.”

Karli Goldenberg contributed to this story.