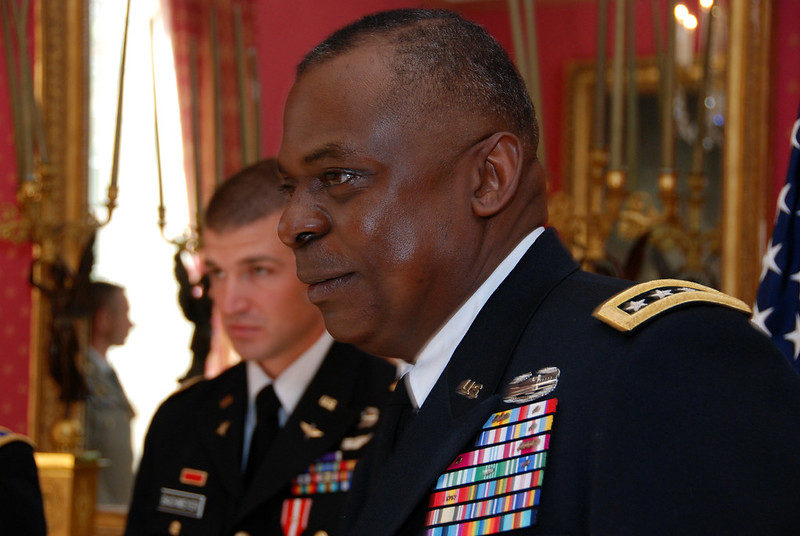 Defense Secretary Lloyd Austin at the French Embassy in the U.S. when he was Vice Chief of Staff of the U.S. Army in 2012. (Creative Commons)

WASHINGTON — Jason Smedley remembers the pain of his 2000 attack by lower-ranking Marines during a training exercise he led as a lance corporal at the Marine Corps Base Camp Pendleton’s School of Infantry. While some held Smedley, the others beat him, knocking out many of his teeth.

“They just didn’t like taking orders from a Black guy,” Smedley said. As punishment, the group was barred from going out that weekend.

Unable to speak after enduring multiple dental surgeries, Smedley fell behind in the training and almost had to start over. At his breaking point, Smedley planned to leave the Marine Corps, until a Major convinced him to stay and ensured he would graduate with his group.

Smedley, who grew up in Little Rock Arkansas, graduated at the top of his class and has been serving in the Marine Corps for over 20 years. He’s been deployed to Senegal, Estonia, Iraq and Jordan. Having achieved the rank of major, Smedley now is a logistics officer in Hawaii.

With Lloyd Austin confirmed as the first Black defense secretary, Smedley is hoping discrimination issues will be better addressed in the future. Austin has pledged to rid the military of “racists and extremists.” A recent Military Times poll found that more than one-third of active-duty troops reported witnessing signs of white supremacist or racist ideology in their ranks. Austin experienced firsthand the dangers of racist groups in the military. In 1995, when he was a lieutenant colonel with the 82nd Airborne Division at Fort Bragg, North Carolina, three white skinhead soldiers in the division murdered a Black couple as they walked along a Fayetteville street.

“We also owe our people a working environment free of discrimination, hate and harassment,” Austin said during his Senate confirmation hearing. “The job of the Department of Defense is to keep America safe from our enemies. But we can’t do that if some of those enemies lie within our own ranks.”

Austin has also promised to improve diversity within the military. While 17% of the military is Black, the percentage of Blacks in senior ranks is lower.

Like Smedley, many Black military service members have been targeted because of their race.

According to a 2017 Defense Department survey whose results were released in January, nearly a third of Black military service members reported experiencing racial discrimination, harassment or both during a one-year time span. Black service members were also as much as two times more likely than their white counterparts to face discipline, according to a 2017 study by Protect Our Defenders, a national organization advocating for sexual assault victims in the military.

Lt. Col. Patricia Jackson-Kelley, president of the National Association of Black Military Women, joined the military at age 36 as a captain at Travis Air Force Base in California. As the only Black person in her unit, Jackson-Kelley said she was excluded from meetings and social gatherings. She also said the head nurse intended to give her a lower mark on her performance evaluation because of her race, but the chief nurse stopped her.

Jackson-Kelley said she was afraid to report the discrimination because of the effect it could have had on her career. She said the appointment of Austin is “very promising” because he can ensure that high-ranking officers will not tolerate discriminatory actions and will hold the perpetrators accountable.

“They need to take a strong stance against allowing white supremacy to exist within their ranks, but that has to come down from the highest levels of command, and we believe that Secretary Austin will do that,” said Lecia Brooks, chief of staff at the Southern Poverty Law Center, a legal advocacy organization specializing in racial injustice.

Brooks said abolishing discrimination starts with the recruitment process. Military recruits should be screened and vetted adequately to ensure they don’t possess racist ideologies that threaten the safety of Black military service members. Signs of such beliefs can be found in their social media accounts, tattoos or interview responses. But recruiters need to be trained to recognize these signs, she said.

Smedley said the military also needs to appreciate and utilize the diversity in its ranks rather than forcing minorities to assimilate for the appearance of unity. Marine leaders also need to ensure that minorities have support systems, Smedley said.

“There needs to be more of an effort to understand various cultures, build those relationships and communities and make a sincere effort to recruit diversity and show value to minorities,” he said.