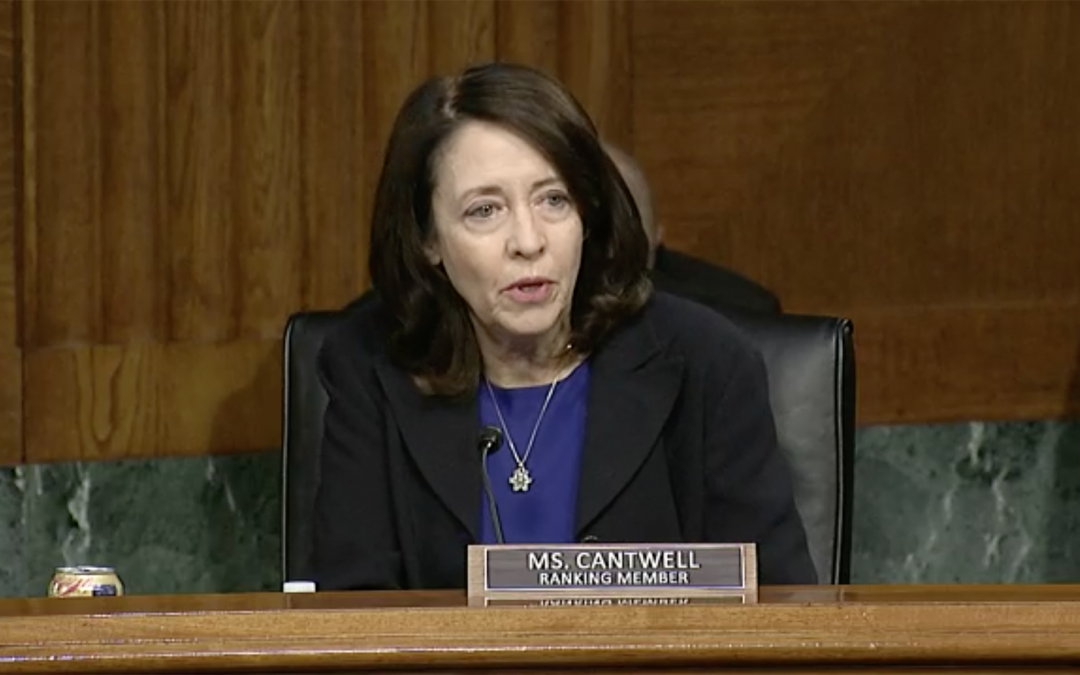 WASHINGTON – Sen. Maria Cantwell made history Thursday when she became the first woman to lead the Senate Committee on Commerce, Science and Transportation.

Cantwell is the first Washington senator to serve as the chairperson of the pivotal committee since Sen. Warren Magnuson performed the role for 22 years starting in 1955.

“I may be the first woman [chair] of this committee, but I can tell you this, I don’t plan on being the last one,” Cantwell said when the committee met Thursday. She gained the chairmanship as a result of Democrats becoming the majority party in the Senate.

The 28-member committee, now with a record 10 women members, has jurisdiction over all interstate commerce and several policy areas that are especially relevant to Washington, including aviation, fisheries management and technology regulation. It also will decide on a new $26 billion transportation package proposed by House Democrats and COVID-19 response bills.

During her opening remarks, Cantwell previewed the three priorities of her agenda – COVID-19 relief, planning for the rising importance of technology and the internet, and addressing economic disparities. Along with her own agenda, the chairwoman also will be expected to work with President Joe Biden on his Build Back Better infrastructure plan, which has goals like universal broadband and sustainable transportation that fall squarely under the committee’s jurisdiction.

While she mainly focused on her proposals for the entire country, Cantwell mentioned some issues specific to her home state, most notably saying that she will inquire about the recent controversy involving at least 40 hospitals across Washington that may have been supplied fake N95 masks since December. She said she planned to send a letter to the Federal Trade Commission asking the agency to investigate the masks.

After the ceremonial passing of the gavel, Cant- well and former chairman Sen. Roger Wicker, R-Miss., now the top Republican on the committee, told senators that they will be expected to work across the aisle to get essential work done.

“Given this committee’s record of bipartisan accomplishments, I believe that the Commerce committee is the best committee to carry out the nation’s business in a 50-50 Senate,” Wicker said. The committee was able to get Senate approval of more than 60 bills during the previous Congress.

With the hearing happening in midst of a largely partisan impeachment process, Cantwell looked to the past, especially Magnuson, as a role model for bipartisanship and productivity. The chairwoman recalled a chat she had over coffee decades ago with Magnuson, who died in 1989, and the late Sen. Daniel Inouye of Hawaii.

“The most important thing about, I think, that day, and those two individuals who some of us actually got to know, is that this committee can operate in a collegial fashion,” said Cantwell. “We can get important work done for the people of the United States.”

Cantwell also will look to break historical norms. She expressed her desire to use her historic leadership role to explore strategies to help women in the workforce, particularly in the science, technology, engineering and math fields, and other disparities that plague the economy.

Sen. Amy Klobuchar, D-Minn., expressed her faith in the new committee leadership to excel in their role.

“We are very excited about the way you and Sen. Wicker work together and all the work we’ll do,” Klobuchar said. “We can feel your enthusiasm and we share it.”