ALEXANDRIA, (Va.) — Virginia gubernatorial candidate Terry McAuliffe (D) on Tuesday underscored his support for mandating COVID-19 vaccines in schools once fully approved by the FDA, telling reporters at a campaign stop in Alexandria that “we have to keep our children safe.”

“We cannot go back to a place where our schools are closed down, so if the CDC says the vaccines are safe for children, then I want everybody to get vaccinated,” he said following the educational roundtable at Charles Houston Recreation Center.

“I think COVID has really highlighted many of the inequities that we have that we’ve got to deal with,” McAuliffe said. “I talk about raising teacher pay, it’s probably one of the biggest initiatives. We rank 50th out of 50 states when you take average teacher pay compared to the average pay of our residents. We’re the 10th wealthiest state in the United States of America, we should never be 50th in any category.” 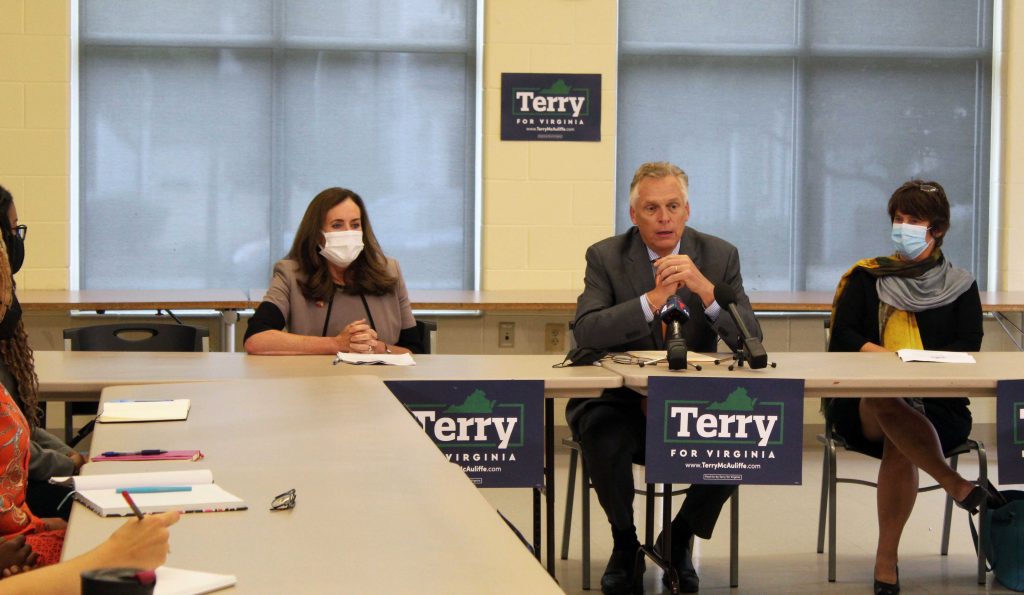 McAuliffe is in a tight race against Republican` Glenn Youngkin, with recent polls showing the Democrat ahead by an average of 3.5 points.

The former governor told the roundtable that “everybody should get an early childhood education” and have access to WiFi.

According to the State Council of Higher Education for Virginia, one in five students from kindergarten through college lack either high-speed internet or a computer in the home. Of the K-12 students in Virginia, over 200,000 (14%) lack broadband subscriptions and 173,000 (12%) do not have a computer in their home.

“It’s just not fair,” McAuliffe said. “Some children have to go to McDonald’s to get on a Wifi hotspot, really?”

Holton said that getting parents up to speed with technology and expanding broadband access was a major challenge at the beginning of the pandemic, but that the state has made “huge progress” since then.

“When it started, were we where we needed to be? No. Not only getting broadband, but getting the Chromebooks, the other devices out to families,” she told Medill News Service. “But lots of school divisions were doing things like going on the road even, and helping folks address the IT issues even in their home.” 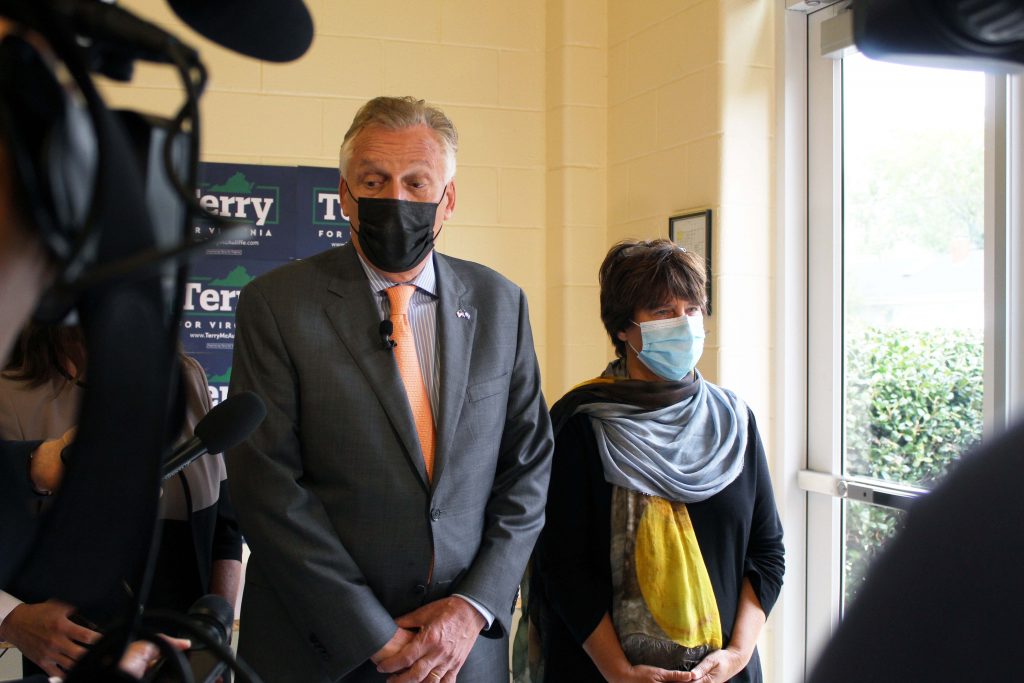 Holton said she expects the resources that were given amid the pandemic to continue, at least for a few years, and longer should President Biden’s Build Back Better Act pass Congress.

“Frankly, one of the Build Back Better pieces that I’m most excited about in terms of its impact on education is the Child Tax Credit, and that is intended to be a permanent benefit that will cut child poverty in half, which will make a huge difference,” she said. “Really the two best things you could do to improve education right now is the Child Tax Credit to cut child poverty in half and pay teachers more, which Governor McAuliffe is going to do.”

McAuliffe on Tuesday tried to contrast his campaign to that of Youngkin, both in terms of supporting more funding for education and COVID protocols in the classroom.

“I’m running against an anti-vaxxer who goes on rightwing radio and says quote, ‘if you don’t want to take it, don’t take it, there are many good reasons not to get vaccinated,’” McAuliffe said. “No there are not.” 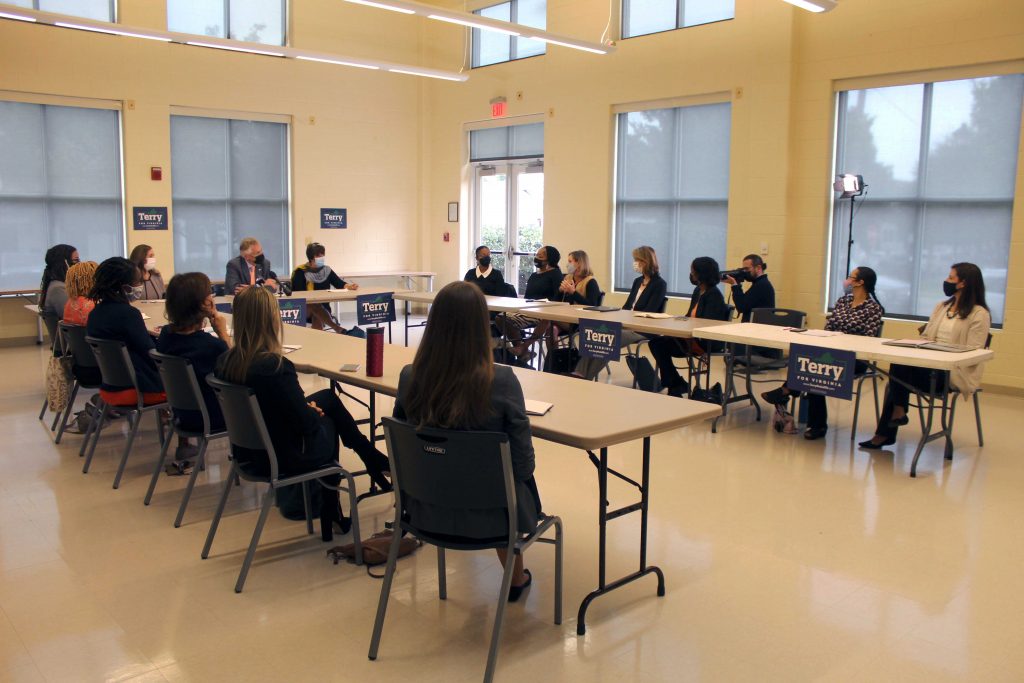 McAuliffe listens to one of the members of the all-women panel, which included parents, teachers and early childhood educators. (Jeannie Kopstein/Medill News Service)

Youngkin has said he believes Virginians should get vaccinated against COVID-19, but has stopped short of supporting mandates.

“I’ve gotten the vaccine; my family has gotten the vaccine. It’s the best way for people to keep themselves safe,” Youngkin said during the second governor’s debate in September. “And I, in fact, have asked everyone in Virginia to please get the vaccine. But I don’t think we should mandate it.”

In contrast to Youngkin, Holton downplayed the significance of mandating an approved COVID vaccine for public school students, saying that the state already mandates “all kinds of vaccines.”

“And that means in the K-12 world, we already have a system for managing religious exemptions and managing the exceptions that are needed for health reasons,” she added.

Holton noted that they should not “get ahead of the science, but once the CDC says it’s right for children, it should just add into the list of what’s already there and safe and appropriate for children.”

McAuliffe’s campaign is ramping up amid early voting, which ends Oct. 30. He will be campaigning alongside first lady Jill Biden on Friday, as well as former President Barack Obama on Oct. 23. The president is also expected to hit the trail.