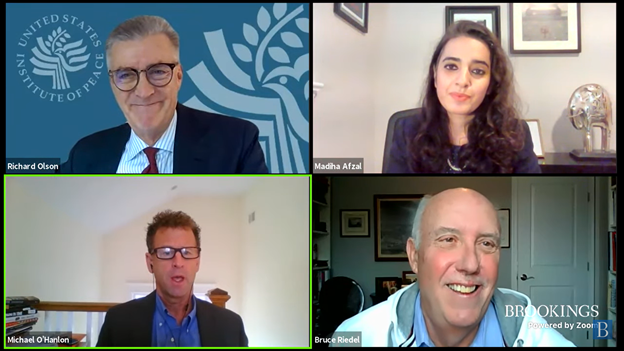 Foreign policy experts, including the former ambassador to Pakistan, discuss the future relationship between the U.S. and Pakistan during a policy discussion on Wednesday. (The Brookings Institution)

WASHINGTON — Twenty years after 9/11, and two months after the American exit from Afghanistan, the United States’ strategic and often tenuous partnership with Pakistan has come full circle.

The military and diplomatic relationship between the two countries “stands at a precipice,” said Madiha Afzal, a Pakistan expert, at a virtual policy discussion held by the Brookings Institution on Wednesday.

For years Washington relied on cooperation from Pakistan in order to fulfill its military mission in Afghanistan, mostly overlooking the sanctuary Pakistan provided the Taliban.

“Now there is less reason to look away,” said Afzal, a fellow in Brookings’ Foreign Policy Program.

Some in the Biden administration hope Pakistan might influence the Taliban to implement inclusive governance, humanitarian rights and counter-terrorism efforts in neighboring Afghanistan.

“Pakistan has had a hedging strategy on Afghanistan for much of the past 20 years. Publicly they were cooperating with the U.S., principally through the provision of ground and air lines of communication. But, clandestinely, they were supporting the Taliban,” said Richard Olson, the former U.S. ambassador to Pakistan.

The country has “positioned itself as an intermediary between the Taliban and the rest of the world including the U.S. Yet its leverage is vastly reduced, while Washington and others will expect Pakistan to deliver,” he added.

Olson said he believes Pakistan is “unlikely to move the Taliban on its core agenda” because of the political volatility across the border in Afghanistan and the rise of the Pakistani Taliban domestically.

The stability of the relationship has regularly been tested — from Pakistan’s harboring of terrorists, most notably Osama bin Laden, and agitation from Pakistanis over U.S. drone strikes in their country.

“Pakistan will continue to play an important role in what happens across the border in Afghanistan,” Shuja Nawaz, the former director of the South Asia Center at the Atlantic Council told Medill News Service. “It can’t escape that reality, because it is tied at the hip to Afghanistan. Economically, politically, culturally it has ancient ties.”

Although jointly linked to Afghanistan, Pakistan’s military and civil government often do not work together internally.

“The left hand doesn’t know what the right hand does,” Benjamin Hopkins, a historian of modern South Asia and the director of the Sigur Center for Asian Studies at George Washington University told Medill News Service. “Sometimes that’s by design, because it creates plausible deniability.”

A major point of contention with Washington has been Pakistan’s intelligence service (ISI) funding and harboring Taliban militants on their border with Afghanistan. For the past 20 years, Pakistani intelligence has allowed insurgents — and their families — to remain inside Pakistan on the border region.

In September, Pakistan became one of the few countries that met with Taliban leaders in Kabul since its takeover. Pakistan has not yet officially recognized the Taliban government in Afghanistan.

Among the other topics discussed on the panel — Pakistan’s nuclear capabilities, domestic politics and relations with its neighbors China and India.

“The key takeaway for the U.S. here is are we going to in some sense attempt to compete with China for Pakistan’s affection,” Olson said. “I think that would be a mistake.”

Instead, the United States will continue to leverage its position as the South Asian country’s largest export market.

One of the next big tests for the strength of the relationship will come this December when Biden hosts a virtual democracy summit. It is unclear whether Pakistan will be included though the prime minister has expressed his interest.

The State Department’s No. 2, Wendy Sherman, illustrated the precarious guardrails of the relationship ahead of her recent trip to Islamabad. “It’s for a very specific and narrow purpose, we don’t see ourselves building a broad relationship with Pakistan,” she said.