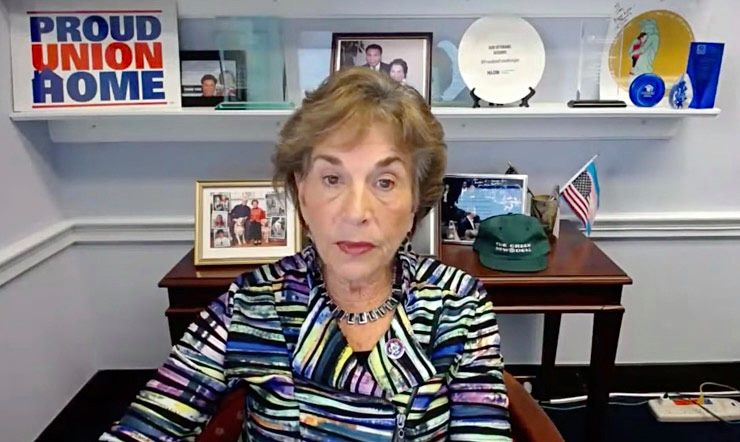 Chairwoman Jan Schakowsky, D-IL., acknowledged the impact of the COVID-19 pandemic on the global supply chain. (House Subcommittee on Consumer Protection and Commerce)

The hearing addressed ten bills designed to improve the U.S.’s global competitiveness, increase supply chain resilience and promote domestic manufacturing. One such bill is the “INFORM Consumers Act,” which aims to require online marketplaces like Amazon to verify the identity of high volume sellers that operate on their platforms. The bill seeks to protect consumers and legitimate businesses, increase marketplace trustability and discourage criminal activity.

This legislation would create a national standard that Rep. Cathy McMorris Rogers, R-Wash., is hesitant to support. One of her primary concerns was the legislation’s $40 billion price tag.

“We need to be focused on solutions that are going to strengthen America’s economy and not just scoring political points with more reckless spending,” McMorris Rogers, the Committee’s Republican leader said. “Spending more money is unsustainable and it’s going to create more problems than it solves.”

Scott Paul, President of the Alliance for American Manufacturing, was a proponent of the legislation, and holds that manufacturing is an important driver of upward mobility for those without degrees from four-year colleges. For this reason, it has a tremendous effect on the wealth of a community.

Scott Lincicome, a Senior Fellow of Economic Studies at the CATO Institute, said that U.S. manufacturing is far more competitive and resilient than is commonly understood.

“Declining manufacturing jobs and the sector’s shrinking share of GDP tell us very little, because these trends reflect long-term global dynamics shared by most industrialized nations,” Lincicome said. “The trends are mainly a standard story of economic development, not reason for serious concern.”

Lincicome warned that there is “no simple cure” for global economic shocks. Rather, Congress should focus on how fast companies adjust to supply shortages.

“By the time Congress decides to intervene in a market, it will look much different than the one on which that decision was based, and it will change again by the time any government-supported production comes online,” Lincicome said.

“Future government action here should focus not on outsmarting the market, or on delivering subsidies to privileged manufacturers and workers, but instead on economic openness, diversification and flexibility,” Lincicome said.