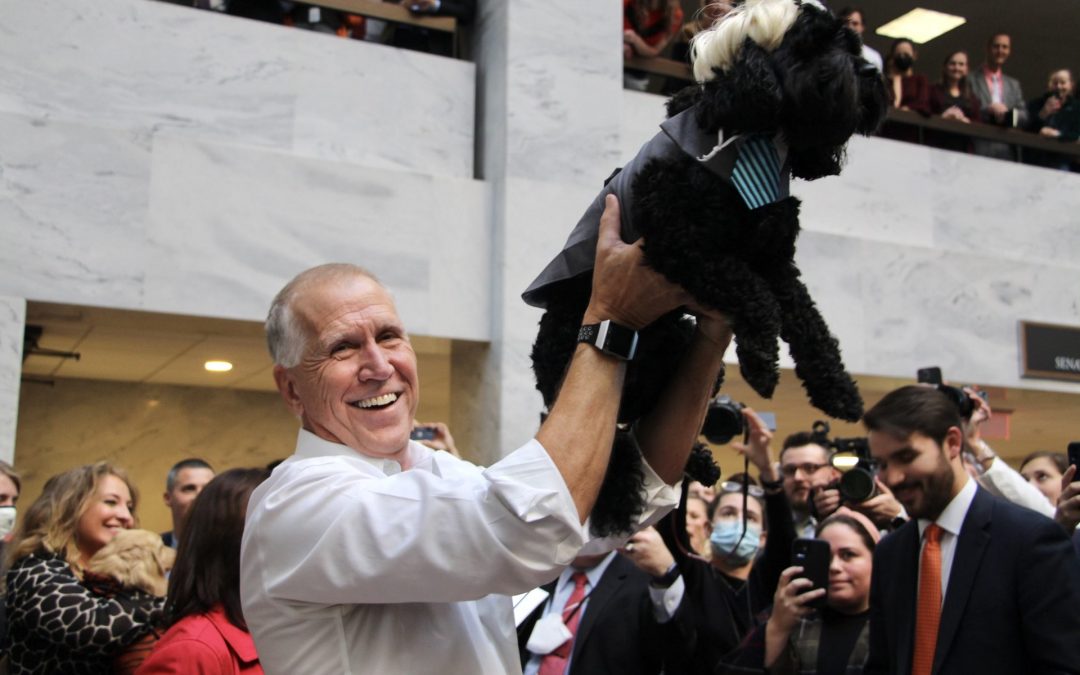 Sen. Thom Tillis, R-N.C., kicks off his annual “bipawtisan” Halloween dog party by introducing the crowd to his dog Mitch, who is dressed as Senate Minority Leader Mitch McConnell, R-Ky. “This is the leader,” Tillis told the partygoers. (Hannah Schoenbaum/Medill News Service)

The pair are Sen. Thom Tillis’, R-North Carolina, dogs — Theo, a 6.5-month old Bernese Mountain Dog-Poodle mix and Mitch, a Cocker Spaniel-Poodle mix who is about 4-years-old. The pups dressed up as Sinema and McConnell respectively for the “bipawtisan” Halloween dog parade in the Senate Hart building.

“I think the thing about this event is we’re just people who are dog lovers — and a few people dressed up as dogs,” Tillis said in remarks to the crowd. “But this is an opportunity to let everybody know that if you love dogs, you’ve got to be a pretty good person.”

“She laughed and said, ‘Of course,’” Tillis said.

Costumed dogs were outnumbered by humans, as staffers filled the floor of the atrium and overflowed onto balconies in hopes of catching a glimpse of the four-legged festivities.

Some pups showed up as other animals: there was a lion, tiger, narwhal and shark. A taco and several hot dogs were also in attendance, as was Paris Hilton, Nancy Paw-losi and Pierre Delecto — Sen. Mitt Romney’s, R-Utah, notorious Twitter alter ego.

Other pups’ costumes employed political messaging: some donned slogans such as “Bark Back Better,” “I Want You to Tax the Rich” and “Tax the Cats” — a parody of Democratic Rep. Alexandria Ocasio-Cortez’s Met Gala dress.

One “bad pet” in prison attire had been charged with eating the budget deal. 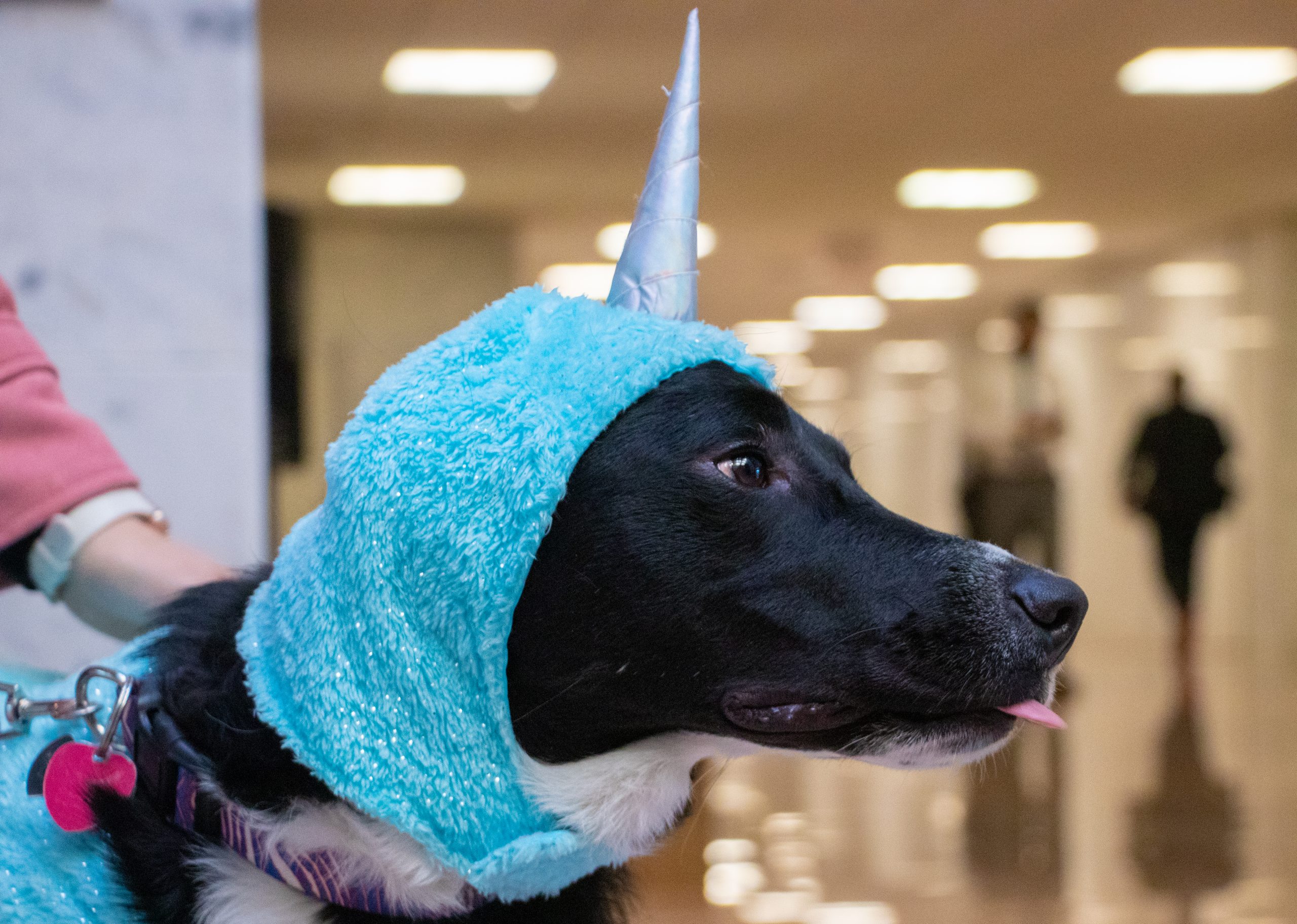 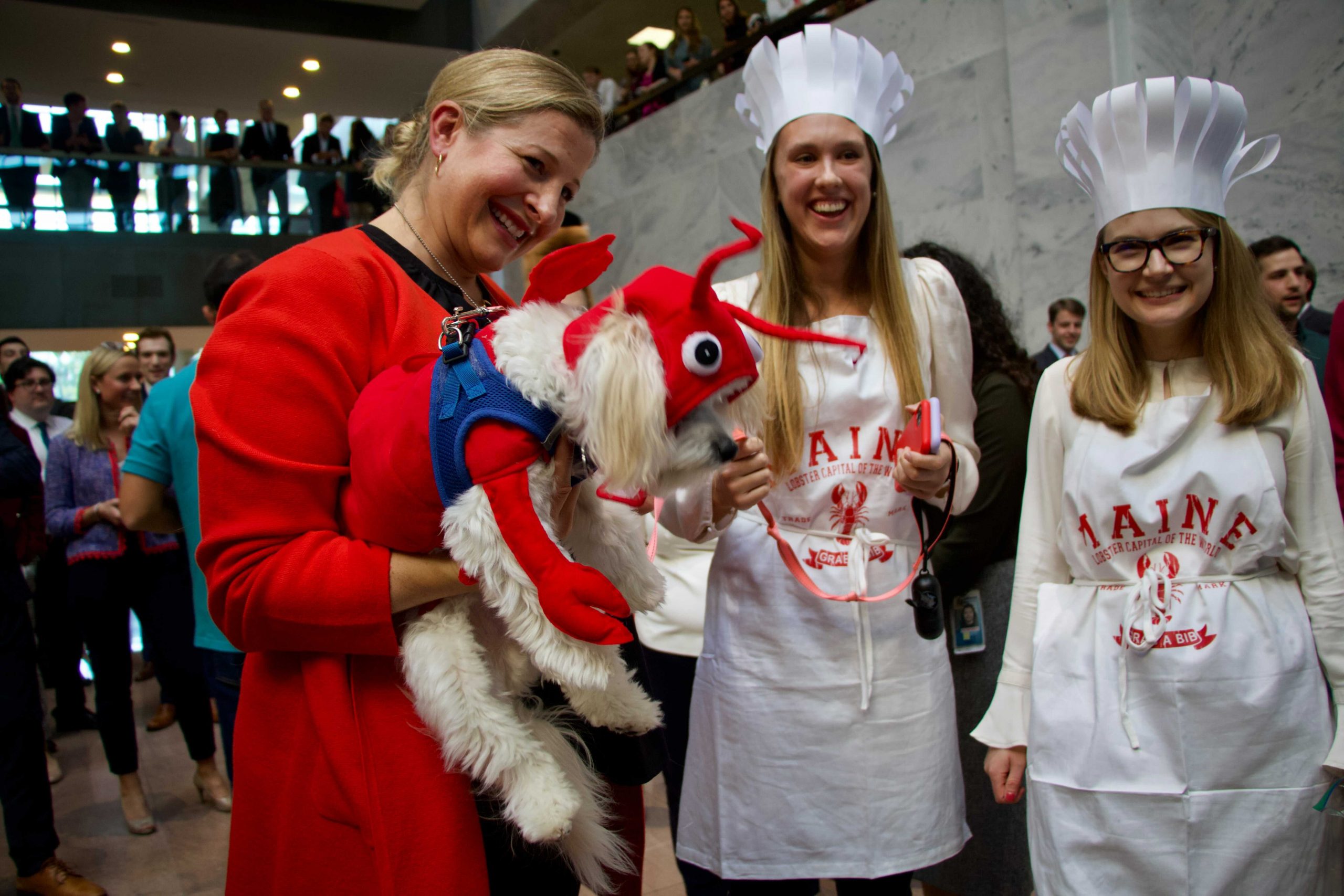 Rep. Chellie Pingree arrives to the Halloween party holding her dog, wearing a lobster-themed group costume with her staffers, in honor of their home state of Maine. (Hannah Schoenbaum/Medill News Service) 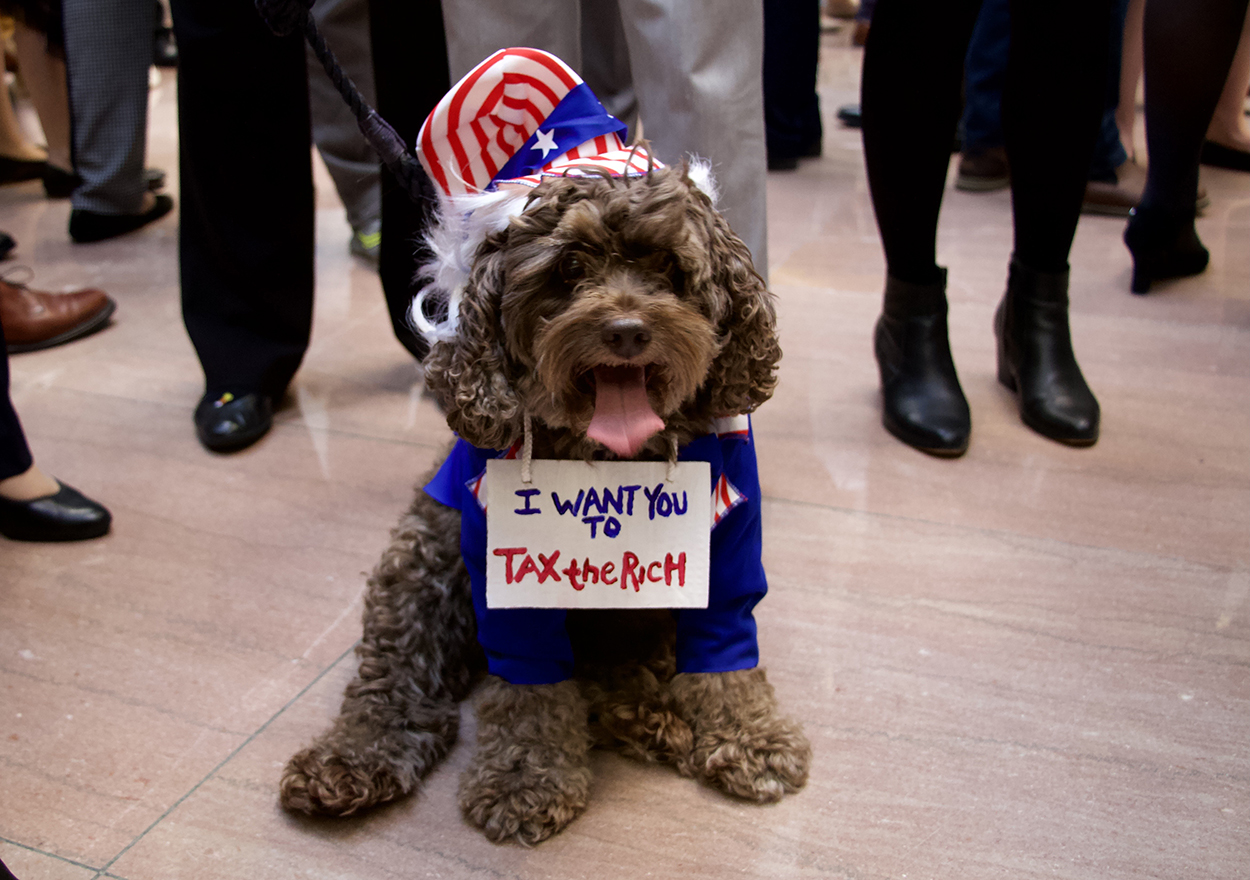 Wally, dressed as Uncle Sam, shows off his placard with the phrase “I want you to tax the rich” at the congressional Halloween dog parade on Oct. 27, 2021. (Hannah Schoenbaum/Medill News Service) 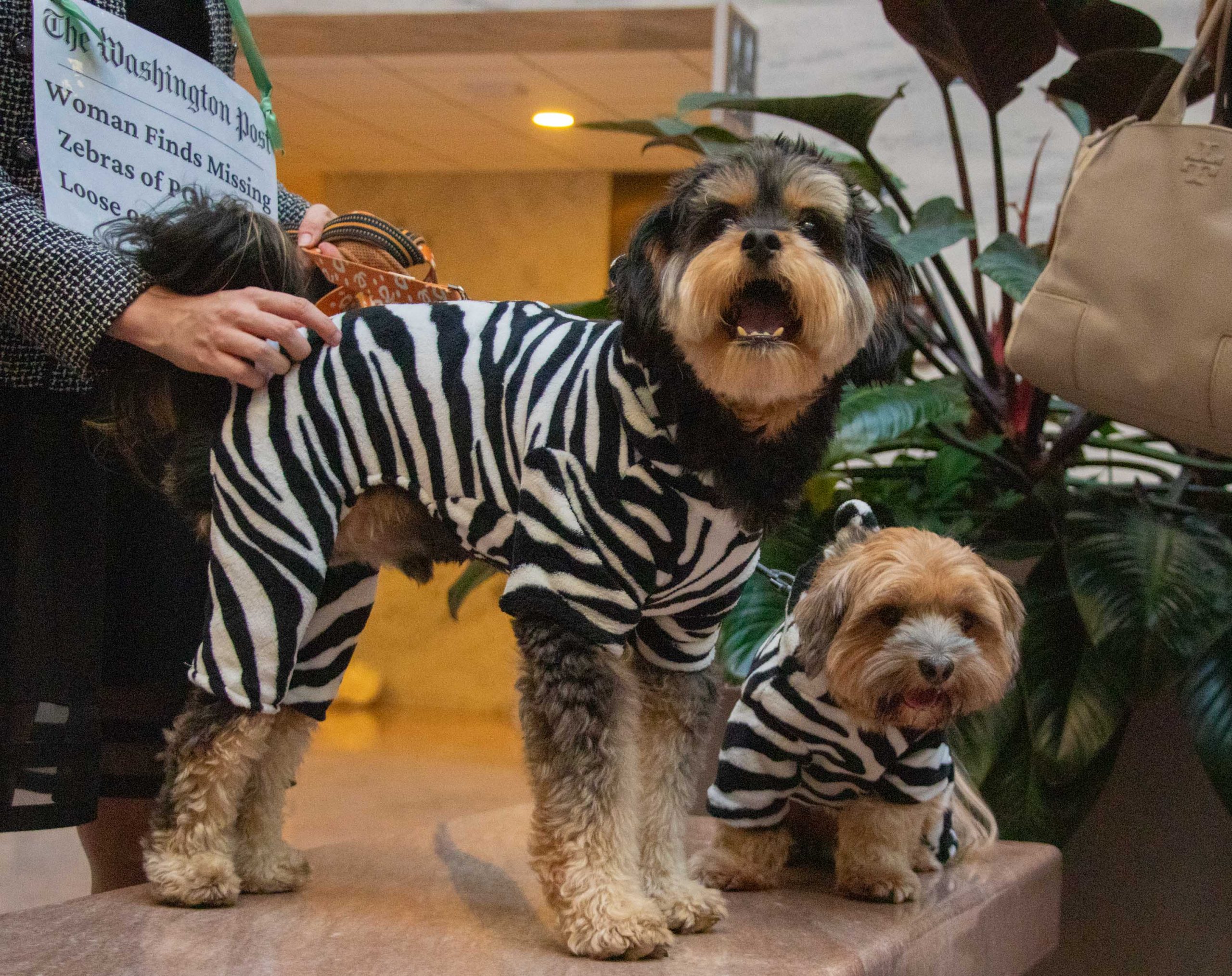 Two dogs were dressed as the zebras who are currently roaming in Maryland, Wednesday inside the Hart Atrium in the Hart Senate Office Building. (Isabel Miller/Medill News Service) 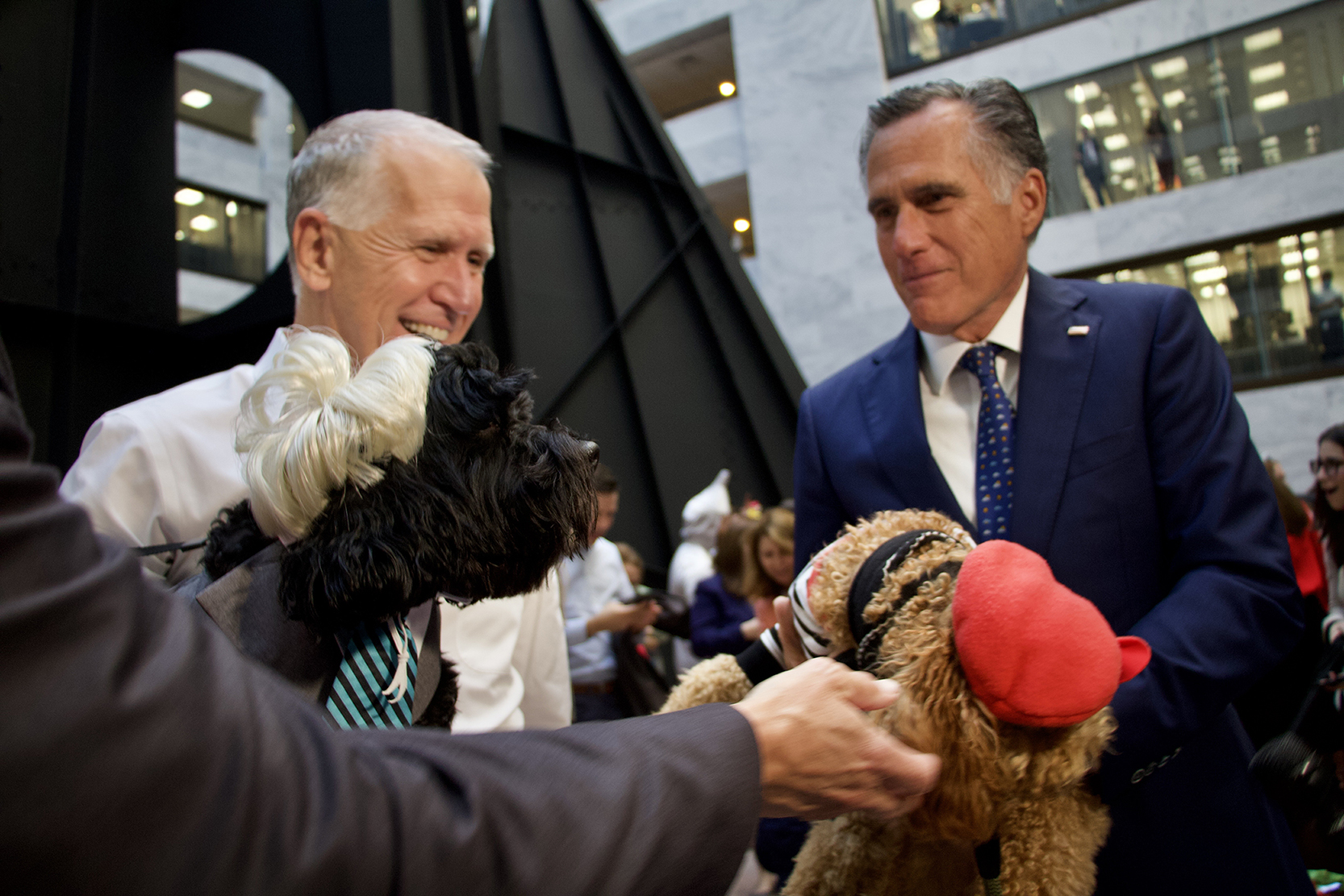 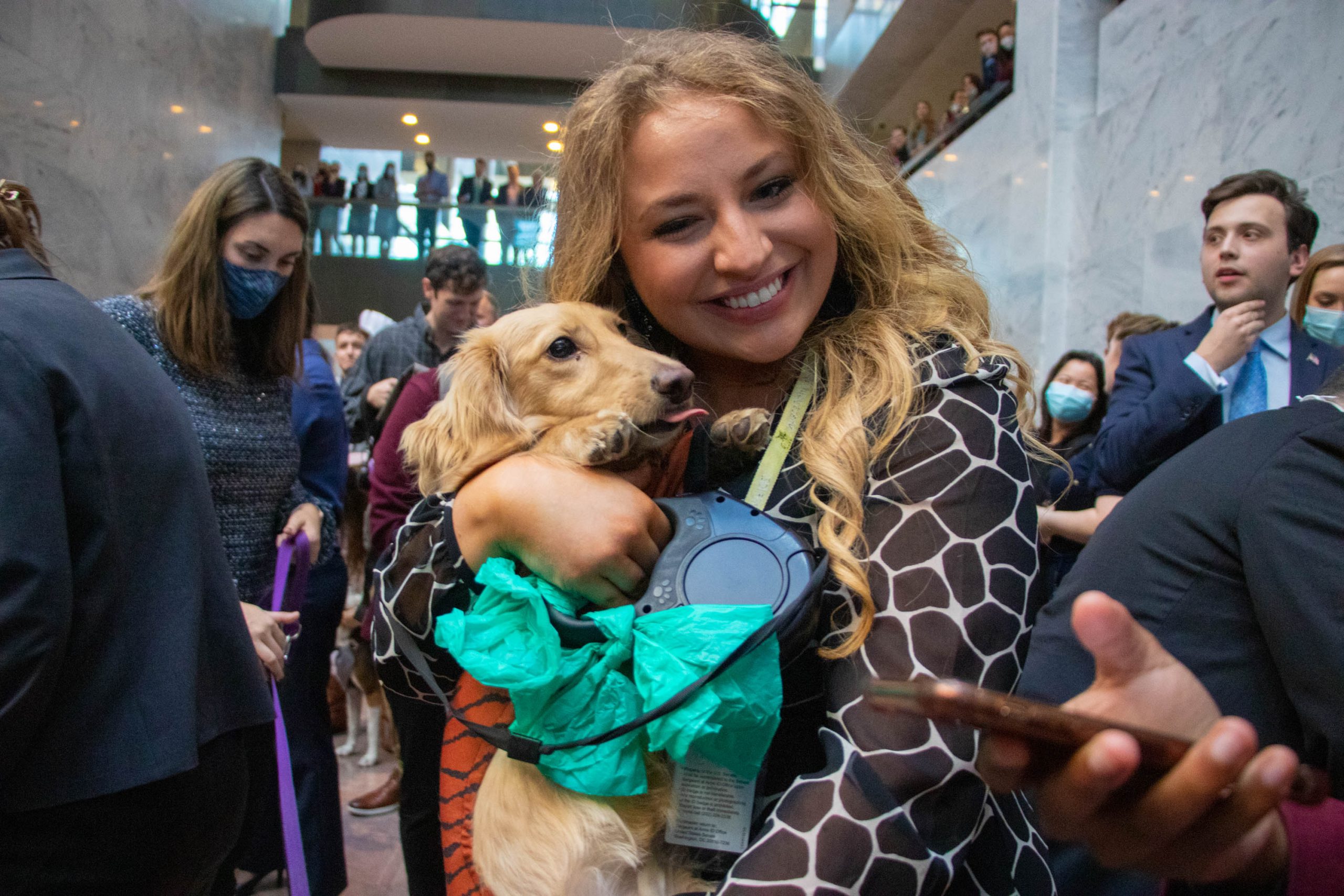 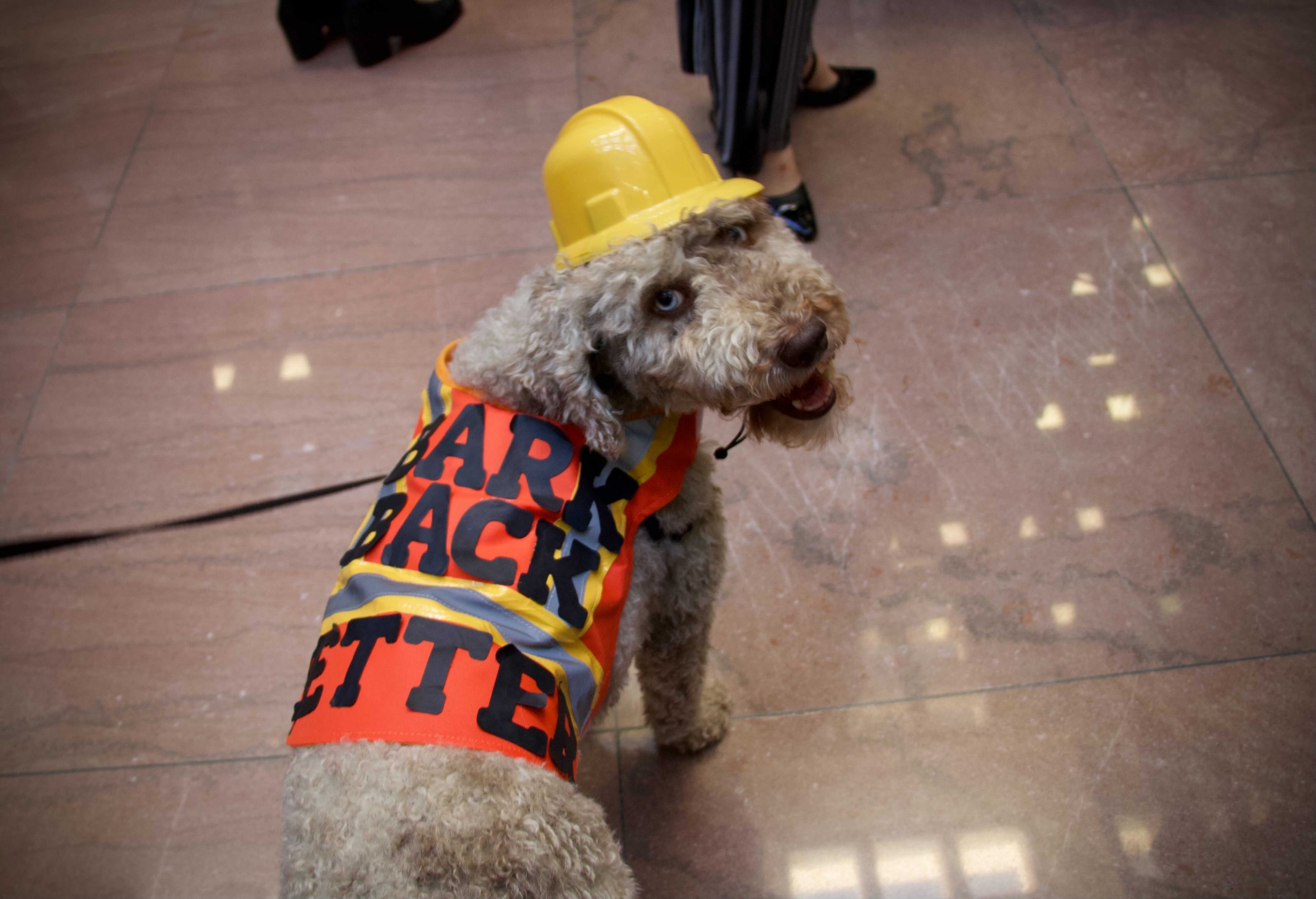 A dog dressed as a construction worker parades around in a vest that reads “Bark Back Better,” in reference to President Joe Biden’s Build Back Better agenda. (Hannah Schoenbaum/Medill News Service) 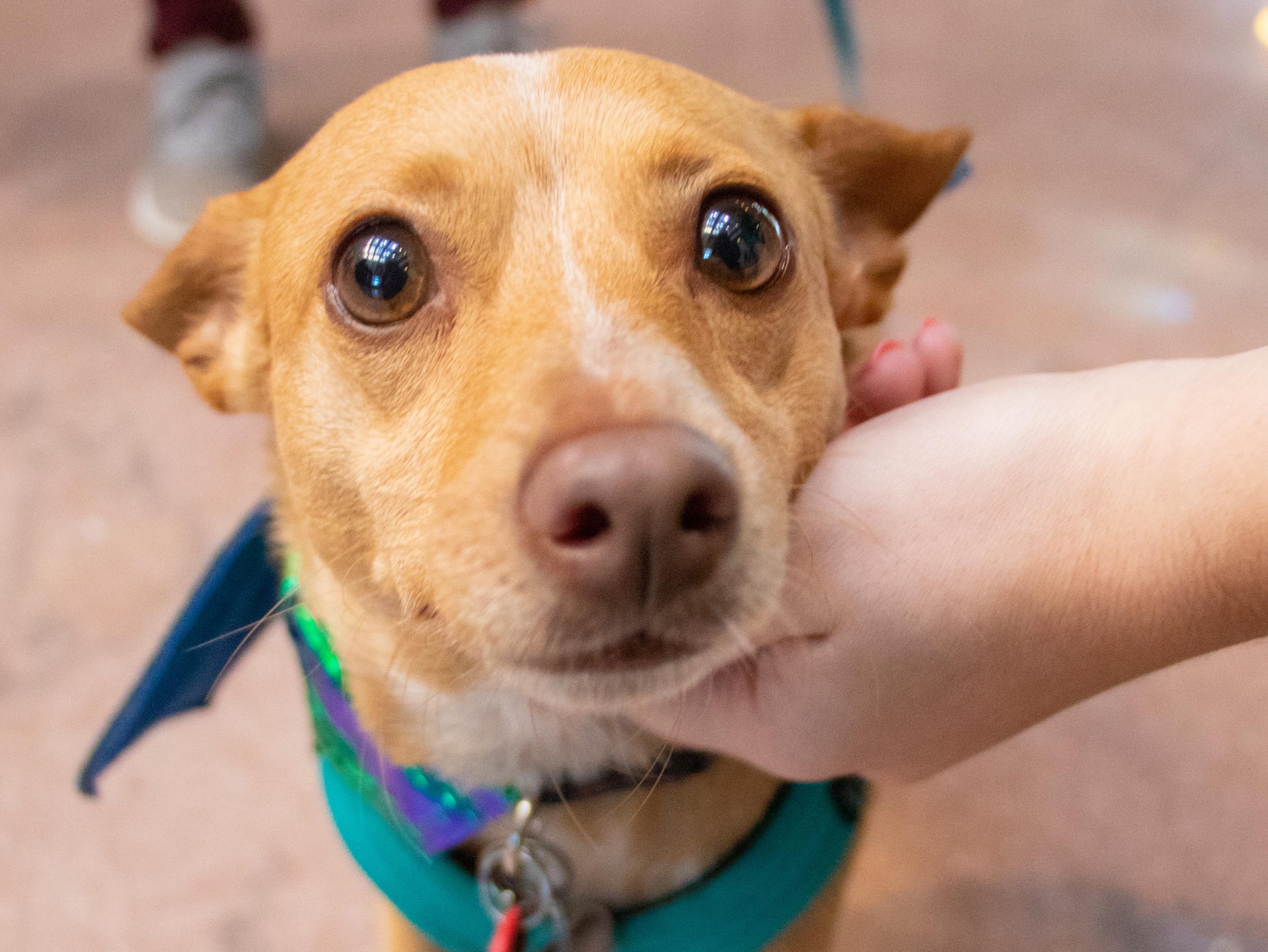 Chihuahua mix Tozi, was dressed as a little dragon and attended the event with her owner Emma Briant. (Isabel Miller/Medill News Service) 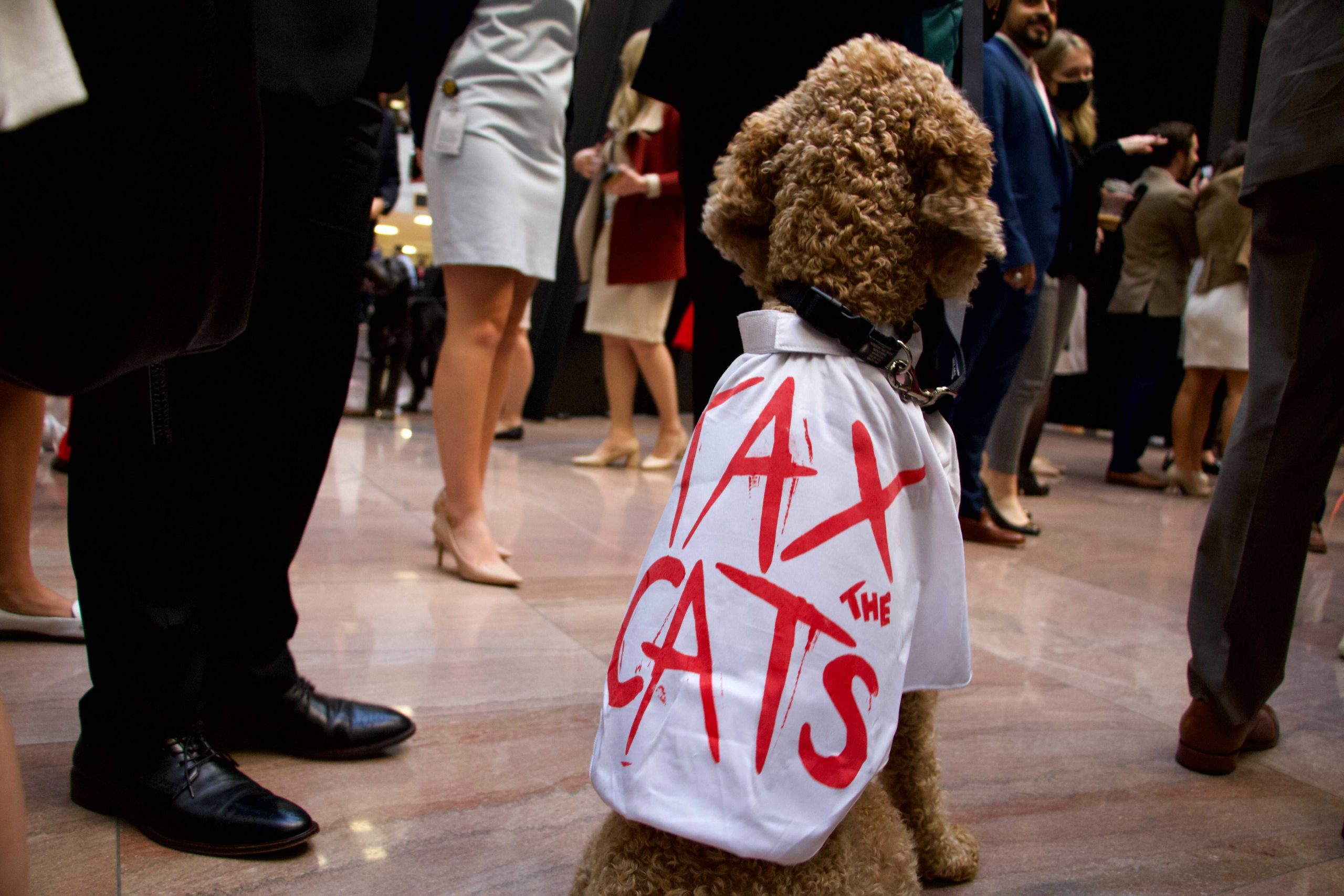 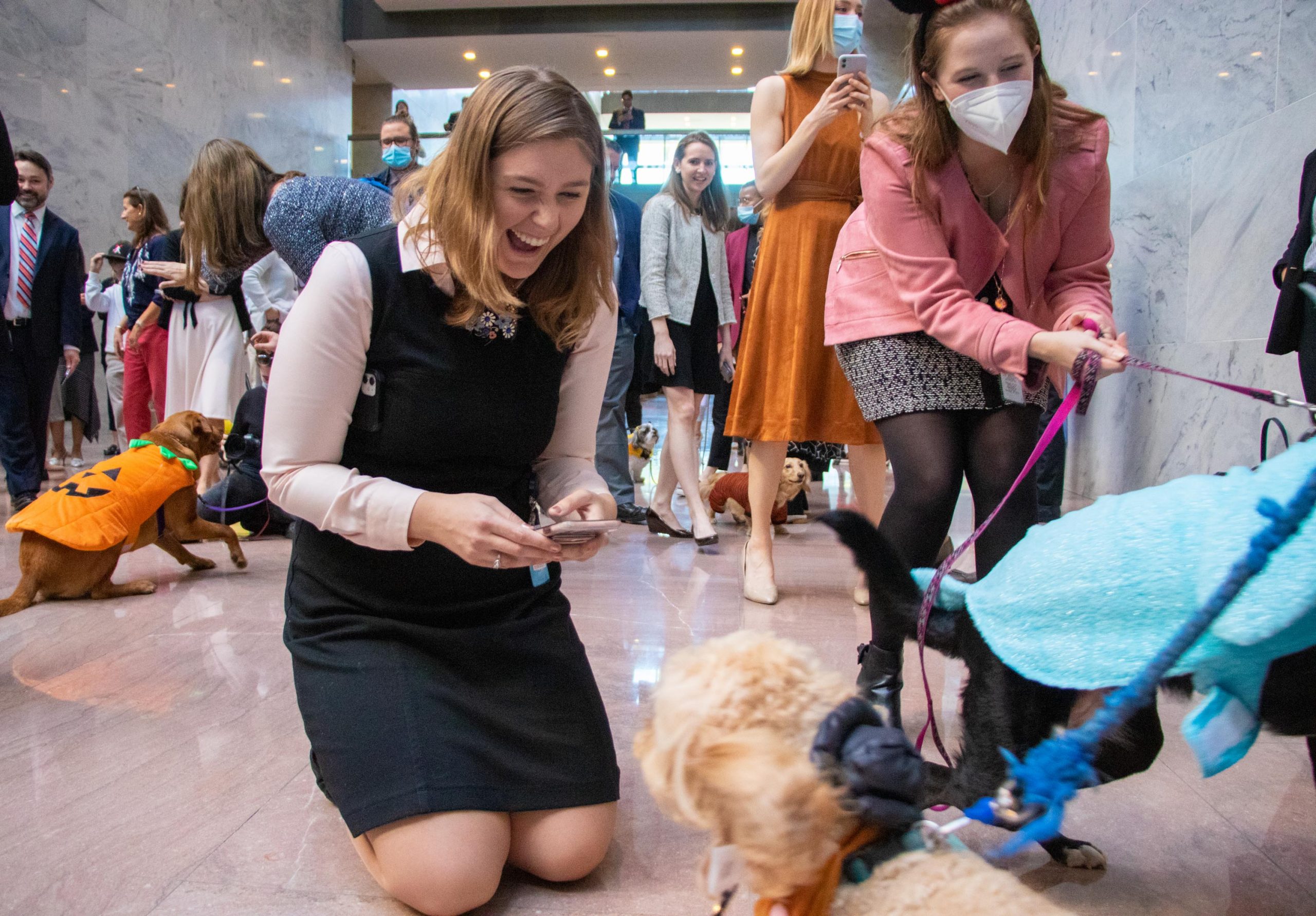 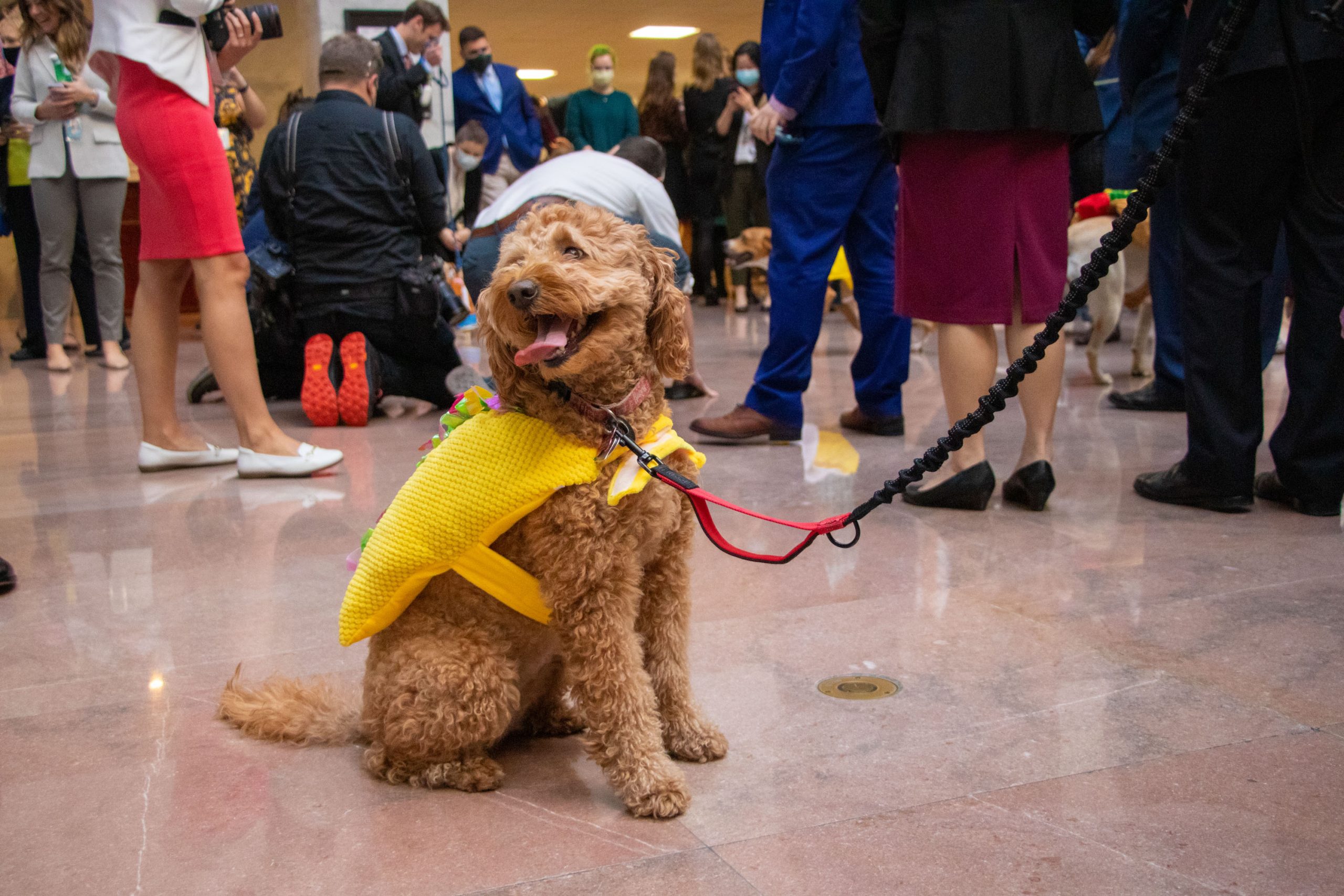 Dogs of all sizes were welcome at the event which is held annually by Sen. Thom Tillis’, R-North Carolina. (Isabel Miller/Medill News Service)

Tillis’ communications director, Adam Webb, told the Medill News Service that the North Carolina senator enjoys “bringing people together on Capitol Hill on both sides of the aisle for a cause we can all get behind – dogs in costumes.”

The senator hosted the first parade in 2017 and hopes to keep it up as an annual tradition, though the event was not held in 2018 due to Congress being out of session nor in 2020 because of COVID-19.

Tillis made sure to do things by the books this year, and with unanimous consent, passed an official Senate resolution authorizing the use of the atrium for the parade.

Tillis did not want a repeat of 2019, when the event drew a larger crowd than expected.

“All of a sudden I go out and it’s like 50 dogs and 100 people,” Tillis said. “Well, the Capitol Police came around, and they thought it was like some sort of spontaneous, unauthorized protest — oopsie.” 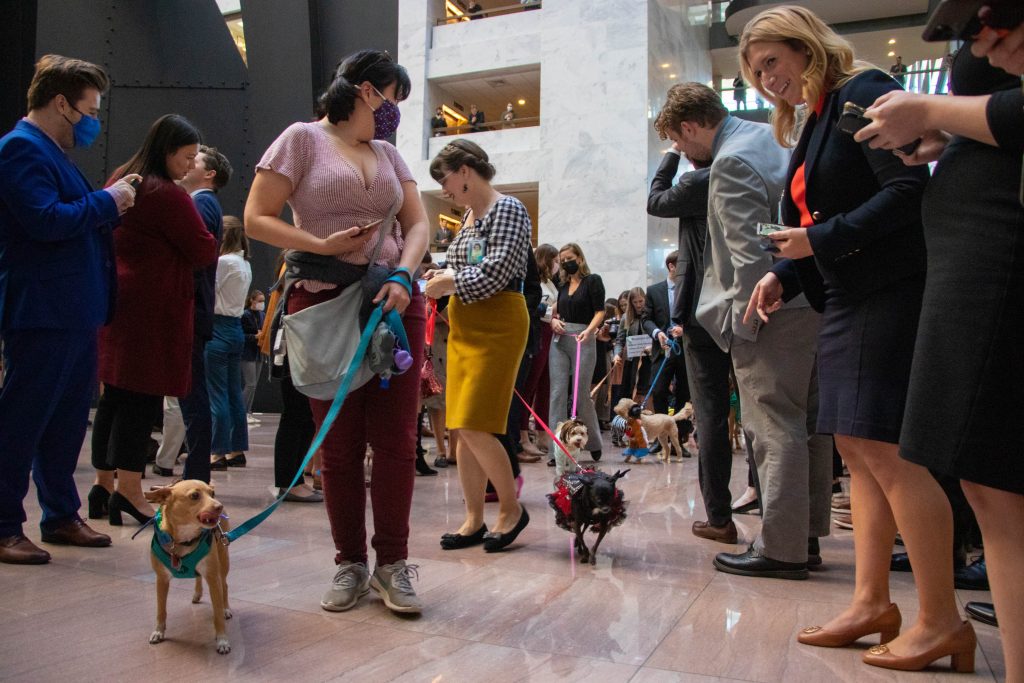 Dogs Tozi and Cricket, dressed as little dragons, walk in the parade with their wonders Emma Briant and Anna Groves Wednesday inside the Hart Atrium. (Isabel Miller | Medill News Service)

Tillis said two of his dogs passed away within four months of each other, and his wife then told him, “we’re not going to get a dog ‘til you get out of the Senate.”

“That lasted about six weeks,” he said.

He then joked about naming his dog Mitch after McConnell.

“I also do it because it plays mind tricks on my staff when they hear me talking about Mitch,” he said. “Sometimes they’ll have like a 30-second delay, like, ‘Oh, you’re talking about the dog.'”

Asked what McConnell thought when he first met his canine namesake, Tillis said, “Oh, he loved it.”

“As a matter of fact, he just sent some staff over to take some pictures and make sure it gets into his archives,” Tillis continued. “He’s a great sport.”

“You get to see a different side of somebody when they’re engaging with a dog, and it’s the good side,” Tillis remarked.