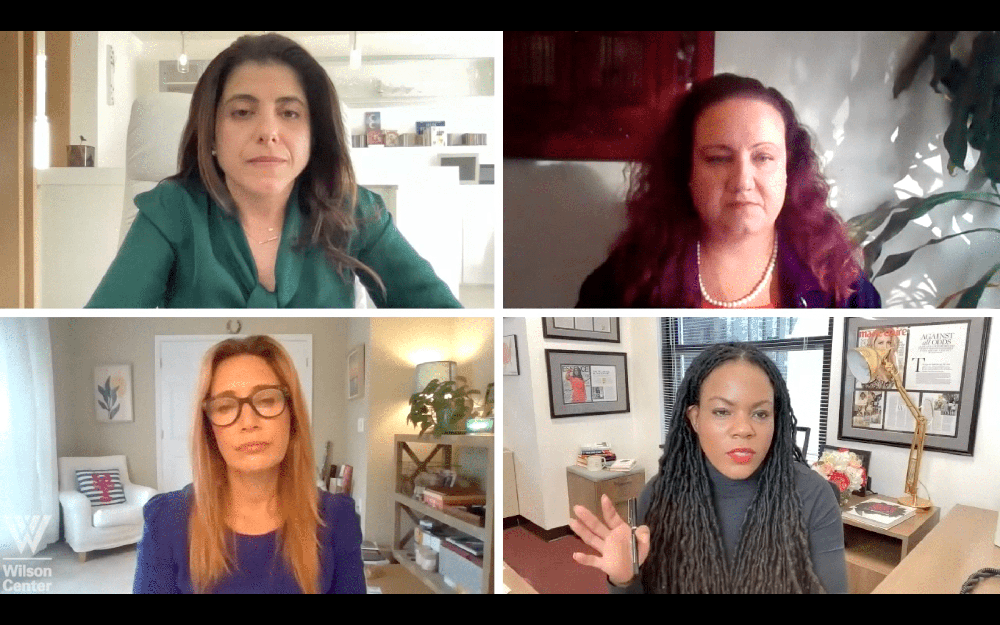 WASHINGTON — When the pandemic struck and schools closed, women stepped into the full-time role of both breadwinner and caregiver. Unable to juggle it all, many were pushed out of their jobs, and so began the nation’s first female recession.

“Women spent 30% more of their time on caregiving responsibilities compared to their male counterparts,” said Nicole Mason, CEO of the Institute for Women’s Policy Research. “You have to know, during the pandemic those numbers were significantly higher, and we understand that women bore most of the brunt of caretaking responsibilities.”

A group of experts joined the Wilson Center’s Maternal Health Initiative on Thursday to discuss the long-term implications of the female workforce exodus caused by the pandemic.

“I think we can all agree that to help women’s paid work, we need to look at supporting their unpaid work, so that no employee has to think, ‘I have to make a choice between caring for my family and employment,’” said Jasmine Greenamyer, vice president and head of global strategic partnerships at EMD Serono.

A recent study conducted by the Federal Reserve Bank of San Francisco found that gender disparities in job loss during the pandemic can be linked to parental responsibility. The study showed that women, more specifically women who are mothers, have suffered the most. In contrast, fathers reported being the least affected group — even in comparison to men without children.

“Women take on, as we all know, a disproportionate amount of care work compared to men, which is often unpaid and undervalued and can further marginalize women,” said Katrina Fotovat, a senior official in the State Department’s Office of Global Women’s Issues for the Department of State.

Fotovat also emphasized the need for investment in care work as a key type of infrastructure in the post-pandemic economy, saying: “pandemic recovery plans cannot simply work to bring economies back to their pre-covid status.”

“We’ve treated care as a private obligation for families rather than a public good,” Mason said. “We recognize it’s worth in value in contribution to the economy.”

The U.S. spends less than 1% of its GDP on care policy, said Mason. Care policy includes both child care and elderly care, and experts on the panel agreed that a better care policy would strengthen the foundation of the economy. Currently, caregiving generates $648 billion a year — a figure that trumps the revenue made by the U.S. pharmaceutical industry.

“This [pandemic] has really knocked women back in so many ways,” said Fotovat. “The economic value of unpaid care work is substantial and important for every economy in the world to address.”

Editor’s Note: Lynn Taylor, senior vice president of EMD Serono, was incorrectly listed as a speaker at this event. She could not participate and was replaced by Jasmine Greenamyer, vice president and head of global strategic partnerships at EMD Serono, on the panel.