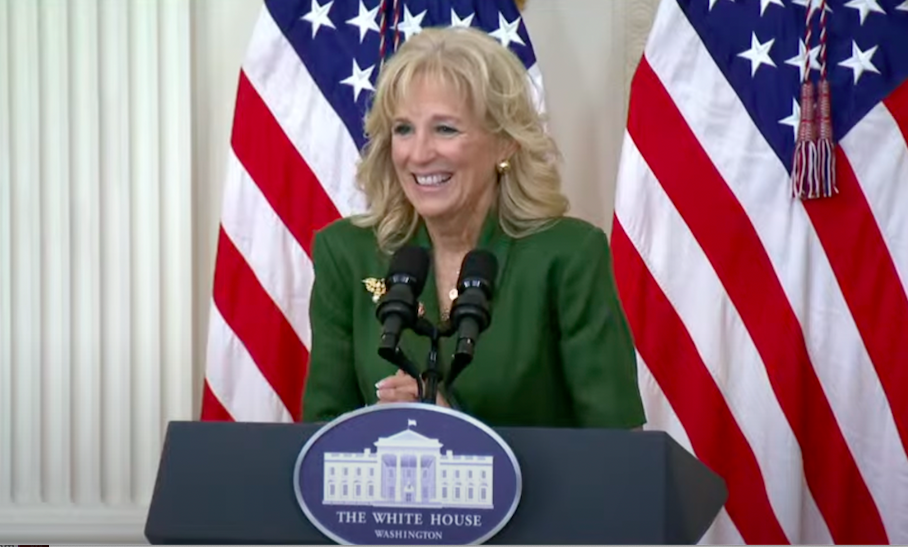 WASHINGTON — First Lady Jill Biden honored children in military and veteran care-giving families as part of her Joining Forces initiative at a White House event ahead of Veterans Day.

Supporting these kids who are “growing up in the shadow of more than 20 years of war… is critical to our national security,” said Dr. Biden, who herself grew up in a military family.

The first lady, who is the daughter of a Navy signalman, and the grandmother of children who lived in a military household, started the program 10 years ago in partnership with then-first lady Michelle Obama. It was established to harness resources from the public and private sectors to support military caregiving families.

Dr. Biden was joined on Wednesday by Sen. Elizabeth Dole, Veteran Affairs Secretary Denis McDonough and Secretary of Defense Lloyd Austin to affirm public and private sector support for the Hidden Helpers initiative, which was launched last April when the first lady teamed up with the Elizabeth Dole Foundation.

The initiative aims to provide an “unseen, unrecognized, and unsupported national service” in providing resources and supportive programming for the children of military caregivers.

“This is the time to recommit ourselves… to renew our obligations to veterans and their families, survivors and caregivers, who make their own sacrifices serving quietly, too often without fanfare or celebration,” McDonough said.

Wednesday’s event was timed to coincide with the release of the first study on the experiences and needs of caregiving children.

The study, commissioned by the Elizabeth Dole Foundation and published by Mathematica Research, found that 2.3 million children under 18 live with a disabled veteran, and that these children have a high likelihood of experiencing physical, mental, emotional and psychological health problems, including increased feelings of isolation, stress, fatigue and developmental challenges.

Sylvia Lopez, a caregiver for her husband Alex, an Army veteran, detailed her experience living in a military family with young children.

“I cannot give them the attention they need because I also have a husband whose life depends on my care,” she said. “Some of Alex’s flashbacks are so violent, that every kid has a place in the house to hide.”

The event boasted a coalition of over 60 organizations, including the Military Child Education Coalition (MCEC) and the YMCA of the USA.

“It’s time that we as a nation recognize you and commit to giving you the support that you all deserve,” Dr. Biden said when speaking to the Hidden Helpers sitting before her.