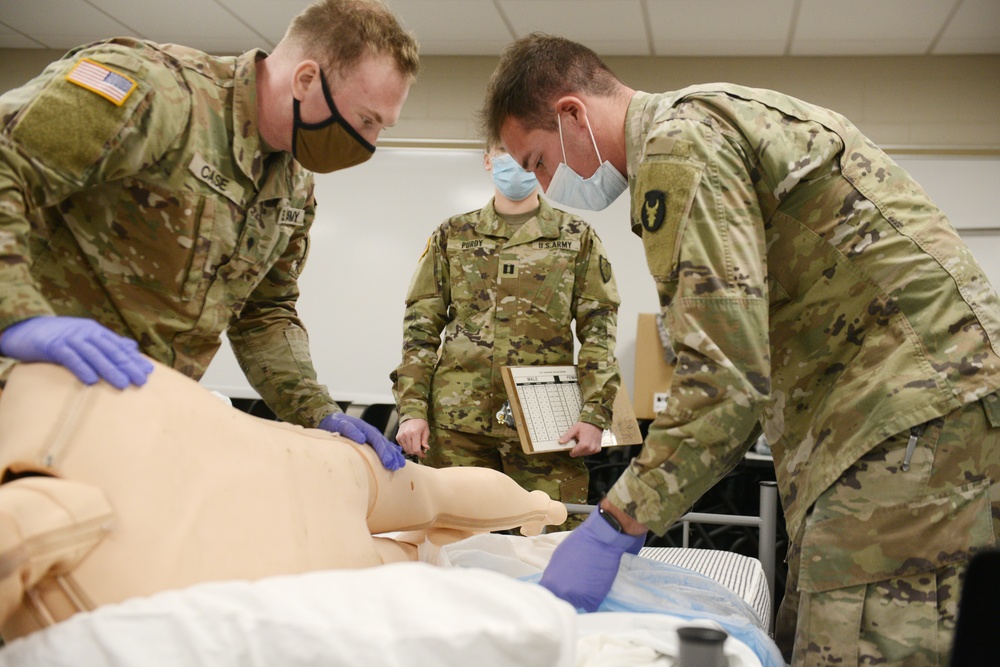 WASHINGTON — Not even a deployment to the Middle East could have prepared 1st Lt. Nikki Flynn of the Minnesota National Guard for her latest mission: assisting at a nursing home as the COVID-19 pandemic relentlessly continues to  wear down medical staffs.

Working as a nursing assistant often means checking vital signs, bathing residents, cleaning their rooms and gathering medical supplies, mundane tasks perhaps but crucial to keeping patients healthy and safe at a time when caregivers are in short supply. For Flynn, it’s been a different kind of rescue mission.

“It’s not anything that I’ve ever done,” she told USA TODAY. “I’ve never thought of myself in a health field position, as a health care worker.”

For most Americans used to seeing National Guard troops helping to evacuate residents from floods, patrolling the U.S. border or keeping the peace to prevent rioting, the sight of soldiers dispatched to nursing homes might seem out of place. But a pandemic that’s killed more than 900,000 also fits the bill as a crisis demanding an army of responders.

“[One] mission they’re deployed for is natural disasters, and certainly a pandemic of this magnitude is a natural disaster,” said Andrew Natsios, executive professor of international affairs at the Bush School of Government and Public Service at Texas A&M University.

The deployment of National Guard members in Minnesota and in other states comes as health care facilities nationwide face a desperate staffing crunch in the pandemic, with workers burnt out by long hours, contracting the virus themselves or even quitting in objection to vaccine mandates.

Flynn is just one of more than 500 airmen and soldiers in the Minnesota National Guard who have been trained as nursing assistants at the request of Minnesota Gov. Tim Walz, a Democrat. The guard is working with 16 colleges across the state to train guard members, often with no previous health care experience, to help address major staffing shortages at nursing homes.

The National Guard Bureau said that as of Jan. 31, more than 19,600 guard members have supported COVID-19 operations nationwide, with duties ranging from testing and swabbing to personal protective equipment distribution and food bank support.

In August, the Pentagon mandated that all members of the U.S. military get vaccinated against COVID-19. Army guardsmen have until June to do so, according to the Department of Defense.

“There’s just this critical need for nursing assistants, not only in Minnesota but in the country,” said Traci Krause, dean of the School of Nursing, Health Sciences and Wellness at Minneapolis Community and Technical College. “When you’ve got the Guard who are highly trained, they’re nearly all fully vaccinated, they’re just potentially a great group of people to get trained [as] nursing assistants [and] be able to provide some support to the workforce.”

“It was an eye-opener, I would say, for a lot of the soldiers going into the long-term care facilities” to realize how much certified nursing assistants do for overall patient care, he said.

Flynn said her experience at the nursing home made her realize just how difficult the strain of the pandemic has been on medical staffs.

“They do a lot of work for these residents,” she said. “So to be able to … help out the health care workers that are there by taking off a little bit of their workload, so they’re able to spend more time with the residents as well, has been rewarding.”

For the Minnesota National Guard, the state’s 75-hour certified nursing assistant training program is condensed into a shortened time period.

“It is the exact same college and schooling that a civilian would get provided, we just did it in a compressed timeline — between seven and 10 days to get it done — to meet the governor’s intent to get into a facility as fast as possible,” Douty said.

In Minnesota, CNAs must take a certification exam to be placed on the state Health Department’s Nursing Assistant Registry and work in a facility, meaning guard members had to pass that exam at the end of their training.

In contrast, Wisconsin National Guard members didn’t have to pass exams; the Wisconsin Department of Health Services allows properly trained individuals to serve as nursing aides without certification for up to 120 days after the start of their training with supervision.

Capt. H. Howey said the Wisconsin National Guard has offered to help guard members who are interested in becoming certified nursing aides by paying for the testing.

Nursing homes were already facing a staffing crunch before the pandemic — and especially the highly contagious omicron variant — accelerated the shrinking of their workforce.

“The unique thing about long-term care is that you’ve got [an] imbalance in supply and demand,” said Lisa Sanders, director of media relations at LeadingAge, an association of nonprofit aging service providers, including nursing homes.

According to PHI, an advocacy group for direct care workers, the caregiver support ratio – which compares working-age adults 18 to 64 with people aged 85 and older – is predicted to decline by 2060. While in 2016, there were 31 working-age adults for every person age 85 and older, that ratio is projected to drop to 12 to 1 by 2060.

The omicron variant, specifically, is more infectious than previous variants. For nursing home residents and staff, who were some of the first to get vaccinated in the country, the variant has been devastating.

“What we’re hearing from members is it’s just incredibly challenging to get people to apply for these jobs,” Sanders said, attributing this to low wages and a robust labor market, in which nursing homes often can’t offer the same flexibility as other employers.

Guard members who are receiving nursing assistant training can either change employment or pursue a career as a CNA, which Douty said is the case for about a dozen members in the Minnesota National Guard.

“I do know of at least five soldiers or airmen that actually have already gained employment from the long-term care facility (they were deployed at) because they’ve been certified as a CNA,” he said, adding that one lieutenant is applying for nursing school after her mission.

‘It makes me feel honored’

Flynn, the Minnesota National Guard member, said that serving as a nursing assistant has been her most meaningful and rewarding experience in the Guard.

“I feel like I’m doing more and being able to give back and help out people more,” she said.

When Flynn first arrived at Birchwood Health Care Center — the second facility she was assigned to — she met a resident who had difficulty walking.

“He had been missing out because he lacked mobility to kind of get around,” she said.

Flynn helped him attend therapy sessions and supported and encouraged him as he improved his walking. The resident even ended up winning at bingo night after she encouraged him to attend.

“He keeps letting us know…that he might be over 90, but nothing is going to slow him down,” she said. “It’s one of those connections that you make with these residents, that it just feels so good, and it makes me happy to be on this mission. It makes me feel honored.”