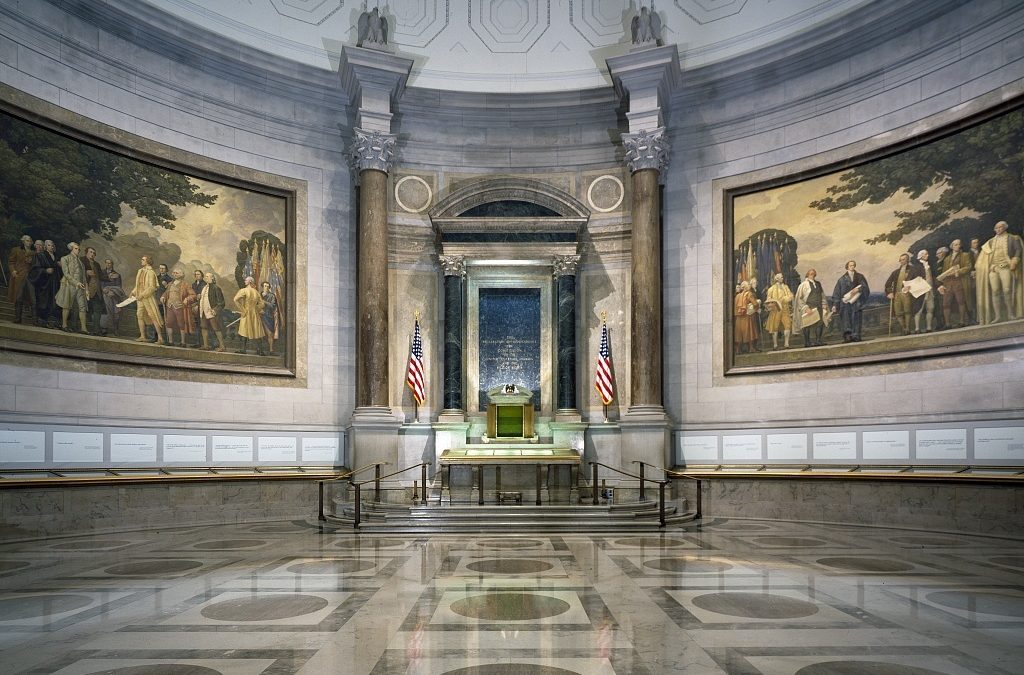 Hall of the Charters of Freedom at the National Archives (Carol M. Highsmith via Library of Congress)

WASHINGTON — After allegations that former President Donald Trump destroyed or mishandled some of his presidential documents, experts told a Senate committee Tuesday that Congress should make it easier for top government officials to comply with the Presidential Records Act and Federal Records Act and toughen enforcement of the laws.

“It’s important because this is our history,” said Anne Weismann, who serves as outside counsel for Citizens for Responsibility and Ethics in Washington and the Project on Government Oversight, two government watchdog groups.

“These records tell the story, our story as a nation. We can’t possibly understand how to chart a course forward if we don’t understand what happened in the past.”

Presidential recordkeeping came into the spotlight recently after a number of reports surfaced that Trump did not follow the Presidential Records Act’s recordkeeping rules. The National Archives and Records Administration recovered 15 boxes of documents, including classified materials, from Trump’s Mar-a-Lago residence and private club in January.

The Washington Post reported in late January and early February that Trump also routinely tore up various documents. New York Times reporter Maggie Haberman, who was writing a book, revealed in early February that White House staff found wads of paper blocking toilets that they believed the president had attempted to flush.

Before Trump, former Secretary of State Hillary Clinton came under fire for her use of an email account on a private server for both personal and work-related communications. Clinton used this account instead of a state.gov email account on a government server.

On Tuesday, the experts testified before the Senate Homeland Security and Governmental Affairs Committee on ways Congress could reform the reservation acts — an issue that appears to have support from both the Democratic chairman of the committee, Sen. Gary Peters of Michigan, and the top Republican, Sen. Rob Portman of Ohio.

Jason Baron, an information studies professor at the University of Maryland, said the laws need to keep up with new forms of technology, in particular ephemeral messaging. Ephemeral messaging refers to messages that are available for only a limited time before they are automatically deleted.

“Such messages when used by officials on matters relating to government business simply vanish from history,” Baron said.

Both Baron and Jonathan Turley, a professor of public interest law at the George Washington University Law School, suggested that Congress ban use of ephemeral messaging apps by officials covered by the laws unless the technology can be modified to produce a record.

Baron and Turley also said use of the Capstone approach should be required in the laws. The Capstone approach was created by the National Archives to provide agencies with an easier method for staying compliant with records laws and to replace an outdated method that required individuals to manually manage their email content.

“One of the reasons that Capstone is so successful, even though voluntary on the part of about 200 federal agencies, is because it automates the process,” Baron said.

“It takes the burden away from people so that the computer system can basically take senior level officials’ emails and put them into an archive without anybody having to manually do anything.”

Weismann said the two acts also lack sufficient enforcement mechanisms. She said judges have said they have no authority to enforce the Presidential Records Act, defeating her repeated attempts to address recordkeeping violations through litigation.

“Why did Congress enact such a toothless law?” she asked. “It assumed presidents would voluntarily comply, both because they would surely recognize the rule of law that is so fundamental to our democracy and because they would want to preserve their place in history through a full historical record.”

Since this has not been universally successful, Weismann suggested that Congress eliminate the disposal provision of the act, which allows the president to seek disposal of some records.

Weismann also suggested a number of other possible reforms, such as requiring the White House counsel to certify that Presidential Records Act-covered employees are complying with the law or enacting a mandatory reporting requirement for the White House counsel to advise the head of the National Archives and the attorney general about the actual or threatened destruction of records.

Additionally, with the National Archives and Records Administration moving to only accept electronic records by the end of this year, Baron said the number of those records will increase significantly, and the National Archives should use new forms of technology to assist with this increase, such as new advanced search technologies, advanced data analytics and machine learning.

Weismann added that she hopes the issue will not be dismissed as partisan politics in Washington.

“Absent a legislative fix, the gap in our historical record will continue to widen, and government officials including those at the highest levels will feel empowered to ignore their recordkeeping obligations at will,” she said.