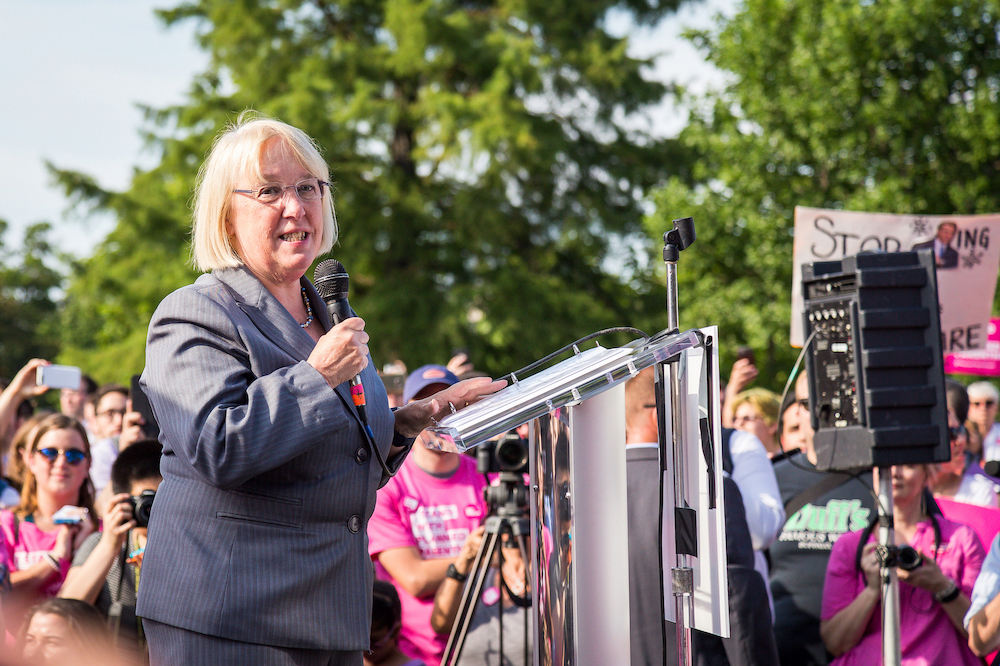 Washington Sen. Patty Murray speaks at a rally to defend the Affordable Care Act at the U.S. Capitol on June 28, 2017. (Photo by Mobilus In Mobili via Wikimedia Commons / CC BY 4.0)

Murray recently reintroduced the Values in Arms Export Act, a bill she introduced in 2020 that aims to increase congressional authority over arms sales.

“I’ve always really tried to stand up for women and girls around the world so making sure the U.S. stands up for human rights really matters to me,” Murray told The Spokesman-Review. “I’m reintroducing this bill because I think it’s really important that the U.S. clearly states that our weapons are not being used to commit war crimes.”

Murray’s bill would amend the Arms Export Control Act to specify that countries purchasing weapons from the U.S. must comply with international norms on human rights and war.

The bill also would create a Human Rights and Law of War Oversight Board that, along with the president and Congress, could designate countries as “countries of concern” if they commit human rights violations.

The designation would last for three years, during which time the Department of Defense would oversee how the “countries of concern” use U.S.-provided weapons. If a country commits further violations, is designated a “country of concern” a second time within 10 years or doesn’t make enough progress toward reform, it would be banned from buying U.S. arms for 10 years.

Under Murray’s bill, the first two countries to be designated “countries of concern” would be Saudi Arabia and the United Arab Emirates.

The Democratic senator, who serves on the Senate Appropriations Subcommittee on Defense, also was an original co-sponsor of a similar bill called the Safeguarding Human Rights in Arms Exports Act.

The bill seeks to reassert congressional authority over arms sales, which has been diminished in recent years by a Supreme Court ruling, as well as previous presidential administrations.

Arms sales typically go through both an informal and formal process of congressional approval. The president usually informally notifies the Senate Foreign Relations and House Foreign Affairs committees of arms sales before issuing a formal notification. After the formal notification, Congress has either 15 or 30 days to review the sale, depending on the country.

Up until the 1980s, Congress could vote to prevent arms sales it opposed in a way that did not require sign off by the president. However, this changed with the Supreme Court decision in Immigration and Naturalization Service v. Chadha in 1983.

In that case, the Supreme Court ruled that the so-called legislative veto violated the constitutional requirement of bicameralism, which requires that both houses of Congress agree and that legislation be sent to the president for signature.

Because of the ruling, Congress now must disapprove arms sales by passing resolutions that are subject to presidential veto. Congress can only overturn such a veto with two-thirds of the House and Senate in agreement.

“If Congress is to continue delegating authority to the executive branch to carry out these sales, strict and effective congressional oversight is imperative,” a spokesman for Murray’s office said in a statement. “When strong bipartisan majorities object to a sale, especially over critical issues like law of armed conflict violations, that has to mean something.”

The executive and legislative branches came to a head over these processes in 2019. Former President Donald Trump declared an emergency to allow for an $8 billion arms sale to Saudi Arabia and the United Arab Emirates after informal discussions stalled.

Using the emergency declaration, Trump bypassed the congressional review period, which caused an uproar. Congress was able to pass resolutions to halt the sales but was unable to override Trump’s veto.

“[T]he executive branch, particularly under the previous administration, has too often overridden Congress and looked to remove meaningful congressional oversight,” the spokesman from Murray’s office said. “This is a distortion of the fundamental separation of powers.”

Jeff Abramson, a senior fellow at the Arms Control Association, said Murray’s bill would tackle the oversight issue by requiring a cessation of arms sales in some instances.

However, John Erath, senior policy director at the Center for Arms Control and Non-Proliferation, noted that it is also important to maintain some flexibility for the executive branch within arms sales.

“How do we strengthen your ability to respond to human rights problems that are well-known and well-documented and still give you the freedom to approve sales where it is in the U.S. interest?” Erath said.

The current conflict in Ukraine represents an example of this issue, Erath said. There is bipartisan support for providing military assistance to Ukraine in the face of Russian military actions; however, Erath added that Ukraine has had a history of highly corrupt governments, and some of its laws have been described as discriminatory.

“It’s a case where we ordinarily would be asking questions, but we want to preserve the option of being able to supply defensive weapons to Ukraine when we perceive it as in the U.S. interest to do so,” he said. “So, a good law will be able to build in some of that flexibility, while at the same time giving the administration the tools they need to be able to make the right statements about the importance of observing human rights standards.”

Erath said it’s all about finding a balance.

“When you are putting together a policy, and this is for both the executive and legislative branches, you have to consider what the proper balance should be,” Erath said. “And it is a balance that changes over time, so you want to have the ability to adjust as you go.”

A chance for bipartisanship

While efforts to amend arms control processes could get lost in the backlog of legislation, Erath said he thinks this type of legislation could garner bipartisan support relatively easily if approached in the right way.

“Everybody agrees on the importance of human rights standards,” he said. “Most everybody agrees that military exports are a valuable foreign policy tool, and [when] properly regulated can serve U.S. interests.”

Abramson noted that in recent years, “Congress has shown a much heartier appetite to address arm sales and to provide oversight so the whole issue area has more possibility to move forward.”

Several other legislators have introduced similar bills to change congressional oversight of arms sales and prevent the misuse of U.S. weapons.

However, Abramson added that it’s difficult for any legislation to make it through Congress right now, given how divided it is.

“It’s frustrating, though, in that much of the legislation is based upon Congress reasserting its authority or using its authority, which should be a bipartisan issue,” Abramson said. “But in these days, there’s very little that’s bipartisan.”

Murray said she is committed to trying to find support for the legislation no matter the partisan divide.

“I also believe it’s really important to put legislation forward and then use my voice to talk to members on both sides of the aisle about why I believe it’s important and to build that support,” she said. “That’s what I’m doing right now.”