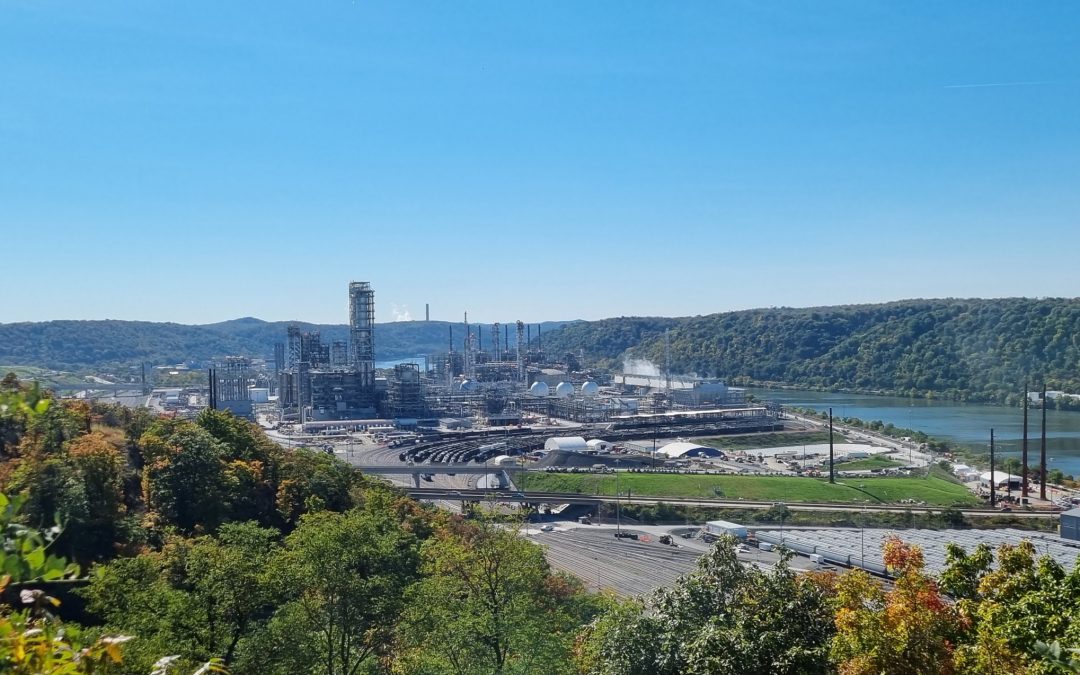 Environmentalists in Beaver County alarmed by harmful emissions from the plant once it opens say they are discouraged by most voters’ inattention, but not deterred.

ALIQUIPPA, Pa. — From the tranquility of her garden in Beaver County, Pennsylvania, Terrie Baumgardner worries that her grandchildren will grow up without access to clean air, clean water and a safe space to play outdoors.

For decades, Beaver County’s economy has been dependent on polluting industries—first steel, and more recently natural gas drilling. Many longtime residents, who remember the prosperity brought by the steel industry, have welcomed the construction of a massive new Shell petrochemical plant and the politicians that support it.

Baumgardner and other environmental activists are discouraged that local residents and politicians favor the continuation of fracking and the new mega plastics plant it has spawned, but they are not giving up their fight.

“People say that’s what we do in Beaver County—we trade our health for jobs,” Baumgardner said. “But it’s unfortunate, because it doesn’t have to be that way now.”

A reluctant activist, Baumgardner first became involved in environmental issues in 2011, when she learned about the dangers posed by fracking. Concern for the environment and health of local residents led her to canvas for signatures in 2016 as Shell moved toward building the plastics plant.

Spanning nearly 800 acres along the Ohio River, the plant is expected to open later this year. The facility will convert fracked gas into 1.6 million metric tons of polyethylene per year. Polyethylene, made from ethane, a form of natural gas, is the key building block in numerous common plastic products—from food wrapping and trash bags to crates and bottles.

Despite assurances from Shell that the facility will be safe for the surrounding community, environmental activists have warned that the plant will cause air and water pollution, and a protracted dependence on fracking.

Under Shell’s permit, the plant can release up to 159 tons of fine particulate matter and 522 tons of volatile organic compounds per year. Exposure to these emissions has been linked to issues in the brain, liver, kidney, heart and lungs. They have also been associated with miscarriages, birth defects and cancer.

“They’re going to unload all of these toxic chemicals, hazardous air pollutants, volatile organic compounds and millions of tons of CO2 gas. What’s going to happen?” asked Bob Schmetzer, a local councilman from nearby South Heights and a long-time spokesperson for Beaver County’s Marcellus Awareness Committee. He has opposed the plant since it was first proposed 10 years ago.

Jack Manning, a Beaver County Commissioner, does not share these concerns. “I have great faith in the technology and in the competency of those that will be running the facility,” he said. “It’s a state-of-the-art, world-class facility.”

Manning blamed people’s apprehension on unfair comparisons between the environmental impacts of the plant and those of the steel mills that used to occupy the area. “Those heavy particulates are a different type of pollution,” he said.

Shell has assured residents of the safety of its plant. “At Shell, safety is our top priority in all we do and that includes being a good neighbor by communicating about plant activities that could cause concern if not expected,” Virginia Sanchez, a Shell spokesperson, said in a statement. “When we are in steady operations, it is our goal to have little to no negative impact on our neighbors as a result of our activities.”

For activists, these assurances do little to allay concerns. On a grassy hillside overlooking the massive complex, Schmetzer spoke with his friend and fellow activist, Carl Davidson. While the plant is not yet operational, the grinding sounds of industrial machinery and screeches of train cars disturbed the clear fall day. 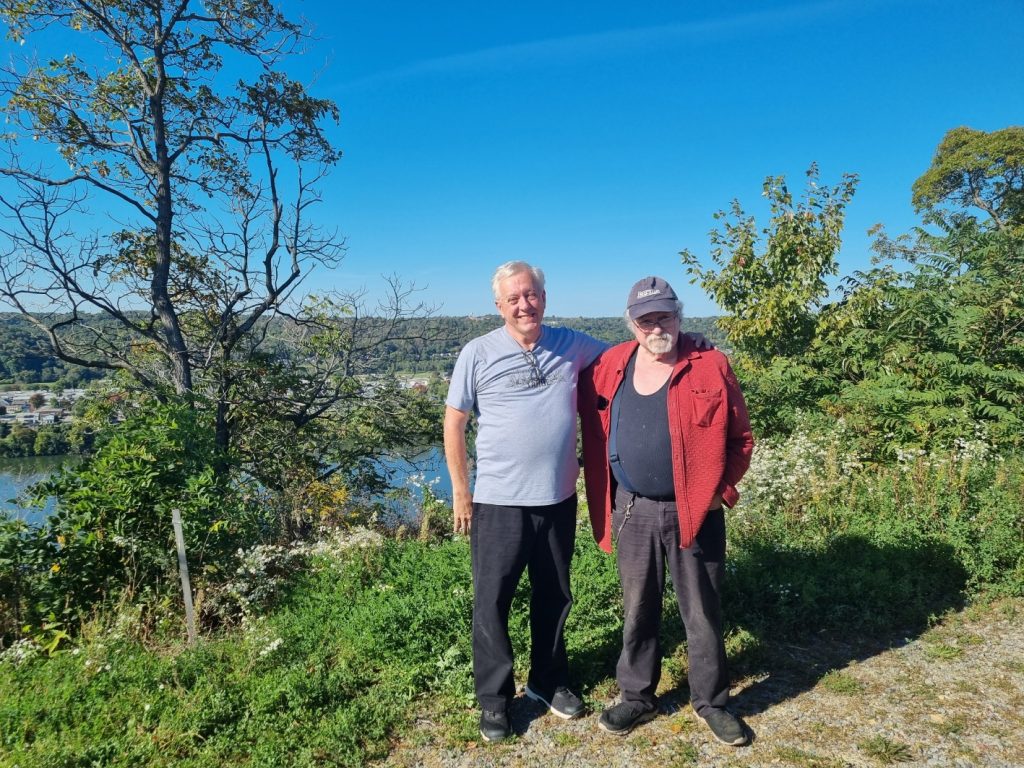 Davidson, a self-professed “solar, wind and thermal guy,” wore a Bernie cap and alluded to his youth as a student leader of the New Left movement in the 1960s. While he estimates that around one-third of residents were concerned about the plant’s potential impacts from the beginning, he expects this number to grow once it opens. “People are starting to see two things,” he said. “Number one, there is all kinds of pollution that they didn’t know about. And second, all the jobs that were promised aren’t real.”

The plant sparked hope for a revival of economic prosperity in the area. However, now that construction is largely complete and thousands of workers have finished working on the site, the plant is expected to only employ about 600 people going forward, according to Shell.

While opponents wait anxiously for the plant to begin operations, they don’t think it will influence next week’s elections. The Shell plant has been a non-issue in the tight race for the 17th Congressional District in Beaver County between Democrat Chris Delluzio and Republican Jeremy Shaffer, both of whom support continued fracking.

In the state’s closely watched U.S. Senate race between Democrat John Fetterman and Republican Mehmet Oz, both of whom support fracking, the environment has barely come up in a nasty campaign focused on abortion rights.

Similarly, fracking and the environment have hardly been mentioned in the governor’s race between Democrat Josh Shapiro, the state’s attorney general, and Republican state Sen. Doug Mastriano, a Trump supporter and election denier.

Beaver County, while only counting for 1.3 percent of the votes cast in any given election in Pennsylvania, is a bellwether, according to Professor Lara Putman of the University of Pittsburgh. “It is socio-demographically similar to counties that, collectively, make up about one-quarter of Pennsylvania’s population. So in that sense, when Beaver shifts other places are usually shifting as well,” she said.

“I wish they would have the courage to speak up, to take a position and stick with it,” she said.

However, she understands the political risks associated with taking an environmental stand in a community that believes its economic fortunes are tied directly to pollution. She just wishes this wasn’t still the case. “We have alternatives,” she said. “We just need our political leaders to embrace them and get serious about renewables and removing the subsidies on fossil fuels.”

According to Davidson, the key to awakening the public is to ensure that alternatives are tangible. Good ideas aren’t enough to make people give up the job opportunities they have, he said. Clean energy projects are great in theory, but until workers can see a real job with similar wages, many will continue to support the status quo.

Progress might be slow, but Baumgardner, Davidson and Schmetzer remain hopeful that the realities of the plant will sway public opinion once residents’ senses are assaulted with the acrid smells and cacophony of relentless sound they expect the new plastics plant will emit. They each stand ready to educate people on its health and environmental impacts, as soon they are ready to listen. They may be discouraged, but are not deterred.

“Nothing is going to shut me down as long as my grandkids are here,” Baumgardner said.