September’s Operation Cross Check was the second nationwide operation and the largest ever conducted by customs enforcement. A May operation led to the arrest of more than 2,400 convicted criminal aliens. 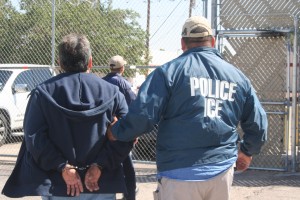 “You are going to see a sustained focus on criminal offenders from the agency,” said Immigration and Customs Enforcement Director John Morton. “It is our highest priority.”

Enforcement officers remove about 390,000 per year, said Morton, and more than half are criminal offenders.

“We also remove people other than criminal offenders,” added Morton, “for example: people who ignore immigration orders, people who are deported and come back again.”

The announcement comes as cities such as Chicago and New York have passed legislation blocking local involvement in the Secure Communities program, collaboration between local law enforcement and immigration databases that continues to draw protest around the nation.

“These are not people making a positive contribution to their communities,” Morton said, “they are not the kind of people we want walking our streets.”

“If you come here lawfully, you work hard, you play by the rules, we welcome you with open arms,” he said. “If you come here unlawfully and turn to a life of crime, a different reception awaits you, namely arrest and removal.”

A median of 24 arrests was made per state, including territories, with the biggest number of arrests in California (484), Texas (350) and Florida (254). Arrests spanned 115 nationalities and included about 680 immigration fugitives.

“Somewhere around 1 million people with criminal convictions are subject to removal under the law,” estimated Morton.

The operation is part of President Barack Obama’s ongoing campaign to prioritize the arrest of criminal aliens and excessive immigration law violators, said a statement by customs enforcement.