WASHINGTON – When Brian Copney returned home to West Virginia from Iraq, he had trouble adjusting to life in his rural community. Thanks to his family, he learned how to deal with his serious anger issues that stemmed from his Army service.

“When I got out, the only thing they did was ask you, ‘Have you been through this? Did you experience this?’ and slap you on your derriere and send you out the door back home,” he said. 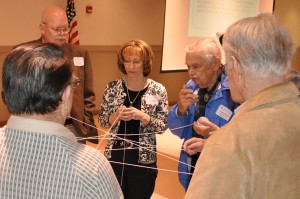 Copney left the Army in 2007 and is now a Baptist pastor in Beckley, W.Va. He said he felt lucky to have the support he did. Many from his unit had far less, and he wished the military did more to help returning service members.

“Whether daddy wants to admit it or not, daddy is different,” he said.

The Veterans Health Administration, responding to the growing number of veterans with mental health issues, has created a program to enlist rural clergy members in connecting veterans with VHA resources. Thirty to 40 percent of new veterans are returning to rural areas, according to the VHA’s Office of Rural Health. Veterans living in rural areas typically have more health problems, and that’s exacerbated by the fact many Department of Veterans Affairs services are far from the rural areas these veterans call home.

Veterans in rural areas are less likely to get help for mental health needs. But because many are likely to go to clergy for those needs, the VHA is holding workshops in five Southern states over the next few months to help clergy better understand the mental and spiritual health needs of veterans and what resources the VHA offers.

The response, said James Goalder, a clinical psychologist who works with the program, has been overwhelming.

“Since the public relations press release went out, I have been contacted by over 23 states, four congressional offices, Guam and somebody from Uganda,” he said.

Copney participated in an April 12 training session in Beckley.

The workshops, Goalder said, assist clergy members’ ministry by helping them better understand the issues, obvious and less so, that veterans might bring back.

Many veterans – perhaps 30 percent, according to Goalder – will have mental health problems great enough to affect their daily lives.

Execerbating the problem, many returning veterans are National Guard members or reservists who, unlike active-duty military, don’t have the built-in support structure of a base, instead going  right back to their small towns, explained Jeni Cook, associate director at the VHA National Chaplain Center and one of the program’s organizers.

“When they return they take off their uniform and they put back on their civilian camouflage, and they just kind of get lost in the community,” she said.

The training program for clergy has an extensive spiritual focus “since that’s their bread and butter,” Goalder said, but it also provides them with guidance on who to call if an issue enters an area beyond their expertise, like mental health.

Every participant is given a “cheat sheet” with contact information custom-tailored to each area the program visits to help local clergy find what they need faster. Clergy members are also connected with a chaplain at the VHA who can provide direct guidance for clergy and parishioners.

This part of the system, Copney said, is one of the most useful, especially when helping veterans in their congregation deal with the Department of Veterans Affairs’ bureaucracy.

“As a pastor, I’m standing there telling them I have something that’ll help you out, but then it ruined my credibility because we’re going through answering services,” Copney said.

Another major emphasis of the training is on reducing the stigma associated with mental health problems, Cook said, by building a communal attitude for assistance through local clergy.

“They’re community leaders, and we would like them to try to help dispel some of the stigma of asking for help, to reframe that,” she said. “It takes courage to ask for help.