WASHINGTON — Jack Faust, a Navy veteran who will turn 101 years old on April 24, has won nine gold medals and two silvers the past five 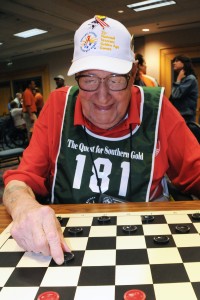 And he hopes to add a few more to the wall this year, when he competes for the sixth time at this year’s games in late May in St. Louis.

He started competing more or less on a whim. He was never very interested in sports, save some sprinting and jumping in high school and watching football, but when a nurse told him about the games, the idea caught his attention.

The Department of Veterans Affairs puts on the games to promote active lifestyles for older veterans. He insists winning his medals are mostly luck, and the shot at gold isn’t what kept bringing him back each year.

Faust plays shuffleboard and bowls from a wheelchair, and he also competes in the air rifle competition. His success there, he admitted, has been limited, and the competition, stiff.

“We had one Marine sergeant, he had one hole in the center of the target,” he said. “After they looked at it real close, all five shots went through the same hole.”

“But I’m going to give it another try,” he said.

Faust served two tours with the Navy, his first in the Yangtze River Patrol after he turned 16, and his second the day after Pearl Harbor when he returned to join the Seabees.

After his discharge, he settled in California. He’s been living in his Hayward, Calif., apartment for the past 50 years, and has raised more than two dozen grandkids and several some great-great grandkids.

“I’m just so thankful, I say my prayers ever night,” he said, thanking God for another day. “So far my prayers have been answered.”