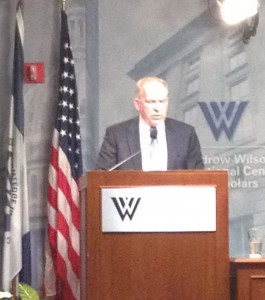 John O. Brennan, assistant to the president for homeland security and counter-terrorism, said drones “apply with all applicable laws, including the laws of war.”

The American people expect the government to use the latest technology to wage war, he said at the Woodrow Wilson International Center for Scholars. The president, in turn, has the constitutional duty to protect the country “from any imminent threat of attack.”

Every country has an “inherit right of national self-defense,” he said, and there is no prohibition on the use of drones in warfare.

“We continue to believe, based on the information available, that the program itself is not just unlawful but dangerous,” she said via e-mail. “It is dangerous to give the president the authority to order the extrajudicial killing of any person — including any American — he believes to be a terrorist.”

Brennan acknowledged the growing debate over the drones’ proper use in war and the debate spilled into his appearance when a woman in the crowd stood up, pointing out that civilians are killed in drone strikes.

“You are making us less safe by killing so many innocent people around the world. Shame on you,” she said while police escorted her away.

Brennan argued that the strikes are ethical tools for waging war because they are especially effective at preventing collateral damage and civilian casualties.

“One could argue that never before has there been a weapon that allows us to distinguish more effectively between al-Qaida terrorists and civilians,” he said. “It’s this surgical precision, the ability, with laser-like focus to eliminate the cancerous tumor called an al-Qaida terrorist while limiting damage to the tissue around it that makes this counter-terrorism tool so essential.”

Brenner didn’t specifically speak to the targeting of U.S. citizens who work for terrorist groups but he did express his support for the arguments put forth by the administration to justify the use of drones.

“This is an important statement,” Jameel Jaffer, deputy legal director at the American Civil Liberties Union, said via e-mail. “It includes an unambiguous acknowledgement of the targeted killing program and second because it includes the administration’s clearest explanation thus far of the program’s purported legal basis.”

Brennan’s speech came just before the first anniversary of the killing of al-Qaida leader Osama bin Laden, and Brennan’s appearance was part of what he called a greater push by the administration to be more transparent about counter-terrorism strategy.

Tom Donnelly, a national security and defense researcher at the American Enterprise Institute, a conservative think tank, said he agrees with the administration’s reasoning behind the legality of drone strikes.

People like Anwar al-Awlaki, a U.S.-born militant killed in a drone strike last year are enemy combatants, he said, and are “subject to the law of war, not the law of peace.”

During his speech, Brennan anticipated the criticisms from those who feel the government divulges too much information about counter-terrorism and from those who demand more transparency.

“If both groups feel a little bit unsatisfied,” he said, “I probably struck a right balance.”