WASHINGTON — Thousands of undocumented immigrants and their supporters gathered at the Capitol Wednesday to call for comprehensive immigration reform, just days after New York Democratic Sen. Charles Schumer told Face the Nation that a bill could be released by the end of the week.

Demonstrators were bussed in from as far away as Chicago and Los Angeles for the Rally for Citizenship, which topped off a week of activity on the hot-button issue.  The gathered crowd came with a common goal of pushing Congress to enact change in current immigration policy, which currently offers few if any pathways to citizenship for an estimated 11 million people.

With chants of “The time is now” and “Si se puede,” the crowd represented the immediacy of the demand for immigration reform, which has failed to pass through Congress despite President Barack Obama’s promise to address the issue in his first term.

Many at the rally said they hope to see Congress address family reunification, driver’s licenses, stronger protection for low-skilled and temporary immigrant workers. Demonstrators also called for an end to deportation policies that have seen more than one million immigrants expelled from the country since Obama took office.

The crowd filled the West Lawn of the Capitol and spilled over into the neighboring National Mall, where supporters of comprehensive immigration reform waved flags of their home countries—Argentina, Mexico, Brazil—and carried signs reading, “No human being is illegal” and “Reforma ahora.”

Members of labor, immigration rights and humanitarian groups such as Casa de Maryland, the NAACP, Service Employees International Union and the Center for Community Change were joined by local and federal politicians.

Washington Mayor Vincent Gray, known for his strong action on immigrant rights and for signing an executive order barring public agencies from checking a person’s immigrant status, told the crowd, “There is strength in numbers—no one can ignore us today.”

Despite a large presence of immigrants from Nepal, India, Korea and China, many of the speakers spoke to the crowd in Spanish or offered translations in both Spanish and English.

Rep. Luis Gutierrez, D-Ill., a first-generation Puerto Rican-American and one of the most vocal proponents of both the Illinois and Federal DREAM Acts, received an enthusiastic response from the crowd as he called upon Congress to go “beyond the DREAM Act” and extend rights to all immigrants, not just youth.

“There are no acceptable excuses to failing to pass immigration reform this year,” he said, addressing his colleagues in Congress.

Before the rally kicked off in the late afternoon., many constituents spent the morning meeting privately with their elected representatives to lobby for immigration reform.  The Senate’s “Gang of Eight” is expected to release a bill by the end of the week, and Sen. Patrick Leahy, D-Vt., announced Wednesday that the Senate Judiciary Committee will hold an immigration reform hearing next week.

Sen. Robert Menendez, D-N.J., was the only member of the bipartisan eight-member group to attend the rally.

The senators have been drafting a plan for reform since January.  Menendez said they have “come to an agreement on all the major issues” and “are writing the bill as we speak.”

He said the bill is a “strong foundation” and that he and his  fellow senators working on the compromise plan are confident that next week’s hearing will bring action. 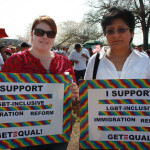 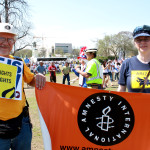 “I can definitely relate to these many many undocumented people here who are worried every day that they’re going to be separated from their kids. I’m originally from Germany…and when my children were first born they had citizenship because they were born here. I was not a U.S. citizen so I was always concerned. I had a fear in the back of my mind that I might be torn away from them, I might get deported.” Ute Ritz-Deutch, 50, of Ithaca, N.Y., with David Rendell, 63, of Audubon, N.J. 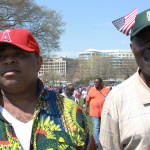 “We cannot do anything without papers. I’m undocumented…I’d like to go to school. In my country [Cameroon] I study PhD of law, but I left because of political problems.” Claude Francois Nzetam, 42, left, with Joseph Tchuiche, 59, both of Silver Spring, Md. 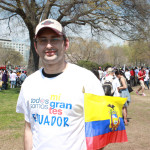 “We’re pretty sure with our assistance here we can do something for an appropriate bill. They can see that we’re together and the community is together.” Christian Valencia, 32, of Newark, N.J.