A long road from Baghdad: Iraqi refugees and Special Immigrant Visa holders in the U.S. 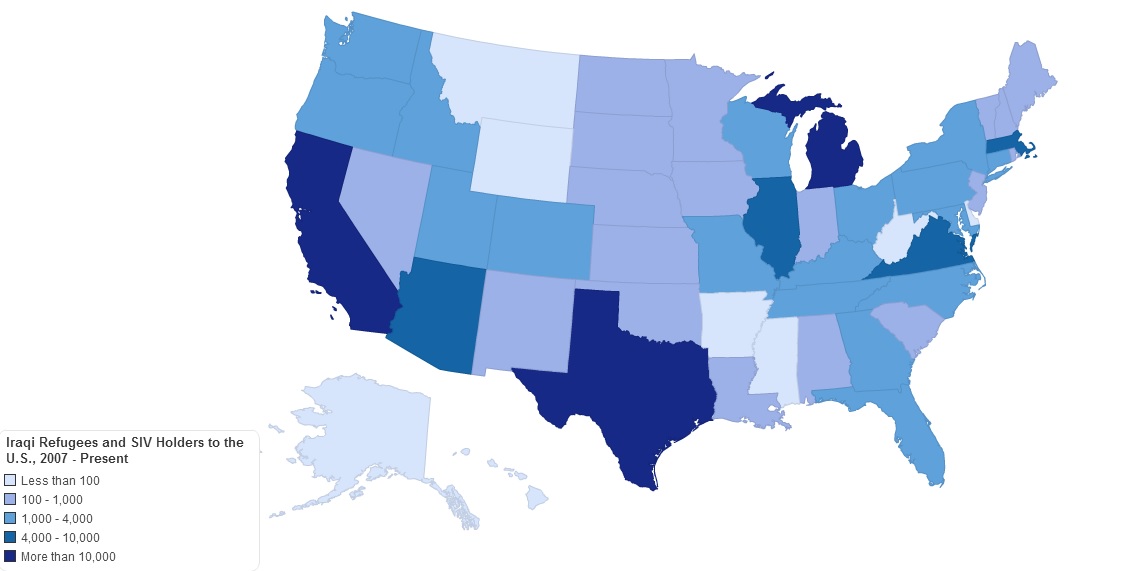 Muhammad Hassoon never heard the crack of the rifle.

The force of the bullet that grazed his scalp four years ago knocked him out cold as he was leaving the gift shop he worked at on Forward Operating Base Falcon in Baghdad, Iraq. His attackers left him for dead – one less collaborator with the Americans. When he came to, Hassoon knew he had to flee the country.

“I didn’t have a choice,” said Hassoon, who is the sole provider for his mother, sister and two younger brothers. “I couldn’t stay in Iraq because they’d kill me, and my family needed the money.”

In June 2011, after the attack, Hassoon was able to find asylum at the U.S. Embassy in Baghdad, where he lived and worked doing laundry for Americans.

He applied for a Special Immigrant Visa, a U.S. government program designed to fast-track Iraqis for repatriation to the U.S. beyond regular refugee quotas allotted to the region. These are Iraqis who had worked for Americans in the country and whose lives were endangered because of this.

The program has brought 13,000 Iraqis like Hassoon to the U.S. since it was initiated in 2008, according to the Department of State. Of these, over three thousand – or 23 percent – have gone to Texas, more than any other state.
The SIV program was slated to end in 2013, but when it became clear that thousands of qualified Iraqis remained, it was extended under the National Defense Authorization Act for Fiscal Year 2014.
The NDA made a special allotment to bring 2,500 additional Iraqis to the U.S. To date, approximately 1,500 SIVs have been issued, and less than currently 1,000 remain.

Hassoon waited for over a year, and was finally notified in July 2012 that his SIV had been approved. Within a week, the American government had put him on an airplane and flew him alone to Fort Worth, Texas.
“I arrived here with nothing, spoke really bad English, and didn’t know where to begin,” Hassoon said.

Like Hassoon, Samah Azeez and her family arrived in the U.S. from Iraq with only their immediate luggage.

Her father died in 2006, when she was 17 years old, leaving her mother to provide for Azeez, her four sisters and two young brothers in the heart of the sectarian violence tearing Baghdad apart at the time.

When the Jaysh al-Mehdi began threatening them – her father had been a project engineer for the new Iraqi government – her mother fled with them to Syria and applied for refugee status to the U.S.

After a year and a half of living in what Azeez modestly described as “economically tough” conditions, their visas were approved and the U.S. flew them to Chicago.

Separate from the SIV program, the U.S. government maintains a region-based quota system to admit refugees such as Azeez and her family to America.

121,321 Iraqi refugees have fled Iraq to the United States since 2007, according to the State Department. Almost half of these – 45 percent – have been relocated to California, Michigan and Texas. California alone has received over 20 percent, or 25,391 refugees.

Despite her siblings’ impeccable academic and professional qualifications, they found even minimum wage employment difficult to come by. American universities would not recognize their academic credentials, and prospective employers were too wary.

“It was a shock: you expected something different, completely opposite,” Azeez said. “The U.S. is supposed to be the land of opportunity, but the only kind of jobs we could get were cleaning offices.”

For many Iraqi refugees, coming to the U.S. has meant a new struggle to survive: poverty, lack of employment and language barriers prove for many to be almost insurmountable barriers.

According to a 2010 Georgetown University Law Center study, these Iraqi refugees are “not faring well” in the U.S.

“Most are not securing sustainable employment, and many are not able to support themselves or their families on the public assistance they are receiving. Some have become homeless,” according to the report.

Furthermore, Iraqi refugees arrive in the U.S. already deeply indebted to the government.

Under the terms of the inter-agency United States Refugee Admissions Program, which administers resettling of refugees, new arrivals must repay the U.S. government for the cost of their airfare to the U.S. This interest-free loan is recouped from garnished wages once a refugee finds employment.

In the case of large families, this can run several thousand dollars.

Through USRAP, the State Department provides resettlement agencies up to $1,800 per person each month for up to 90 days for basic housing, food and essential services.

For Hassoon, this aid was critical. It allowed him a stable beginning in the U.S., and the chance to develop his basic-level English.

“The government gave me $1,700 and got me an apartment,” Hassoon said. “The first year was really, really hard; I don’t know how I would have made it without it.”

Once this public support begins to fade, however, it becomes increasingly likely that Iraqi refugees will slip through the cracks, making support to this vulnerable population difficult.

“It’s often the case that, as refugees seek to integrate in their community, they relocate to a secondary residence to be closer to fellow refugees and ease linguistic difficulties,” said Jamie Diatta, a Department of Homeland Security Special Assistant who deals with refugee issues.

Azeez considers herself lucky to be thousands of miles away from the current strife in Iraq.

Hardly had the U.S. withdrawn combat units from Iraq, the battle against the Islamic State tore through the fabric of the country, perhaps irrevocably.

According to the UNHCR, there were 88,991 registered Iraqi refugees in the region as of February 2014. The actual number is actually much higher: there is no internationally agreed-upon number of Iraqi refugees or Internally Displaced Persons, as it is impossible to accurately count them.

The Iraqi government’s Ministry of Migration and Displacement estimates an additional 440,000 Iraqis have fled their homes since January 2014 due to the conflict with the Islamic State.

Upon her family’s arrival, the scarcity of decent jobs for her and her siblings meant they constantly struggled to make ends meet.

“The first year here was the hardest because we didn’t speak any English,” Azeez said. “We learned English in school in Iraq, but it wasn’t enough.”

Although she missed several years of schooling in Iraq and Syria, Azeez was able to enroll in a year-long English program at Truman Community College in Chicago. She worked diligently to learn her adopted language, even while laboring in minimum-wage jobs.

With her improved language skills, she was able to find a well-paying job translating Arabic for school children in Hyde Park, and was soon able to help improve her family’s finances.

“It took two to three years for things to get better,” Azeez said. “It was a completely new life.”

Now in his third year in the U.S., Hassoon is also beginning to feel like he’s finally made it.

Starting out as a dishwasher in a local restaurant, he’s worked his way up service industry jobs to become a mall security guard, a position which pays well and offers decent hours.

Hassoon is now regularly able to wire money back to his mother in Iraq, and is helping his brother negotiate the lengthy visa process to hopefully join him.

For both Hassoon and Azeez, the last several years have consisted of constant change and an on-going struggle to improve themselves and the well-being of their families.

Azeez has returned to school, and is now a senior studying biology at Roosevelt University in Chicago. She’s preparing to take the MCAT, and intends to go to medical school. Her dream: to become an orthopedic surgeon.

“This is my passion,” she said. “I really want to make this happen.”

Hassoon is talking with U.S. Army recruiters, and wants to join the Army.

Although he couldn’t understand most of what the American soldiers were saying when he was at FOB Falcon in Baghdad, he loved working with them. More than anything, he wants to join their ranks.

“America’s done so much for me,” Hasson said. “I just want to do something for them back.”