Protests Sparking Voter Turnout Only in Some Cities 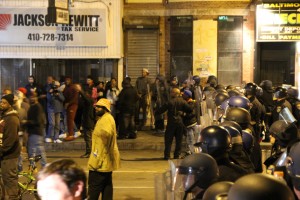 WASHINGTON — In communities where people have taken to the streets to protest injustice, some activists have acted on their convictions by also marching on to polling places to try to bring about change. But it depends on circumstances.

According to election results and voter registration data, an increased number of citizens in Ferguson, Mo., turned out at voting booths in the April municipal elections, the first balloting since a police officer fatally shot Michael Brown on Aug. 9, 2014.

In contrast, voter registration increased only slightly in Seminole County, Fla., following the shooting of unarmed teen Trayvon Martin in the city of Sanford, one of its cities, by George Zimmerman.

Officials in Baltimore, Md., have yet to release voter registration numbers since the protests over the death of 25-year-old Freddie Gray following his arrest by police officers, but experts say Baltimore, especially in light of the history of its criminal justice system, may not portend greater civic involvement.

Ferguson’s April 7 municipal election saw the highest rate of voter turnout in at least seven years, with 24.4 percent of registered voters casting ballots. That more than doubled the 12 percent turnout of the April elections in the previous year.

The election actually changed the face of the city council, voting in two African-American candidates, in Ward 1 and Ward 2, which tripled the number of black council members from two to six.

Alison Dreith, former statewide organizer for Missouri Progressive Vote Coalition and legislative coordinator for Don’t Shoot Coalition, said the protests over the Michael Brown shooting mobilized a city that had seen registration decline. In the past several years, many of its family support centers where people obtained food stamps and unemployment benefits had closed.

“All of the social workers [at the center] have to ask if they want to register to vote, so because a lot of those offices closed, especially where Ferguson is, the number of drop outs of those registering has gone down astronomically,” she said.

Voting in Ferguson actually declined in the November election which fell in between two waves of protest, she added. But that soon changed.

“It also happened to be the time when the prosecuting attorney for the case said that the police officer would not be charged, it came out after election day,” she said. “After that people got really pissed off and so that’s why you saw that bigger turnout.”

She is also hopeful that the higher participation level will continue.

“A lot of organizations have been sprung out of the movement, so as long as they keep on working then maybe voting in that area will continue to have better turnout,” she said.

In Seminole County, where protests erupted after Trayvon Martin died, the story was much different. Voter registration saw a slight bump in March 2012, the month after the 17-year-old was fatally shot by neighborhood watch volunteer George Zimmerman. Voting also increased in the August following Zimmerman’s July 2013 acquittal but subsequently dropped to even lower levels than previously, before going back up in 2014.

Lance DeHaven Smith, a professor in the public administration and policy department at Florida State University, has studied elections in Florida for years and gave several reasons for the mild reaction. The first was the differing nature of the case in Florida compared to Baltimore and Ferguson.

“[Zimmerman] was basically an isolated individual, not viewed as part of a government police force, so it wouldn’t necessarily translate into anger at the government,” Smith said. “Now, it could be also, it’s really a state government issue because the state has this ‘stand your ground’ law, and that’s been seen as problematic to these events.”

In addition, President Barack Obama’s campaign organized the largest voter registration drive the state had ever seen in 2008, boosting registration to 259,336 voters from 244,642 in the 2006 general election. The numbers remained high in 2012, with 277,376 residents registering.

It was unlikely that the number of voters would grow much more, he said.

“It’s like squeezing juice of lemon,” he said. “At first there’s a gusher out and after that it’s a drop.”

“It takes an awful lot to mobilize voter registration for something to happen. When we think about changes in turnout and registration, the numbers are usually pretty small to begin with. It may not show up in Seminole County. It’s a pretty large county, so it may be buried in that. If it was limited to the city, the concerns were.”

In Baltimore, the death of Freddie Gray while in police custody sparked days of protests in April 2015. Some experts are pessimistic that the outrage will translate into greater civic involvement. The city’s exact voting numbers since the death of Gray have not yet been published.

The Maryland State Board of Elections does not release new voter registration statistics by month. Total voter registration numbers, however, show a general declining trend over the past several years, though the total edged up from 362,358 people in March to 362,559 in April this year.

“People are upset in Baltimore and it’s long standing; it’s not just happening with the protest and leading up to it,” said Jeffrey Ian Ross, a criminologist at the University of Baltimore. “We have a lot of history of criminal distrust and practices in the city.”

Ross said many are unhappy with the criminal justice system for a number of offenses, such as leaving people in a detention center for more than 24 hours before standing trial for minor charges, often seeing the charges dropped. “They feel abused, alienated, angry and want change,” he said. “They lose faith in elected leaders.”

Significant differences between places like Ferguson and Baltimore may also contribute to a different outcome for Baltimore.

“When you have a majority black city council, mayor, chief of police is black, there might be a racial component and people who felt disenfranchised before, are they registering?” said Elizabeth Nix, a historian at the University of Baltimore, who has worked on a voter registration project at the university. “It’s unclear if that’s going to have the same effect or if people here are going to think, ‘Oh, if only we had different leaders, that’s going to make a big change.’ So that’s a huge political difference.”

“In these moments people are more politically aware and want to participate, so it’s on the radar,” she added. “But I don’t know if people see it as something that’s going to change a lot.”

Even if instant change doesn’t occur through the ballot box, the effect of the protests may manifest into involvement in more unexpected, less immediate ways, Nix said.

“I think it’s important to kind of acknowledge how many young people got energized – even people who can’t vote yet,” she said, noting that the celebrated debate community around Baltimore has generated many young and college-aged leaders. “So the young have a political movement and who knows what they could do, but they could be having political careers in the future.”