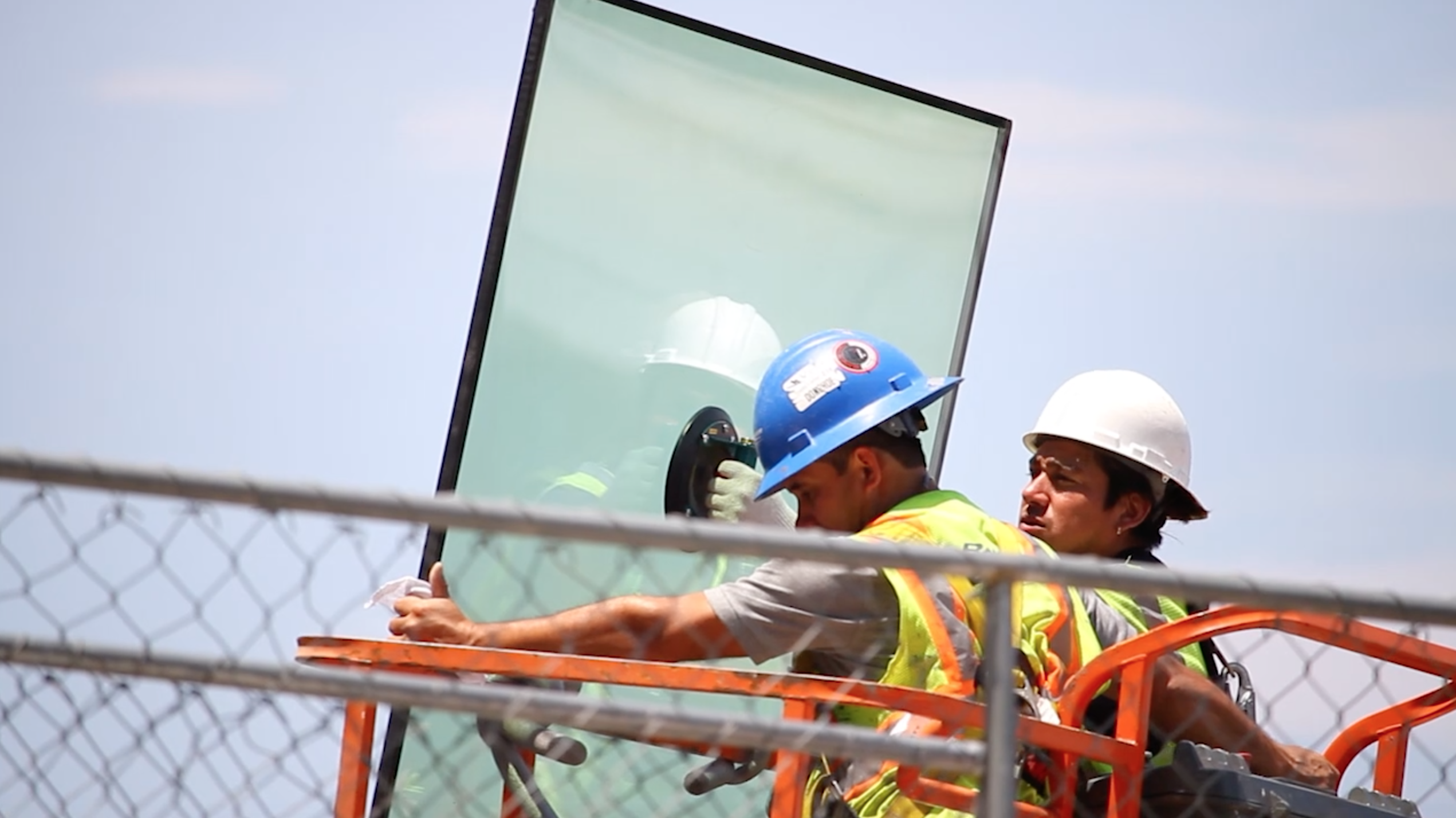 WASHINGTON — Young Hispanic workers face the most occupational danger, and that does not surprise Jo Bany Reyes, a 21-year-old El Salvadorian immigrant who has been working on construction sites for more than three years.

According to a report recently released by two organizations that examine worker safety and health issues, Hispanic workers under the age of 25 who work for construction firms with fewer than 20 employees are identified as the most vulnerable to work-related injuries in the U.S. One of the reasons, the report asserts, is lack of safety training.

When Reyes worked for the Ranger Glass East Coast Inc., which is under a specialty fenestration company based in Houston, he said he never received individual pre-work training.

“You didn’t know what you were doing. There was a lot of confusion,” Reyes said when he recalled the experience of first stepping in a construction site. “I think when you got too nervous, you ended up doing something that would be really bad.”

About a year ago, Reyes said he witnessed heavy glass materials fall off accidentally from the 14th floor of a project site, leaving no one hurt but a hole in the concrete. Reyes said the accident happened because he and his co-workers did not receive proper training on hoisting the materials.

“It was really frightening,” he said. “It just made me realize that in every construction site, safety is always the main priority.”

Reyes no longer works for the company. He said he left to pursue better opportunities.

But Ruddy Gutierrez, 21, of Bolivia, who was once Reyes’ co-worker, is still working for Ranger in Tysons Corner, Va. Gutierrez is one of a crew of nine works.

There were no organized safety courses, Gutierrez said, and he has learned most of his job from senior workers, who would sometimes get annoyed teaching him how to do things.

A spokeswoman for the company’s headquarters denied the accusation, but declined to offer more information.

“Construction is inherently a high-risk industry. It is even more so for Hispanic immigrants,” said Christine Branche, principal associate director at the National Institute for Occupational Safety and Health, which co-authored the report.

“Hispanics were the only ethnic group from whom we saw an increase in the number of workplace fatalities in 2013,” Branche said.

David Benitez, who is an undocumented immigrant from El Salvador, was one of the few who stood up for his rights. He worked at construction sites since he immigrated to the U.S. in 2005. About half a decade ago he went on a strike with other ironworkers against his company, Wings Enterprise Inc., where he worked for three and a half years.

Benitez, who is now 33 and working at a restaurant, said he faced many hazards when he worked as a construction worker.

“It’s a story of exploitation on the job,” Benitez said through an interpreter, “of being part of the workforce that would not be given water and were not trained on health and safety, and of knowing that the work that I do is extremely risky.”

Wings Enterprise Inc. denied the allegation. “If what Mr. Benitez says about Wings Enterprises Inc. were true, I would have been out of business a long time ago,” said Jean T. Wanner, president of the company. “There is no discrimination.”

In addition to Benitez, nearly two million Hispanic immigrants accounted for about 20 percent of the construction workforce in 2013 in the U.S., according to statistics released by the U.S. Census.

The rapid growth has been accompanied by an increasing numbers of occupational injuries. According to the report, Hispanic immigrant workers experience the highest occupational mortality rate, which is 5.9 per 100,000 full-time-equivalent workers in 2013, and cases of nonfatal injury or illness among the Hispanic construction workers nearly doubled from 17,700 in 1992 to more than 33,000 in 2006.

As an undocumented immigrant, Benitez said he received substandard treatment from Wings and others construction companies he used to work for.

“When we [undocumented workers] get injured,” he said, “the company would refuse to report to OSHA, forcing the workers to pay for their own medical cares. I think it’s completely unfair and unjust.”

The Occupational Safety and Health Administration, or OSHA, is the main federal agency, under the U.S. Labor Department, charged with the enforcement of safety and health legislation to assure safe and healthful working conditions for workers.

The report found that a multitude of knowledge, cultural and structural barriers contribute to the disparity in occupational injury experienced by Hispanic immigrants.

The anti-immigrant voices in workplaces and across the nation also increase the vulnerabilities of Latino workers, said Hector Sanchez, executive director of the Labor Council for Latin America Advancement, a national organization representing the interests of Latino and trade unionists throughout the United States and Puerto Rico, according to its website.

“A lot of employers abuse them because of the fact that they are undocumented workers,” Sanchez said. “Congress is moving in the opposite direction instead of offering more regulations to protect workers.”

As the report suggested, one possible contributor to young workers’ vulnerability might be adolescent risk-taking and sensation seeking, which would be the desire to pursue novel and intense experiences.

According to a survey conducted by the Centers for Disease Control and Prevention in 2010, during 2003 to 2007, the construction industry accounted for the second greatest number of fatal injuries among younger workers, after the service sector, which was a broader group.

“Lack of job knowledge and skills, lack of job training and lack of job control also contribute to heightened risk among younger workers who might be less likely to recognize hazards and less likely to speak up regarding safety issues,” Branche said.

Schneider said young workers were less hesitant to take risks on the job because they wanted to impress employers.

“They are starting out on the jobs,” he said. “They want to prove they are good workers. They have been taught to follow directions to get the job done.”

Reyes was one of the workers Schneider described. He said he would take risks at work to keep the pace with more senior workers, although he said that should not excuse employers from educating staffers on safety issues.

“If I have to lift something really heavy that I feel like I can’t,” he said, “but I did it just to stay on the same page with my co-workers.”

According to the latest data reported by the Center for Protection of Workers’ Rights, however, in total 125 construction workers aged 18 to 24 died from work in 2011 and 2012. The fatality number was relatively small compared to 460 deaths for those between the ages of 45 and 54, who accounted for the most at-risk workers in the construction industry.

The report suggests that about 90 percent of construction businesses employ 20 or fewer workers. That large portion of workers takes a heavy burden of injuries.

Branche said smaller companies have more occupational injuries, illnesses and fatalities largely due to a lack of available resources specifically devoted to workers’ safety and health.

Schneider agreed. “A lot of construction firms, particularly small contractors, are working on very, very thin profit margins,” he said, “because they are using low-bid contracts in lots of these jobs, and everybody is trying undercut each other. They cut corners, and safety tends to be cut first on some cases.”

Reyes said with the financial burden, small companies would provide their workers with safety equipment that were workable but not durable.

“If they see something that is worth $1,” Reyes said, “if it works, they will use it. All that matters is if it works and if it is cheap.”

“A lot of these small companies are, like, three guys on a truck,” he said. “How do we reach them and try to change their ‘culture’? It’s not an easy question.”

“This report signals it’s an important wake-up call for everyone responsible for creating safe workplaces,” said Patricia M. Ennis, president of American Society of Safety Engineers, a co-author of the report.

The global association of occupational safety professionals has been offering safety and health training to workers around the world, which Ennis said was one of the ways to solve the problem.

Sanchez proposed a five-point plan, including a strong federal regulation to protect employees who report safety infractions, harsh civil and criminal penalty for safety violations and more resources for regulators to inspect unprosecuted violators. He also said there should be less anti-union legislations and more third parties that participate in the protection of immigrant workers.

Schneider said the most important step was a comprehensive immigration reform that would enable and encourage immigrant workers to speak up their problems.

“People have rights to speak about their safety problems and not get discriminated under OSHA,” Schneider said, “If it’s safe to speak up, it’s safe to work.”