New satellite to transform environmental tracking, but at what cost? 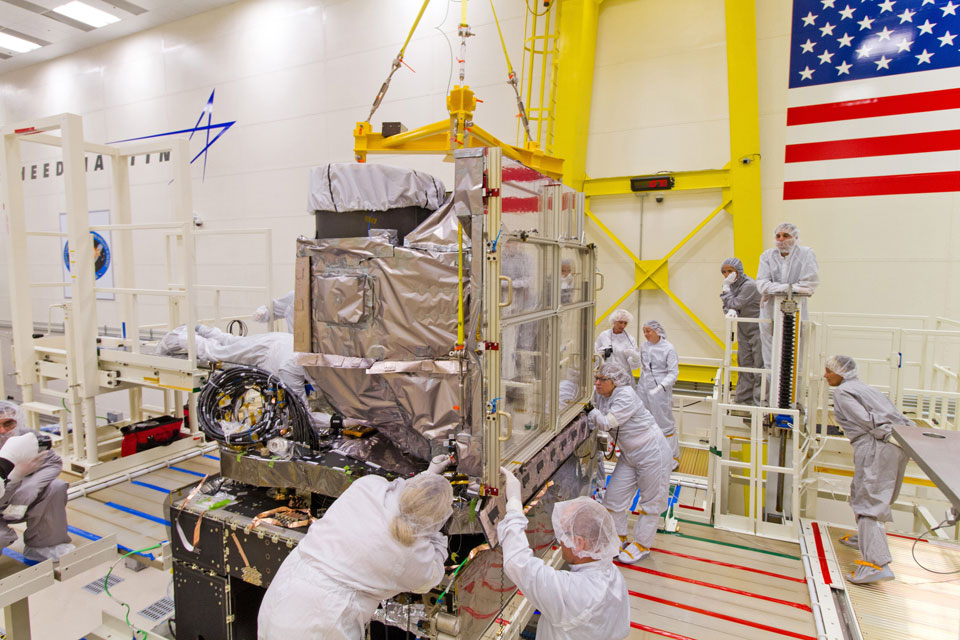 Photo Courtesy of the NOAA

WASHINGTON – For 40 years, the United States has sent Geostationary Operational Environmental Satellites (GOES) into orbit, where they are producing images every 15 minutes in geosynchronous orbit, approximately 22,300 miles above Earth. They provide cloud, land, and ocean temperatures; monitor activities of the sun; and relay emergency locator beacon signals to assist with search and rescue activities.

The GOES R-Series, which is the next generation of GOES satellite, is scheduled to launch in March 2016. The joint project by NASA and the National Oceanographic and Atmospheric Administration (NOAA), has not been without at least some delays and problems, which have been caused by both contracting and technical issues.

But GOES-R will offer a number of significant improvements in geostationary environmental data provided to the National Weather Service and the broader weather forecasting community.

This means users can get much higher resolution pictures of the clouds with faster update speed. The National Hurricane Center (NHC) and the Storm Prediction Center (SPC) can take advantage of it to forecast extreme weather more timely and accurately.

Major instruments on the GOES-R series of satellites will be:

One of the biggest challenges at the beginning of the project was contract management. The risk and increasing cost have long been a concern due to the slow progress in the early contracting phase and development delays, according to one private contractor who spoke on the condition of anonymity because he was formerly involved in the project.

In 2013, the Commerce Department’s Office of Inspector General issued a report that found NOAA had delayed finalizing negotiations for almost a year to two years on its six significant changes to the core ground system contract.

Because of these delays, the government lost the opportunity to negotiate costs on an estimated $79.6 million, according to the watchdog agency of the Commerce Department, which oversees NOAA. In 2013, the ABI, GLM, and the spacecraft overran their contracts by $264 million, $86 million and $11 million respectively, resulting from contractors’ underestimating the effort and technical complexity of the instruments, immature designs, and difficulty managing subcontractors’ cost increases and schedule slips, according to OIG reports.

The latest OIG report also points out that the revised launch schedule will still pose a challenge for the program to meet, due to past schedule performance and a complex integration and test process. Those delays could leave the GOES-R on-orbit constellation without a backup satellite for 29 months out of a 33-month period from April 2015 to January 2018.

However, the former project source said, delays in the early stage may not be a bad thing because they are designed to help avoid significant problems that plagued past satellite projects.

“Thankfully separate contracts for the instruments, spacecraft, and ground system as opposed to the discredited NPOESS (The National Polar-orbiting Operational Environmental Satellite System) one-contract-for-all failed approach,” according to the former contractor. He said this single-source mode of contract, combined with the absence of oversight by the Goddard contract office, caused soaring costs, delays and other problems that ultimately result in the implosion of the NPOESS contract.

“It was a disaster until NOAA finally pulled the plug on it,” said the source.

Going forward, the agency wanted to avoid a reoccurrence. “The decision was finally made to return to the traditional procurement methods for GOES-R,’’ said the source. “Thank God.”

Given the nature of complicated satellite contracts, GOES-R is not perfect.

According to the latest OIG report, the lack of experienced engineers for key positions in the early stage contributed to schedule delays and core ground system contract cost increase. NOAA replies that they “will continue to review the effectiveness of efforts to ensure staffing for the GOES-R and other programs are properly allocated to meet the mission.”

The measures taken to mitigate the risk and cost, and to prevent further delay, is basically to sacrifice part of the functionality of the whole system. In 2006, NOAA decided to reduce the scope and technical complexity of the GOES-R program for the expectation of huge cost raise.

For example, the Hyperspectral Environmental Suite (HES) was selected to remove from the baseline program because its main function – atmospheric sounding – is not the core requirement for the mission which is improving weather forecasts and warnings. Indeed, HES would have new capabilities in coastal ocean imaging, but data can be obtained via other ocean satellites.

The scope of the GOES-R Series Program was established in 2007 and has met all the requirements. “The program has been providing sample data to users through our Proving Ground project in preparation for the new capabilities for a number of years, and the users are very excited about the new capabilities available once GOES-R becomes operational,” said Leslie.

This May, Harris Corporation, the prime contractor of the ground segment, has successfully completed the final two tests. The ground system is now ready for use after nearly 500 defects were removed since 2014. In addition, the GOES-R ground segment architecture now has a more flexible design after a recommendation by OIG. It will support additional requirements in the future.

On June 3, Lockheed Martin, the prime contractor of the flight segment has completed assembly the satellite. It is now undergoing extreme weather condition testing about what the satellite might experience in space.

Once launched, the GOES-R satellite will be placed into an orbit where the spacecraft and instruments will go through post-launch checkout for approximately six months followed by an extended product validation phase with observational data provided through the 2016 Atlantic Hurricane Season, according to Leslie.

Once that process is complete, the data will be accessed by forecasters in the public and private sectors for monitoring hurricane tracks and winds in the Atlantic, and severe storms in the Midwest, said Nancy Colleton, President of Institute for Global Environmental Strategies. The data will eventually be integrated into storm scale forecast models that will significantly reduce the time need to identify weather conditions.

However, Colleton said that it can be big challenge for the community to sift through the great amount of data – approximately 3.5 terabytes per day – to fully exploit the satellite’s capability. The decision on where to place the satellite will be made after analysis of the data from the GOES-R instruments and an assessment of the performance of the existing GOES satellites and in consultation with the needs of the National Weather Service.

“GOES-R will be game changing. There is incredible enthusiasm in the community for what this satellite will deliver and how forecasts will be improved,” Colleton said.