Thawing U.S-Cuba relations have ‘no impact’ on naval base 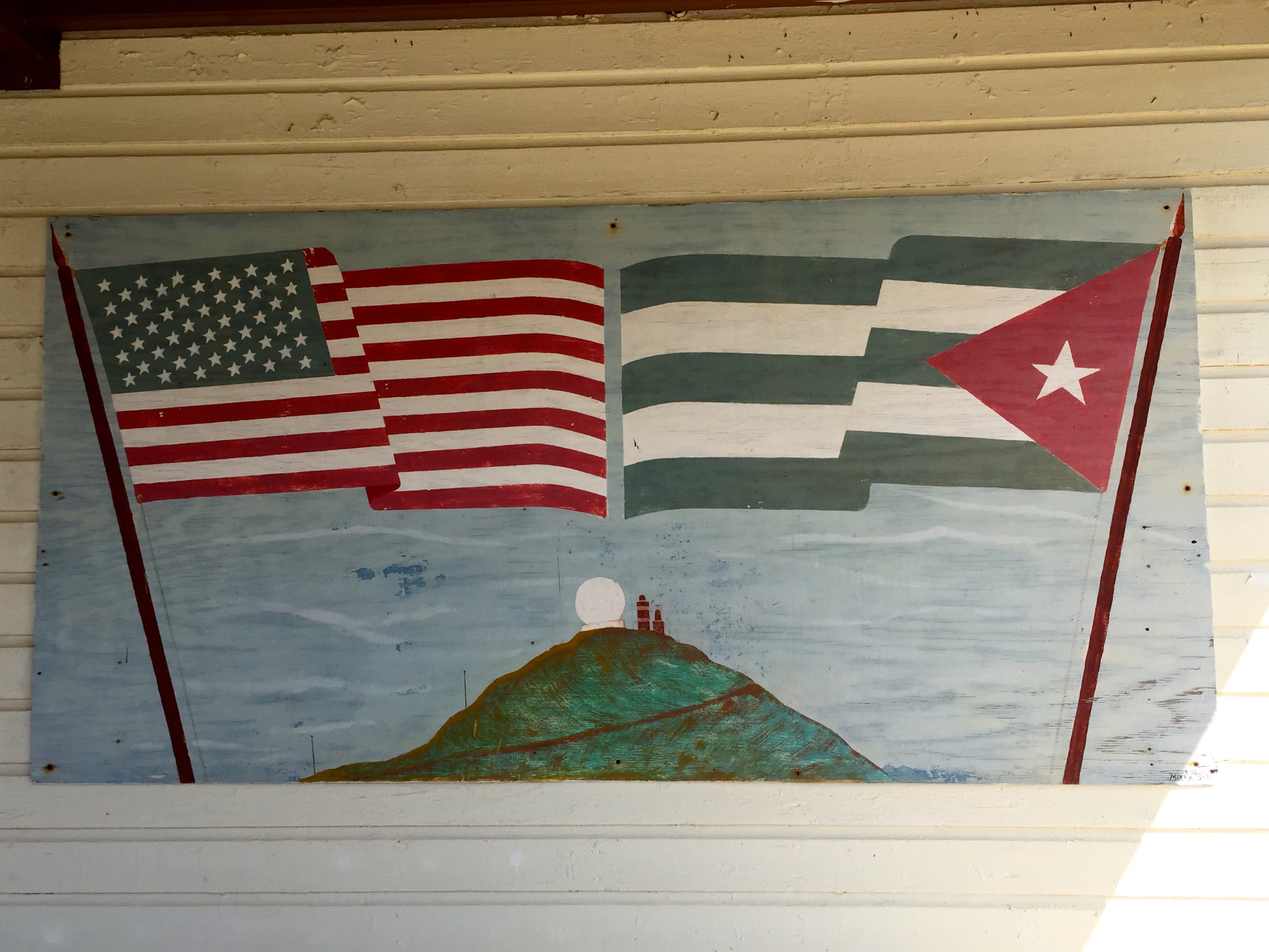 A painting shows U.S. and Cuban flags flying outside of the Guantanamo Bay Lighthouse Museum.

NAVAL BASE GUANTANAMO BAY, Cuba — Normalization of relations between the U.S. and Cuba will not immediately impact the American naval base at Guantanamo, officials said this week.

In other words, for now, it’s business as usual.

Cuban flags were hoisted Monday at the Cuban embassy and at the State Department in Washington, marking the end of over 50 years of ruptured diplomatic relations going back to 1961, when those relations were abruptly severed.

But at the U.S. Navy base in Guantanamo Bay — on the far opposite end of Cuba from where the U.S. embassy in Havana has re-opened for full diplomatic business — it was as if nothing unusual had happened.

“There’s no impact on the base at this point. We’re continuing to execute our mission here,” said Kelly Wirfel, public affairs officer for the base, the U.S. Navy’s oldest overseas outpost.

“Those discussions for the normalization of relations are all at a higher level than what is happening here in Guantanamo Bay,” Wirfel said.

Those sentiments were echoed by Capt. Christopher Scholl, director of public affairs for the Joint Task Force in Guantanamo Bay, which operates independently of the naval base.

“Nothing is changed for us,” Scholl said.

Havana has repeatedly called for the return of the Guantanamo base, leased to the U.S. in 1903.

In a 1934 treaty reaffirming the lease, Cuba granted trade partners free access through the bay and added a requirement that the termination of the lease requires the consent of the U.S. and Cuban governments, or the abandonment of the base by the U.S.

When diplomatic relations were officially restored Monday, Cuban foreign minister Bruno Rodriguez repeated the country’s request for the “return of the illegally occupied territory of Guantanamo, full respect for Cuban sovereignty and compensation of our people” in order to move the relationship forward.

But Secretary of State John Kerry, who will travel to Havana on Aug. 14 to raise the American flag over the U.S. Embassy, later said: “At this time, there is no discussion and intention on our part … to alter the existing lease treaty or other arrangements with respect to the naval station in Cuba.

“We understand Cuba has strong feelings about it,” Kerry went on. “I can’t tell you what the future will bring.”

Wirfel said the topic of returning the base to Cuba had not been broached in any way with the base commander, Capt. David Culpepper.

These days, the U.S. Navy holds monthly fence-line meetings with the Cuban frontier brigade. The sessions are held in converted Marine barracks near the 17.4 mile-long security fence. Culpepper conducts the administrative meetings to discuss upcoming scheduled drills with the Cuban representatives.

Wirfel said the base also is preparing to participate next year in Integrated Advance, an exercise to prepare for a “mass migration event.”

In the 1990s, the base conducted Operation Sea Signal, providing humanitarian assistance to 50,000 Cuban and Haitian migrants who flocked to Guantanamo following political and social upheaval in their countries.

“Certainly the naval station … plays a huge role in a lot of things that happen in the Caribbean,” Wirfel said.

While the Navy’s mission will remain unchanged for now, unexpected shifts in daily life soon may ripple across the base.

Foreign contract workers on the base today are mainly Filipinos and Jamaicans. Before relations were cut off with Cuba, those jobs were filled by Cuban workers. If relations continue to improve, the base’s contractor workforce may see more Cubans.

Another change: Now, children born on the base are not immediately considered U.S. citizens, and must apply for a consular birth report abroad through the U.S. Embassy in Jamaica. When the U.S. Embassy in Havana is fully operational, American diplomats there may take over this role.

While the relationship between the U.S. and Cuba thaws, at least in terms of civilian travel to Havana, the limbo for sailors stationed at Guantanamo Bay — who are restricted to the 45-square-mile base and are prohibited from traveling into Cuba itself — remains.