Protesters seek an end to U.S. financial support of Pakistan 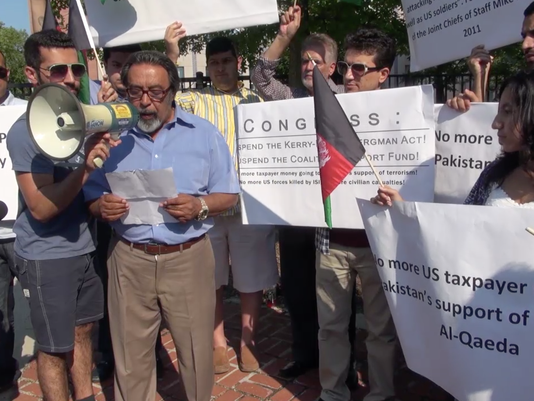 WASHINGTON — Roughly 50 demonstrators rallied in front of the Pakistani embassy Friday in Washington, D.C., many demanding that Congress stop U.S. financial support of Pakistan, a country that they and others accuse of supporting the Taliban.

“I object to any kind of military support going to Pakistan when they have shown a pattern of behavior that has put American lives in danger by supporting the Taliban either directly or indirectly,” said Bilal Askaryar, an Afghan-American graduate student at American University and the protest’s primary organizer.

The protest’s impetus was the Afghan government’s announcement in late July that the Taliban leader, Mullah Omar, died in a Pakistani hospital in April 2013, according Askaryar. It is almost certain that Omar had lived in hiding in Pakistan, like Osama bin Laden, according to multiple reports.

The protesters, many of whom were Afghan-Americans, also wanted to highlight recent terrorist attacks in Kabul and the recent civilian death toll in Afghanistan.

“[It] is increasingly baffling that we are sending billions of dollars of aid to Pakistan,” Askaryar said.

But a State Department spokesperson in an email noted that the Pakistani military in December successfully targeted Adnan Shukrijumah, a senior al-Qaida leader who was accused of plotting to blow up the New York subway. They also detained and deported to the U.S. Muhanad Mahmoud Al Farekh, an American citizen who was charged with providing material support to terrorists, earlier this year.

The U.S. shares a “common enemy” and a “common cause,” and “stands in solidarity with the people of Pakistan and all who fight the menace of terrorism,” the spokesperson said.

As he stood outside the Pakistani embassy, and in an earlier phone interview, Askaryar argued that Pakistan’s intelligence agencies and military academies are “incompetent” when it comes to dealing with the Taliban. In some cases, he said, he believes officials are complicit with the Taliban because they might know where the Taliban are located, for example, yet do nothing to stop them.

“So instead of the Taliban getting weaker, they manage to retreat across the border and come launch their attacks against U.S. troops and innocent Afghan civilians,” he added.

According to a New York Times report, Pakistan promised Afghanistan’s President Ashraf Ghani that Omar’s successor would not be named on Pakistani soil. Days later in Quetta, however, a new Taliban leader – Mullah Akhtar Muhammad Mansour – was named. Mansour’s deputy comes from the Haqqani network, which is closely linked to ISI, Pakistan’s military intelligence service, according to .

Attacks over a four-day span in the Afghan earlier this month left close to 70 people dead, sparking Ghani to ask Pakistan officials to attack the Pakistan’s Taliban havens.

The United Nation’s mid-year report on Afghanistan found that within the first six months of 2015, the Taliban was responsible for nearly 5,000 civilian casualties, including more than 1,500 deaths.

Pakistan is a top beneficiary of U.S. aid. According to a May 2015 Congressional Research Service report, Pakistan has received more than “$20 billion in economic, security and humanitarian aid, and military reimbursements.”

The U.S., under both the Bush and Obama administrations, has considered a relationship with Pakistan vital to combating terrorism.